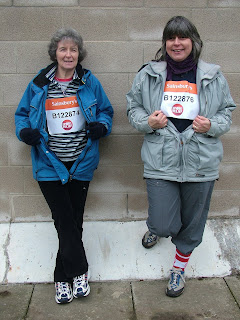 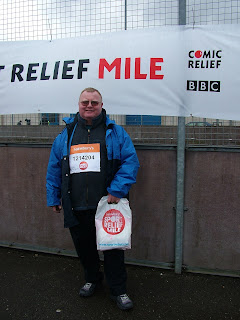 Sunday went quite well not many people there ,but weather was bad
We [Sister in law husband and of course me] set off round the field it was very windy.
A lady was doing the mile backwards in a very big cape I thought she would take off, but she did not, and finished the mile.
A nice surprise at the end we got a goody bag with raisins, drink and a book .
All so Paul bought me a T shirt.
It was a good day I enjoyed it.
I can honestly say it was the slowest mile I have ever done , 25 Min's no problems going round or after .

I am hopping to do the race for life next month as it is 3 miles, I will need to take the wheelchair but don't plan on using it too much it all depends on the day and how I feel.
No comments:

well here I am to update again.

Tank much the same, missed a few because of a cold .

Wietse has all so bean ill so have not have physio for 4 weeks i think it had a bad effect on me as I have had a lot of extra pain so much doc had to up tablets.

The burning continues in my foot reaching a lot of time past my knee, I wore winter tights for a few days and legs seamed very sensitive and hot but felt cold to the touch, very pain full at times My shoulders and wrists are about the same as before.
I think the RSD has entered another level as things have bean a bit different, or is it just the weather.

Back at physio now Wietse did usual acue all so, something different with a pen like thing, on my foot and up to my knee .I asked him what it was he said it was not acue pressure, not acue, I said it must be a wietse Special .I know it hurt.

At last I took to the roads for quite a long bike ride (sat 8th ) to Skellingthorpe not the best day to choose as it was very windy .
I went down Dixon Street ( a Street very close to me) a bus came past and I nearly Sh** myself
but I got there safely and back without getting lost I think its a 10 mile round trip so I was very pleased. I peddled a bit and used the electrics its goes pretty fast with a back wind and not bad with a head wind.
I did not seam to suffer any after effects in fact I think it helped loosen my muscles.


I watched a film the other night called The Brave One staring Jodie Foster she had bean through a lot to say the least and was asked how she coped, she said you become somebody else ,
I think that is what I have done

I have entered The Sports Relief Mile walk this weekend with my sister in law so I will let you know how I get on really looking forward to it well bye till next time.
No comments: