Hi, its me back from the land of pain. This blog will be brief as Octobers will be here soon but I feel I need to update you all.

Doctors again, I can not get on top of this pain. He has told me to up my GABAPENTIN at night to see if this helps. My pain is a lot worse if I am not moving a round so I try to keep active when I can. I spoke to him about my neck and he thinks it might be a compressed nerve.

Got Suey for the day Lindsay's dog so her and Summer are going mad chasing each other through the house. About tea time I felt sick and dizzy my words were slurred I had trouble standing up.I went to bed and was sick till my stomach ached and my back was going in to spasms. I slept very little listening to my iPod instead.

I have at last stopped feeling sick but feel very battered. I only took the minimum of tablets as not to make it start again 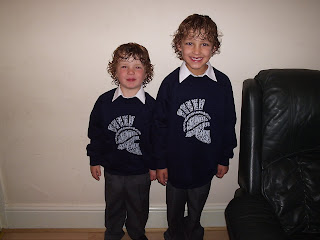 Big day, Tommy-Lee is starting school. Jay-Jay is going to the same one as well. When I spoke to them both later on in the day they said they had enjoyed their day. Tommy-Lee said some of the girls were touching his hair, he said he liked it though. Jay-Jay enjoyed the day as well. I was pleased they both had a good day.

Pilates today I am having trouble with my neck again when I turn my head and getting quite a lot of pain and pins and needles down my arm. A lot of spasms down my leg at least my stomach is better.

Tommy-Lees 5th birthday we have got him a remote control tumble car with flashing lights. He loves it, Jay-Jay does as well. We got him some clothes and I made him a cake. 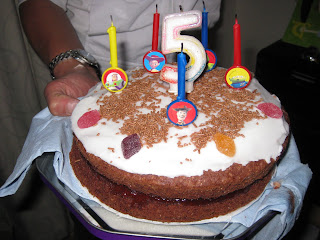 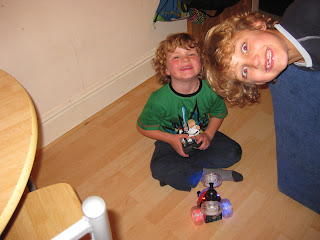 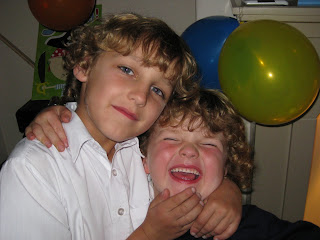 I love you brother.

Physio
Good to see Wietse again, about 12 needles in and around my neck and ears. He was going to use the electrics but it was not charged up. He agrees with my doctor about the nerve in my neck. Hopefully he can sort it out.

An appointment today for my nose most of the bleeding has stopped. He told me to use the cream every day not just for the two weeks that I was told last time. He all so cauterised it, I hate the smell of burning and the taste it leaves behind. Otherwise he was pleased and signed me off.

I gave Summer a lamb bone, she loved it. After a while she no longer had it. I went into the garden and she had buried it near the rhubarb. Later she dug it up again had a bit more. then reburied it, it was so funny. One very mucky white dog. 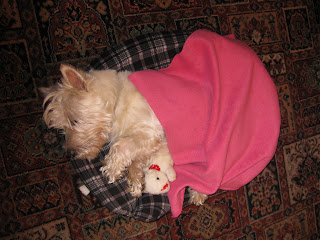 Tired out after all that digging.....

Physio Wietse had trainee with him and he was very interested in my RSD. We talked quite a lot Wietse filling him in with the medical info. Had a session of electric acupuncture, little pulses down the needles. My neck is very tight and shot out one of the needles he said he would hammer it back in, it felt like he had. The electric felt very soothing

Paul and I are going to Halifax to see Wayne and stopping the night. The journey was very painful, my shoulders were very tight, infact pain just about every where. Some days I can travel with no pain or not much and others loads of pain - it does not make sense. When did RSD make sense any way. The ride otherwise was good no hold ups. We had a Chinese takeaway for tea. Bed early for me about one as I did not know how to sit to ease the pain. Not a lot better in bed either. A trip in the town was good not too much pain. We had a pub lunch which was very good. His cat Timmy was playing as well. All to soon it was time to set off home again. Lindsay had summer so she will be having a good time with suey and the boys.


21st
Pilates was quite painful and hurt with every move. Took an extra BACLOFEN maybe that will help. I sat down to rest for a while felt a bit sick. Went on to pick the tomatoes and water the greenhouse. Then I felt very sick and had trouble standing up. I just made it to the bathroom and was violently sick, this went on a long time. I passed out.

When I came to. I was sort of half laid on the cold tiles with Summer tucked under my chin I thought it was the bath mat. I pulled my self up and walked like a drunk to the settee to lay down. Paul came in and I asked him why he was home and he said it was four o'clock gone. I some how had lost two hours. The sickness started again and I started shaking a lot. Paul called an ambulance. I was in and out of consciousness for a long time. Kept in the over night at the Hospital. The doctor said to Paul he was concerned that it might be an drug overdose because of my junkie eyes . Paul explained about the strong drugs I was on . He said he seemed happy with that.

Blood pressure a bit low so it was decided I had to stay a few more days. I had trouble standing. My foot will not like this as it likes to be active. Moving to Burton Ward soon.

Feeling worse than I was lot of RSD pain put on oxygen as levels are low. A doctor came today who knew about RSD he said he would put me on ORAMORPH every two hours as needed. Boy did I need it. Lindsay was there as well . This is the first time I have ever spoken to some one at the hospital that knows anything about RSD. Started wrenching over night, two nose bleeds and my stomach is very sore. There is a lady here that shouts a lot and wakes everyone up. She cant help it but when I am in a lot of pain it does not help.

I have bean having CALAGEN drinks to build me up. Quite a bit better but very tired as had no sleep last night. My eyes are very sore and sticky. A swab has bean take to see what it is. Played a game of dominoes with another patient on my bed. I am now off the oxygen as my levels are better. Another nose bleed.

I had a shower with help today it felt really good. My eyes are still very sore. Paul brought my wheel chair so I can go to the bathroom on my own instead of waiting for a nurse. I still have not walked really since I came in as my foot is very swollen and hot, and will not tolerate any weight on it.

Lindsay brought the boys to see me, they brought me a balloon each. When Tommy-Lee gave me his there was only the stick, the balloon had dropped off, his face was a picture. That cheered me up a lot.

Physio came but my foot would not let me put weight on it. I said I can carry on at home as it has happened before, but they said no as I need to be walking before I go home. I said I did not walk in here so why do I have to walk out?
Pain clinic also came to talk to me they have increased my GABAPENTIN to 1600 mg a day I was on maximum a day of 900mg. Also my OXCICONTIN has doubled from 10 to 20mg a day. I feel very light headed as well. At last cream and drops for my eyes, very soothing.

A better sleep but I feel worse for it. Left eye was closed when I woke very sore and red. Having lots of ORAMORPH for the pain it is getting out of control. Went to the toilet and felt dizzy and in pain, but could not get back on the wheelchair. I held on to the grab rail and must have slid down and passed out.

When I came round I was laying on the floor very cold. I shouted but the ward is very busy so was not heard. Then I started banging the foot rest on my chair. There is a lot of building work going on so every thought the banging was the work men. The light went out as they are motion detected I was in darkness. After quite a while I was missed and at last some one came. I only hurt my ankle. I was put in bed and obbs were taken. I was fine apart from being so cold.

We are having a Autumn like Summer very hot, and I am stuck in here. I miss my pup.
Doctors came round and said just carry on the same. Some more drops and cream have arrived for my eyes. My foot is going into spasms all the time and more painful than it was. Lots of pain and burning. I am having a lot of extra ORAMORPH. My pain levels are bad. Rang Wietse and asked his advise. He said don't let any one touch it. I am to raise it up on a pillow behind the knee and massage it from the knee down and try to keep off it. My foot is burning like a fire. My shoulders are also on fire I am fed up. I can do this at home.

To be continued in Octobers blog.