I am still the same Gill, even if I can not be quite the same as you.
But please don't forget me I am still here, so please remember me do.

My days are long, my nights are longer.
So please help me to get more out of this life and to get a lot stronger.

After a while of repeatedly getting knocked back down to the floor.
There comes a time when I am unable and unwilling to get up any more.

People some times make me promises they have little, or no intention to keep.
But what they don't understand is, its all I have got to look forward to, sometimes for the week.

I spend a good deal of time on my own.
Mostly people not bothering to call round, or even to phone.

I cannot always get out, the pain can be too bad.
But spending all day on my own makes me feel very sad.

Please under stand me I still need my friends the new, and the old ones even more.
Please remember me for who I am now, not for what I used to be be for.

I wrote this after many let downs, some right out of the blue.

The above post was meant to be posted at the end of March but I have not bean able to update the blog as I have bean very ill.
Will update soon.

Today I went back to the MS centre where I used to go to have my treatments in the Hyprobaric Chamber. I stopped going because it gave me terrible head aches and my body could not cope with the different pressure/temperature changes. Some sessions putting me in hospital as it affected my RSD badly. I was hoping to go back at a latter date as I think it was helping but at a cost, but was advised by my Doctor and Physio not to do so.

I met a few people I used to see when I was going regularly. There was a pilates session for the MS people so I stopped and joined in, it was different than the one I am used to as this one was more about balance than any thing else. Never the less it was enjoyable. When it was time to go home I waited for my bus, I paced up and down trying to keep warm as it was very cold. Typically I had just missed one. After half an hour the bus came. I was so cold I could not think straight. I did not get warm all night feeling quite ill at times the day had taken it out of me.I was in a lot of pain with all my joints hurting and my shoulders really tight. A few hours of enjoyment often leads to a few hours of non enjoyment. A lot of tablets later (too many) the pain began to ease but I still felt ice cold. My legs feel like there is sand running through them.

I went back to pilates most people asked how I was after my recent chest and eye infection. I found the class quite hard, some of the moves were new to me but on the whole I coped alright, it was nice to be part of the group again.

Physio Wietse did the usual needles. We talked about how I felt he said I should try to take it a bit easier as any exercise including pilates will exhaust me and my body will not cope. I don't think its coping very well now. My temperature changes have bean extreme again, if I go out in to the cold I shake like a jelly and the next moment am sweating buckets. It is so tiring just on its own with out everything else. Sleep is no better the tablets (NATRASLEEP) do not seam to work. My legs feel like they are on fire but ice cold at the same time. I think RSD must win the prize for the most stupid symptoms.

I got cards and a plant, Andrew is buying me a domain name( .com etc) for my blog. I had a relaxing day not doing too much.

Really bad night pains and burning in my legs, right one the worst, I woke with a bad head ache probably from less sleep than normal. Went on my scooter as I had made two Birthday cakes so went to deliver them. Got to a point on my route where the path just stopped then started again but very high. It was too high to get my scooter up without breaking it so I had to lift it up and over, on to the high kerb. I pulled my shoulder and wrist doing so, it is quite pain full. Still got bad head ache.

Pilates again I did a lot better tonight but my foot kept going into spasms so I had to keep stopping. My eye has bean quite sore and red it feels like there is something in it. Later on that night well, early morning my eye got worse and was very sore. I flushed it out with the drops I got for my eye infection, and out came a sequin! It had bean there for two days as it came off a heart shaped decoration that I got with some flowers, which I took to the crematorium to put in a planter for my Mum and Dad.

Today I went to watch the Lincoln 10km road race. The weather was ideal. I saw a lot of runners from the club taking part. How I wish I was as well. Quite a few runners were in fancy dress ranging from Spiderman to fairies, plus one man in a tea shirt and thong pants. He was getting plenty of cheers and loving every minute. They were a lot of people running, the biggest entry to date. I kept getting squashed and was worried I was going to get knocked over. I forgot to take my camera but I don't think I would have got any good pictures as it was so packed. After walking around for too long, the pain started in my foot and shoulder so I decided to have a sit down and have an ice cream. I also bought one for a homeless man, who was very pleased.
The day was a nice change from my usual one, so was enjoyable if not painful. First the good then the bad follows as usual with RSD. Later that night I had a lot of pain in the two biggest toes on my RSD foot very painful my heel is also sore

Today I feel very stiff, and my foot is swollen and the right heel is still very sore. After all yesterdays walking, I did not think I have got off too badly. My legs feel like I have actually bean running. I am very tired but that's to be expected.

Today I am getting the greenhouse sorted out for the seeds for the bedding plants. I had to put the benches together. I got most of it done so I was pleased.

Today is the day to take Sandy to the vets. He is pleased with her as she seams to have picked up a bit, She has tumors in her womb and in her mammary glands. At the moment she is happy enough. I am to keep an close eye on her and to go back if any thing changes. 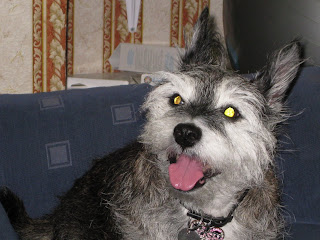 Hope you all are enjoying our Spring like weather.
Keep smiling.
Love Gill
No comments:

I can hardly believe its March already.

My body feels like it has bean in a car crash, everywhere hurts. I don't know if its the infection or the dreaded RSD that is flaring up.

I have decided to go back to the doctors as I am no better, now my eye is sore and red with what looks like little ulcers on the bottom lid and corners.
The doctors verdict is I have still have the chest infection, my eye is also infected. I have bean given more tablets for chest infection CLARITHROMYCIN they are a lot stronger and should clear it. My doctor said it is kill or cure, if they don't work he will shoot me. I think he was joking, however at times it seems like a good idea. Also antibiotic drops for my eye CHLORAMPHENICOL. He said I will feel a different person very soon. I told him about my pain and sensitivity he does not know much about RSD but thinks it has been upset. I said it certainly has. Back in a week if there's no improvement.

Physio-Wietse was not feeling his usual crazy self, he thinks I have given him the virus or what ever I have got. Usual needles plus an extra one in the middle of the top of my head. I told him about the extra pain and he agrees with my doctor. Brought him up to date with the new medication.

We had to take my little dog Sandy back to the vets after her finishing her antibiotics. A different vet examined her and was more concerned. She still has got an infection in her womb, so more antibiotics for her. I am quite worried about her. Next time we see the first vet so he might tell me a better verdict I do hope so. 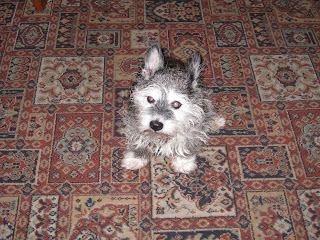 Tonight I decided to try NATRASLEEP a herbal sleep remedy I am desperate for a nights sleep so it can't do any harm, can it?!

Today is my grandson Jay-Jays Birthday, he is six. Andrew and I went round to give him the presents we have got for him, a transformer which required a degree in engineering to transform it, even for Andrew. Jay-Jay liked it a lot, and children are quick learners so hopefully he will be able to do it by himself very soon . Also he received a print and colour set from Paul (husband) and myself. Andrew got him two large posters for his bedroom walls of Spiderman and other comicbook superheroes. 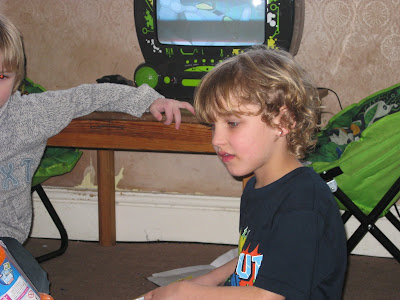 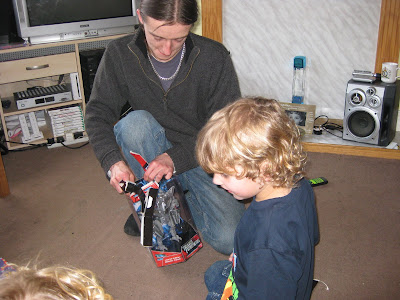 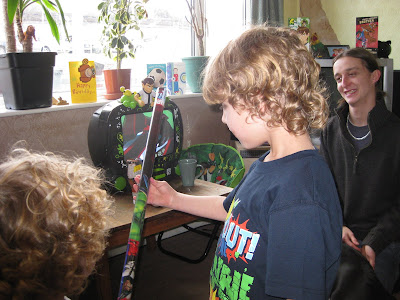 Jay-Jay in front of the BEN10 TV/DVD he received from his parents holding one of the posters.
The noise from young voices getting very excited( he had three friend there as well) was a bit much for me as I already had a head ache I stopped a while and said I would see him later. His party is tomorrow at Playzone; a kids indoor play park with ball pits and tunnels etc. 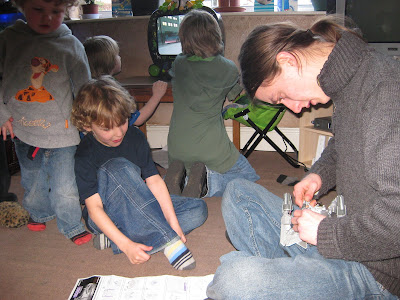 Still trying to sort it out. 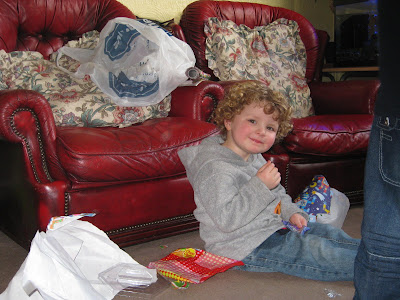 Later on that night as I was putting on my boot, my foot went into a severe spasm the worst one I have had for a while. The pain was horrendous.

Sandy is very down and sore where she was examined so not her usual self. She is eating alright though. I am beginning to feel a little better, but chest is still tight. My eyes are not so sore as they were.

Well that's all this time hope you are all feeling reasonable and not in too much pain.