A very cold frosty morning, white over on the common so everywhere frozen. Summer came back quite clean for a change.

Not a good night a lot of pain and spasms. I have taken more tablets but still the pain wins.

I rung up PIPS again and they said it should have been sorted my now and will be sent to the higher office. I should hear with in a few days. I said that's what the last person said. What I don't understand is why other people have been heard, and they put their claims in a long time after me. I think it's the RSD as they know nothing about it. Look it up-- before I got it, I had never heard of it either. Any way I can't do anymore so just wait. I will be surprised if I hear this year.

Went to Asda Living, to get a few Christmas presents with Paul. We did quite well too.

Lindsay kicked a chair as she walked past and has broke her little toe very painful. I broke mine years ago.

Paul is at the Nurse to check his back, everything OK.

Cleaned up down stairs. Not as much pain today and spasms are less, so that's good.

Age UK- this is the first time Jenny and I have worked together since November 15th.
There was a Craft Fair on so it was very busy with all the stall holders having food, or at least a drink.
At 2pm Polly said NO more meals, only cakes and Christmas bits that were on the counter.

Poor Tommy-Lee had an accident today, he got off the bus and was hit by a car. He was not badly hurt just shock, scrapes and bruised. He phoned Lindsay and she rushed down there getting a lift with a neighbour, as she still has a very swollen toe. He was in the back of an Ambulance for an hour. They checked him over and said he was alright to go home without going to Hospital. If he feels strange or any thing not right he is to go to A and E straight away. He was so lucky not to have bean badly hurt or worse. I think someone was watching over him.

Would have bean my Dad's Birthday today 98 years old.

Rung Lindsay up, she said Tommy-Lee was very sore and was a bit tearful last night, but he had gone out to his friends today. He said he will ring her if things are not right.

Lindsay came round for the day with Jamie-Lee. She was very quiet and watched some things on YouTube for quite a while.

Walked to the Crematorium to put some flowers on the memory headstone for Mum, Dad and Phillip my Brother. Also my past next door neighbours, Mr and Mrs Lambert. Very cold today and bitter wind. I was going on my bike, but too much wind. I have not been on it since May.

Christmas shopping with Paul in town. Got quite a lot more done. Had dinner in town so no cooking tonight. Not been back long when Angela called round. She also had been out for dinner.
Another windy, sunny day so all the washing dried makes a change so just the ironing to do tomorrow.

Went to Joy's later as its her Birthday tomorrow. Walked there and Paul picked me up later, nice to see her.

Lindsay said Tommy-Lee was a bit upset as his shoes had been damaged by the bus accident on Friday. I bought them for him, and they were expensive, as men's price Clarks shoes not boys.
I told Lindsay to tell him not to worry and we will sort it out. He is a very thoughtful boy and very caring.

Jenny came round after having her hair cut, looks very nice (a new place for her)

I am not at Age UK on Friday as the oldies party is on, the last of three. Last year I found it hard to cope with the noise and music being very loud and the speakers being set up wrong. A lot of vibration from them and just so many people in one place. So this year I told Polly I would not be there to help. She said she was not responsible for it, this years organising is by the staff, but as far as she knew they were plenty of helpers. Anyway Jenny will tell me how it all went after.

My haircut today, as usual it looks good.

Well what a night-- Andrew was attacked coming home early hours of the morning. Police came to the door around 4AM. When Paul and I got to A and E we were told that Andrew had a fractured skull, 2 fractured bones in his neck a bleed on the brain and a very large gash to his forehead. He had head blocks on and a collar. The police were there too. They said that this could be a murder enquiry. I dropped to the floor and started shaking. Paul and the people around thought I was going to have a seizure. An Ambulance lady sat with me outside. Andrew was very restless and would not believe he had been attacked. Paul showed him his head gash on his phone and he just about passed out.

As time went on and another scan showed it was not as bad as they thought. Still the same injuries but not as life threatening. The gash in his head was bleeding a lot when he moved, something he had been told not to do. He thought he was in prison and bean held down. His mind was all over the place. He calmed down after having pain relief and fluid plus something to calm him a bit. His clothes were taken for any evidence. His head was stitched up- this took ages around twenty minutes or more. While he was being treated, the news came on and he was mentioned. A man had been attacked and was receiving treatment at the Hospital. Stitches out in 7 days.

The hospital wanted to keep Andrew in, but he would have gone crazy. He came home with us with instructions for any signs to look for regarding his head injury. Andrew went to rest and we kept checking up on him. We just was so pleased the injuries were not as bad as first thought.

The police are following this up and will be in touch. There are witnesses, we could not have the names as the enquiry is still ongoing. At a later date if we can we all would like to thank them also the person who phoned the Ambulance.

Andrew has now got black eyes and does not feel as good as the 12th. A lot of pain in his head and neck- where the head fractures are he said it's very numb. I think if he had stayed in hospital he would still be there. We have kept a very close eye on him.

I am still quite shook up as well but slowly getting over it, a big shock, after all it's only bean a few days since Tommy-Lee was hit by a car.

In town today to get a few things not really in the mood though. Not feeling the Christmas Spirit,
far from it.

The common is like a mud bath, so we have stopped going on it even the clean bit is no longer.
We now play ball in the area just near the park. She still just gets mucky and wet, but a lot better than the common. She still enjoys it so we are both happy.

The police came to see Andrew and took a statement. He could not remember hardly anything. The police have got a lot of of coverage on camera and are putting it all together. Hopefully this will turn into something and someone will be prosecuted for it. Andrew is very up much up and down with a lot of pain and discomfort. His mood is up and down which is normal for head injuries. Me well-- just so pleased he is still here.

Marzipanned all the cakes, I know its a bit later than usual but the icing will get done over the next few days.

Jenny came round after having her hair highlighted looks very nice, better than her usual hairdresser.  Angela also came round both of them exchanged presents with me.

I hurt a lot today in most places. I think after the last few days I am more noticing the pain. Never mind it will settle hopefully or at least lessen a bit.

Went to Argos late as I put an item on reserve thinking it was three day holding and not two. I could have chanced it or reorder, but decided to fetch it today, I got very wet as it chucked it down. Any way at least I've got it now.

A lot of places are flooded again, not so much around here. Hopefully there will not be much more rain so the people can get on with their normal life.

Age UK not too busy but steady so that was good for me as my mind was still not focusing on things right. Paul is in with Andrew so he will be fine. Joy came in to see me and I gave her Christmas presents. She is not doing too bad.

Bit of shopping then home. Tired but Happy.

Andrew had out his stitches ten in all, lots more that dissolved underneath- He was brave.

Iced all the cakes so caught up again.
Pain wise today is not good- more pain when I am sat, than doing things. Getting a jacket or coat on is bad. Really gets to me at times, but there is very little I can do about it other than send myself in to ZOMBIE MODE with extra tablets is there?

Windy and dry, a good wash day. Washed Andrew's backpack after all the blood that was on it. All came off after two washes so I was pleased. I was not sure how well it would wash- so I said if the worst happens it will have to be a new one.

My friend John came to pick up his cake so that's them all gone apart from my friends who are still on Holiday. Plus ours of course hopefully they will be good but you never know. Over cooked, under cooked, or just right.

Baking mince pies and small sponge cakes plus a fruit loaf all turned out good= not tasted yet though.
Paul's cleaning up. He is going to pick Wayne up from the station later as he is here over Christmas.
Kayleigh is here on Friday. Later we all had the usual Christmas Eve Chinese tea very nice too.

Happy Christmas to you all. Hope you have a good day. We did, quite noisy at times and the turkey took longer to cook, but all OK in the end. A long day but good. Summer was excited but so tired all day. 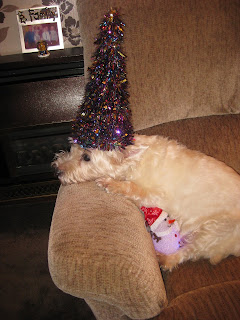 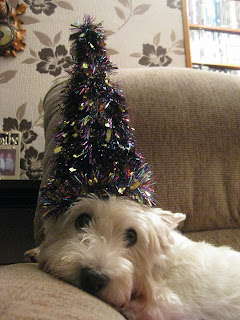 A merry Christmas from me PUP (Summer).

Well another year nearly over what will next year bring, better worse whatever it is we will all just have to except it. Hope all's good with you all and you are getting some good days.
Next Blog will be January 2020 so see you there. All the best Gill.