My foot and right side (RSD side) continues to be much the same, foot burning but feels ice cold, shoulder burning and tingling. My neck is very stiff, hardly able to turn my head. Most days I am very tired, as still not getting much sleep.

Physio much the same as normal, Wietse has bean massaging my right hip, it really does hurt for a few days, then is a bit better for a while. After coming home after physio I was in a lot of pain so took some ORANORM, an hour or so later I was very sick and continued being sick a few times. Whether it was the pain that did this, or the ORANORM - I not too sure.

The sickness lasted only the day, but it certainly did not help the pain, I was all ready in.

After a few days of very light diet I felt a lot better.

Why is my life so full of 80% PAIN 20% LIFE. I feel there has to more than a life of tablets which I take some day almost to overdose levels, having very bad spasms, doc has doubled ZANAFLEX to 4mg 3 times a day. See if this helps, the cold weather does not help.
Have stopped CLOINDINE day time as making me very cold and dizzy I take just one at night, it really does help with the sweating and temperature changes of my body.

Wietse manipulated my foot and hip today. It really hurt like hell. After he finished I felt really dizzy, I sat down for a while then went home. Later on Paul thinks I passed out in the chair.


Muscles very stiff, lots of BIOFREZZE and extra extra tablets for the pain.

Back to doc, mine is away, so saw another one, knew nothing about RSD but said I should probably go on steroids, gave me 2mg of DIAZAPAN to be taken 3 times a day..


Physio I asked Wietse if pain and spasms could be related to the MORPHINE withdrawal, he said it was possible, or could be a virus, or just the cold making me feel worse. All he did today was very gently massage my foot as in a lot of pain no needles or hip massage to day.

Very sick again, woken in the night with real bad spasms in right shoulder and arm feel really spaced out like I am not really here, could be the DIAZAPAN. Keep having more and more of these like passing out things or blackouts ( have not mention them too much as thought they were from lack of sleep) but I do not remember them, also people say I am slurring my speech.
Bad headache and generally all over body ache.


29TH
My friend Russ says I look at bit worse than usual today kept falling asleep or blacking out. I had dinner and watched Russ play on the WII. I have a new game Mario kart, I was half standing half leaning against the dining room table, talking to him, mid sentence I fell forwards, crashing into the fire, knocking my self unconscious.


Russ tried to bring me round but could not so phoned for an ambulance. Paramedics came first then an ambulance. I was under the fire (fire mounted on the wall) they had to roll me very carefully as they did not know if I had broken anything with having OSTIOPEROSIS, I had a very bad head, and was unconscious a lot of the time .

I was put on a spinal board with a collar and head block and strapped to the board, I kept saying I did not want to go to hospital as it was a nasty place, the ambulance man said it was nice, I said it was not I had bean before but I was taken anyway. Andrew my son went with me. I was given gas and air for the pain it helped a bit. I settled a bit, then started hallucinating about being chased, thrashing around as much as I could. When I came round all I could see was a face (a paramedic), I put my hand up to feel him to see if he was real he was very smooth (alapecia).

On arrival at the hospital I was given lots of xrays and kept blacking out, in lots of pain, I stopped there for a while. Then after a long discussion they let me come home, nothing broken but very sore and bruised on left hip, left arm and right foot, head hurts so does face, and to see my doc as soon as possible to have blood tests. Bruises on my face and cut on head were not visible at that time but came out a few days after. 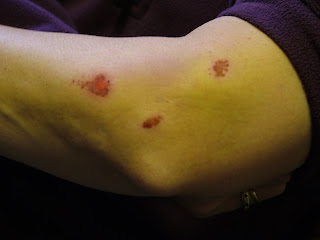 For a few weeks leading up to the events of the 29TH Gill had been having lapses in consciousness on a daily basis. One minute you would be having a conversation and then she would literally drop off. On awaking there was no recollection from Gill of even falling asleep. From a friends point of view this was not something I had seen before in Gill and knew that the RSD was taking its toll more than ever before. When Gill finally fell to the floor I stood back and part of me felt that there was a positive to what had just happened. To watch a friend fight to the point of her body saying enough is enough is hard. At least now i thought they would point Gill in the right direction. Now Gill is off to QMC Nottingham to see a neurologist which is the right thing for her as the RSD is about links and messages to the brain regarding pain. Hopefully this is the opening to at least lessen the pain to let Gill get back some independence that we all take for granted.

Saw a different doc as mine still away organised blood tests.

Early AM
I was still awake when a firework went off out side bedroom window my body jumped up from the bed and went into a massive spasm. I was in so much pain, I nearly took morphine. I took H CODEINE and ZANAFLEX the spasm settled down a bit.

Had blood tests see doc next week. Able to move had to go back to using wheelchair again, pain well off the scale. The next day I spent in bed as was in too much pain to move.

Woke with bruises on face around eye on left side and across forehead, it really hurt eye swollen up, partly closed. Still in a lot of pain. 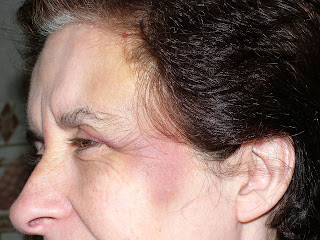 Woke up early morning and could not move my body, only head, but I could talk, this lasted a long time maybe over half a hour. I woke Paul took some H CODEINE, finally went to sleep when I woke later that day, I had all my full body feeling back again.

Saw doc, one I have seen lots of times before, he was quite concerned, and did various tests. Blood tests have come back, they showed I am short of vitamin B12, used for osteoporosis and immune system, cholesterol border line as it has bean for years others just OK.

He is sending me for an ECG (heart analysis) and to see a neurologist on December 15TH for tests. He has stopped DIAZEPAM (was only short term and he does not like me being on it) and CLONIDINE(probably making blood pressure too low so could be some thing to do with blackouts). 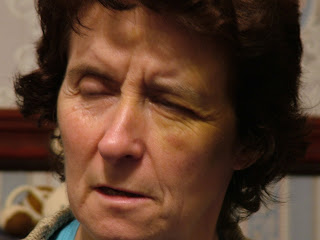 More bruising has come out.

Wietse saw the amount of damage I had done when I fell. He said I should wear knee and elbow pads and crash helmet like roller bladders do, I said can I do some, he said NO. Put in needles and gently massaged my foot.

Talked about what doc had said.

Still having a few blackout things, bruising gone down a lot, able to move about a lot better now, not using wheelchair now.

Having quite a lot of sweating, mostly at night, going to see doc tonight. Most of bruising has now gone. The cuts and grazes all so are going, but they still hurt, especially my foot and hip.

I feel a lot better now, took Sandy for a walk, for the first time, since fall. Paul came too, it felt really good. I have how seen doc he has put me back on BROBATHINE 1 just at night time I will see if this helps.

Had physio today, Wietse worked on my neck, the pain was probably some of the worst I have experienced with Wietse. I felt really sick, he said the pain would settle down and then I would feel a lot better. I hope so. He all so worked on my foot more gently as it was still sore and bruised from my fall. Lots of extra pain killers later on in the day.

My neck feels very stiff, still hurts but not as much, rest of body average pain. PROBATHINE is sort of helping with night time sweats, but not as it well as before. Now all I need to do is have a full nights sleep.

I have got my ECG heart test on Monday, but I am not expecting it too show really anything wrong with it.


Well bye hope you are all good and well, love Gill.
No comments: