Today I am at a different Pilate's group run by the same teacher as I lost my place at the other one as was ill for so long. This one is a mixed ability group like I was in before and I enjoyed it a lot. I had forgotten how to a few moves do but with Joannes guidance I was soon doing them right, it was nice to be back to some normality again if that's possible.

Physio - The usual needles, Wietse felt my neck and shoulders and said they felt looser than as they have bean. I agreed that they have bean a lot better. He felt my knee which has not bean too good he said there is some deep muscle damage behind the knee. When he pressed it it really hurt he went on to give it a good massage which was very pain full. He said that should improve things I said I do hope so as it has bean bad.
On the way home it felt worse and kept throbbing but Wietse usually makes it better so I had good faith in him.

Today we are going to look at some Westie pups. We have decided to get another dog as the house seems empty with out little Sandy; a decision I am still not sure is right but I feel so lost. A hard day with lots of tears. When I looked into the mothers eyes, she just gave me a look just like Sandy used to.
The pups are lovely so cute. We have decided to get a puppy a little girl, which will be ready at the end of the month. 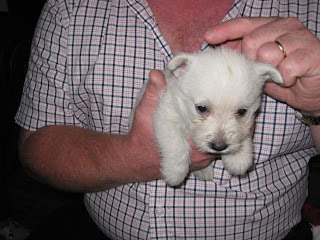 Our choice of puppy 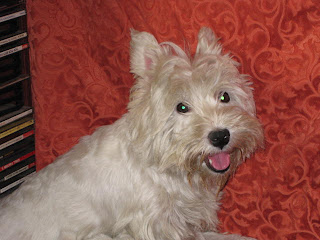 I am having a LOT of pain today knees wrists. The pain is worst when I am sat if I keep moving it hurts less. I gave in and took a lot of OROMORPH it took the edge off, but still bothered me a lot.

Pilates again I did a lot better this time even managing one called windmills, where your arms and legs go in opposite directions. It is hard to do when my body is not in sync with its self. I was pleased with myself for the first time in ages I feel I am getting some where. Where that is nobody knows.

My grandsons fourth Birthday Tommy-Lee. Paul, Andrew and I went to take his presents we got him a Ben Ten quilt, blanket/fleece, Peppa Pig sticker book and DVDs and some sweets. We also got Jay-Jay his older brother a blanket/fleece so they did not fall out over it. They both loved them.

Physio again. This time my neck and shoulders are very tight and painful I have bean getting head aches this is where he thinks they are coming from. He looked again at my knee again which is not any better. He suggests I go to see my Doctor which hopefully I will do tomorrow.
I do not feel right today more tired than usual and hot and cold may be I have got a bug or some thing .

A rough night with pain, a lot of pain relief taken, too much. Went to see Doctor he thinks my knee is RSD spreading again. I think I already knew this but was hoping it was something else not RSD related. He has given me cream to help with the pain DIFFLAM. This was not a good day. Another set back but I can overcome it. I still feel not right my doctor thinks it might be sleep deprevation and exhaustion it is not helped by all the extra pain relief I have taken just to get thought the day. There are also a lot of bugs going round as well. I could have picked up one of them. I went home to bed as I felt so bad I did manage to sleep a bit as well. spent the rest of the day there.

I now feel a lot better if not a bit week. I feel very down I can not seem to shake the feeling off.
Pilates again I am really getting good at this, I've managed most of the moves but my knee was very sore.

Physio - talked with Wietse about my knee he was thinking the same as the doctor, but not to take it too hard as with all the rest of my RSD it flares up and goes down again and it will do its own thing, good and bad days.

Wayne is here for the weekend to give Tommy-Lee his Birthday present from Florida a tea shirt with his name on it wishing him happy birthday. He loved it as not to be left out he got Jay-Jay his brother a towel. A Micky mouse figure for both of them. Its nice to see Wayne again.

I watched the great North run the best bits and cried all the way through it. I have run it twice so I was running with them. Maybe one day it might happen. This time last year I was not running at all now I can manage a very short one of half an hour on a good day so all is not lost yet.

In town today I slipped off a kerb and started my foot hurting a lot. Later on that day I dropped my Jelly Baby mug that Andrew got me as a present and it broke. I cried. I loved that mug. My hand just gave way. Not a good day.

My hand is swollen and bruised I think I may have sprained it as it hurts a lot. I some times wonder how much pain I would be in if I did not take all the pain killers I do, its a thought that bothers me. Today I got Paul a reclining chair for his birthday on Sunday. An electric one its very nice I hope he likes it.

Pilate's went well. Another good run with Pete a very warm one my knee was painful to start with then settled down a bit a good day.


No physio Wietse is ill, get better soon. I cleaned up down stairs and was very tired so in the afternoon had a lay down in my chair (recliner). I felt much better after wards. My hand is not as sore now and I am able to move it more. 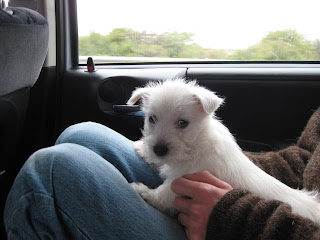 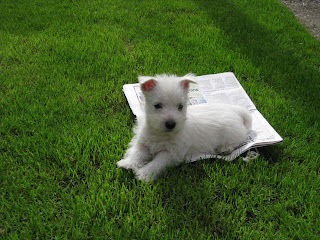 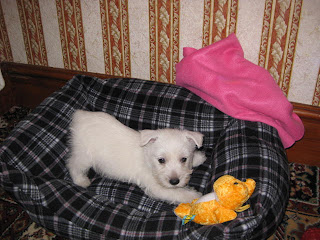 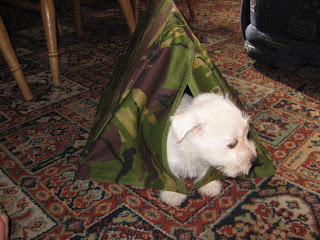 "Action-Pup"
In the Action man tent I made for Jay-Jay and Tommy-Lee.


We picked up are little pup. We are calling her Summer, her pedigree name is Helmictican Summer Snow. She is very cute and has grown a little bit since last time we saw her.
The ride home was good, she is very at home in the car. She sat on Andrews knee and kept giving him kisses. When we got her home she ate her food and seemed very settled. The night was also good. I feel a bit better about her now she is here. I think she will help me a lot. I can not replace Sandy or the love I had for her but I think I have more love to give to this little one

I fell down the stairs and hurt my elbows, wrist again and back. I just lost my balance I think, it shook me up a lot but it could have bean worse. Paul's Birthday He had already got his chair which he loves I made him a cake plus he got other presents from the family a good day.

I ache a lot with the fall and I am bruised and grazed on my elbows and back. Summer is a little live wire, gaining more confidence every day. She is eating and sleeping well.

Pilates went well. I am having a lot of spasms all over my body and my muscles are tight. I have had a head ache for a few days may be its lack of physio. My temperature is all over the place, hot and sweating, then changing to ice cold. This did improve but has started again. A lot of joint pain late at night not able to get free of pain.

Dentist I was suppose to have a filling but the dentist took an x-ray and said the tooth was not as bad as she thought so I got a way without one its a bit inflamed. I have bean using sensodyne tooth paste I sure it has helped. I dropped my other Jelly Baby mug the one my daughter got me the same as be for it just dropped out my hand.

My run with Pete went well I got round the route with out stopping again about half an hour may be less this . I was pleased with the way I ran. I will fight this RSD with all I have got even though it has more than likely spread.


Well that's about all for now its bean a mixed month. The best was getting Summer.
Hope you are all as well as you can be and fighting the dreaded RSD.
Good luck and best wishes Gill.
No comments: