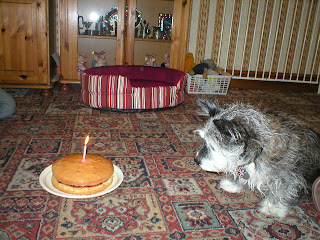 MARCH 28TH
My little dog is 15 years old today, she is still very active and alert, she has cataracts on both eyes but still sees most things also she is a bit deaf. For her birthday she got a new basket. Sandy loves it when Tommy lee and Jay-Jay come round she joins in the playing especially football - which she is still very good at. When they have gone she falls into a deep sleep. 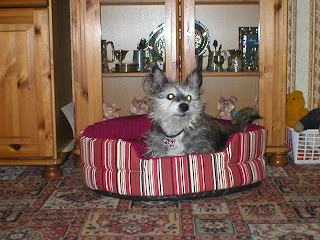 Went to watch Lincoln 10KM race there were more people taking part this year than any other it was a bright spring day. I only wish I was running a long side them all.

Blood test today to check things are doing as they should.
I dropped my ramp on my bad foot the pain was terrible then later on I ran over my good foot with my scooter more pain even my bad foot joined in. Not a good day.

Physio today Wietse put needles in ears and neck (electric for neck ). He did not do anything to my foot. My stomach is swollen and painful, it might be the iron tablets, or IBS who knows, not me.

The RSD pain has settled a bit at the moment, could be the warmer weather or the RSD just felt like it. The spasm's seem to be a bit worse more in my right shoulder, which is very stiff. My legs and of course my foot are tight and painful. Body temperature changes have bean all over the place one minute hot sweating full body the next shaking with the cold.

Physio again Wietse did usual needles also asked him to massage my neck and shoulders. The pain was so bad he had to keep stopping, he did the massage in 3 stages my foot started hurting as well as not to be left out. I have noticed that pain else where in my body and the foot usually joins in.

My shoulder and neck feel like I have bean beaten up.
I got bitten on my hand by a dog it was not his fault as I reached out to him after looking at the Lady's baby, he was only protecting her, and I should not have put my hand near him. The bites were very deep 3 in total 1 of them really deep Paul said I should go to the hospital but I did not.
My hand did not stop bleeding for about 10 hours it slowed down then started again.

My hand is swollen and very sore. rest of me not too bad pain is under control, temperature and spasm's are not.

Physio again, Wietse did usual acue, he asked me about my hand and said it looked infected. he went on to bathe it a lot of pus and black bits came out then he poured salt( he assaulted me) on it to draw any infection out it hurt lots, stinging like mad, he advised me to go to the doctors which I did doctor said it was very infected and put on antibiotics.

Hand has gone down a bit. A lot of green stuff came out. I feel far away or dreaming most of the time I wish I was.

In town today to get Tommy Lee and Jay-Jay some new shoes. I was very tired and in some pain more tablets and rest after which I was feeling a lot better.

Paul and I went to Skegness for the day it was very warm but I walked more than I should have so more pain and lots of spasm's in foot and legs.

Physio again usual stuff I asked Wietse if I can ride my bike which I have not ridden since October of last year due to blackouts and spasms he said not yet wait till it gets a bit warmer and I get stronger. Something to look foreward to. Went to doctors hand still infected he put me on more antibiotic's. I am to keep on morphine as he thinks it is helping with pain. I am to keep on iron as blood tests are back, iron has gone up a bit but not enough yet, also my vitamin B12 has risen slightly. Every thing else is all right.

I did some gardening not too much but I still ached, sweating and body temperature still remains the same. Getting feelings like electric shocks in my shoulder.
27TH
Not good for the sweating but good for the pain, the last week pain levels have bean down, about 3-4 on the mcgill pain scale (normally 6+). Wietse and I both think it has something to do with the weather being warmer and the extra morphine, but its still good I hope it keeps up.
29TH
Physio again, Wietse put needles in ears and neck, the neck ones hurt a lot, he wired me up for the electrics. He set it going it hurt a lot also. When he left the room my phone rang as I answered it I pulled the neddles and electrics out . When they come out they send little shocks on your skin it really hurts. When Wietse came back he put the needles back in and set the electrics going again. A bit later a sharp pain in my foot made me move again and the needles shot out yet again, because it was nearly time he stopped it there. He took out the rest of the needles. No massage of the foot today.
30TH
As I was putting my boot on a severe pain shot though my foot it made me drop to the floor the pain was horrendous it did not last long thank goodness. I think because my pain levels have dropped I have not bean quite so careful with my foot and I think it was a sharp reminder from the RSD as if to say I am still here.
1ST MAY

I had a instant fall asleep today, I was sat reading on the floor of the bedroom when I just fell asleep falling back wards hitting my head on the door frame or the floor I am not sure if it knocked me out but it caused a large lump on the side of my head . I know I was tired but that has not happen for a while. My hand is still infected green stuff still using out.

3RD
I did some green house work today pricking out my bedding plants . Today is colder than it has bean for a while but still a nice if not a fresh day. My foot went into a real strop when walking Sandy it just went into a full 10 pain level it stopped me in my tracks for a while till the pain went about 10 minutes there were no more pain on that level for the rest of the day thank goodness.


RSD is like a roller coaster ride its terrifying and you cannot get off until it has finished, with RSD
probably never. Well thats about it for now hope the RSD has bean kind to you.
love Gill.
1 comment: