Took Summer for a walk today. Called for Emmie, my neighbour's daughter who loves Summer, but no answer. So just me and Summer on our walk today. Going to be another warm day I think. It was lovely on the common, a bit of cloud cover so perfect for Summer.

A lot of pain later. All over pain. The sort that stops you from relaxing or watching TV. Took tablets but they did not do too much. Finally bed but disturbed sleep with pain. Going to bed then getting up around three hours later is not recommended at all.

Emmie came on the common today and enjoyed it a lot. She was frightened of dogs, well still is of most, but not Summer.

I feel very tired today, I think the lack of less than usual sleep has caught up. At least the pain has gone a bit now.

Walk with Emmie again, last time for now as she is back at school next week and a sleepover tonight. I have enjoyed our time together. Then she came back here for a while as her Dad was at the Dentist, and we played with the Barbie dolls. I gave her one doll to keep as my granddaughter, Jamie Lee, had a lot of dolls that were given to her.

Sorting out the bottom shed as getting rid of toys that Jamie-Lee can no longer use as she is too big.

Gave the toys to a friend. All that is left now is a small trampoline and two scooters (if you want a trampoline let me know). The shed looks empty now.  A lot better for getting the other things out.

Jamie-Lee has hurt her foot and Lindsay took her to A and E. Had an X-ray but nothing was broken just bruised. She is hobbling and in a bit of pain, but it will be better in a few days.

Woke to a bad headache.

Cleared later and I felt better. A trip out to the skip/tip and took all the things that were no good(decided Paul could stay). I know it was the skip but still an outing for me.

After a good day, guess what PAIN later in fingers and most of the body. Nerve pain the worse type for RSD suffers.

Woke early as pain everywhere. On the common before 9AM nice so cool for Summer. As I did not know how Jamie-Lee's foot would be, and if she would be able to come with us. Not too bad as she is walking on it with no shoes on. She is here today as Jay-Jay is having a check-up on his arm that he damaged last year (put it through a glass door).  Jamie-Lee was very good today and a pleasure to have. Lindsay was back around 3 with Suey her dog, so Summer was very happy.  Lindsay and Jamie-Lee stayed for tea, then went home around 10. Jamie-Lee had bean here over thirteen hours. I was pleased she was good and not grumpy.

In town today to get some new Pyjamers I think the ones I got might be a bit small. So going to change for the next size. Got two T-shirts as well one fits well the other feels wrong on the shoulders. With having the RSD things need to be looser than they used to be or it can cause pain. The same with bras that is when I wear one. By the end of the day, they can be so uncomfortable.

Back to change Pyjamers before they all go. Took back T-shirt as well. A lot of washing done before I went, bedding as well, a good drying day.

Cleaning up downstairs later did all the ironing. A bit warm for that, but got it all done in stages after a bit of sitting down.

Paul is cleaning the new car. Watered the greenhouse ready for the horse muck spread tomorrow hopefully. Very warm in there 35C.  A bit smelly as well as the bag of muck in there.

My friend John came for tea and we all had a lovely Chinese, which we all enjoyed.

Another very warm day forecasted. I put horse muck in the greenhouse and coved it all with soil after watering it. There was steam coming off it. Shut the door and went back later to cover it with soil. Shut the door again for it to sweat, I think it will as the temperature is 38C in there. The smell is pretty bad but I quite like it.

Cleaning up, upstairs today, and sorting out under the spare bed. Paul is cleaning all the downstairs carpets and my reclining chair. Very humid and warm wind today so the carpets are drying well. Greenhouse temperature is high 38C so nicely sweating in there. Hopefully a load of good tomatoes and cucumbers later in the year.

Vacuumed all the carpets and put things back in the rooms. They all look clean now.

A lot of pain later all over, the sort that does not give up.

Finishing off the Tigger. This one I am giving to Kayleigh, Wayne's girlfriend. Had a few problems but I am pleased with the result. I would not make another one. The instructions are not very clear on how to put it together. Disney are better at films and cartoons than knitting patterns I think. Wayne is coming on Sunday, on his own, which is a shame. Hopefully next time they will both come together. I have not seen Wayne and Kayleigh since 2019 Christmas, then I was ill so did not see much of them.

I am making a Pikachu for Kayleigh's nephew and giving her niece a little doll's crib set complete with a teddy.

Paul's gone to pick up Wayne from Halifax,  So will see him today, which is good. Wayne had his Christmas presents as well. Cooked dinner; a scaled-down Christmas one with turkey. It was very nice but later I had stomach pain, probably all the veg. Not bean too good all week though. IBS can be good or, as it was this week bad.

A nice day with Wayne. I know Andrew enjoyed his time with him. He got early Birthday presents from Wayne and Lindsay, his Birthday tomorrow. Fathers day today, so Paul got gifts as well. Lindsay brought me tulips and chocolate. I asked her why and she said I was the only one not getting anything. A very nice gesture I will enjoy them both. 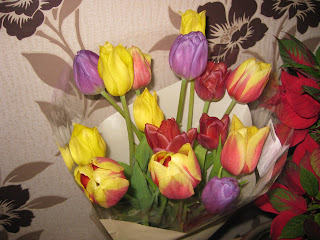 Tulips Lindsay bought me, this picture was taken a few days later so a bit faded now but still very nice.

Happy Birthday, Andrew hope you have a good day. More presents from Paul and me. Wayne is staying another day, not going back as planned. One more day to enjoy, We are having an Indian for tea hope my stomach will take it, not bean too bad today so far.

Finished off Pikachu so Wayne will be able to take him back with the little crib set. Also, Kayleigh's Christmas presents. 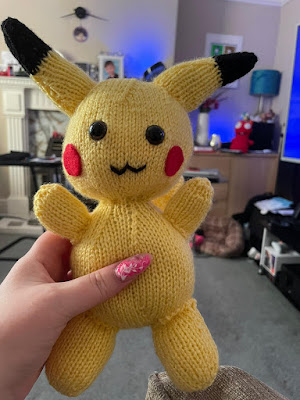 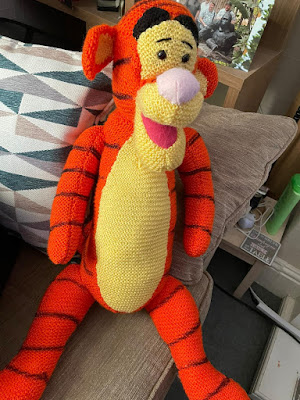 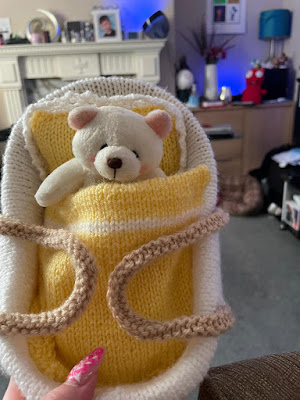 Wayne home today good to see him at last. Paul taking him back to Halifax and to his cat Timmy who has missed him a lot. Had my B12 injection in the afternoon did not hurt too much this time. Kayleigh rang up later to thank us for the presents and the gifts for her nephew and niece.

Meeting Joy in town bean over a year since I properly saw her so I am looking forward to seeing her. A nice hour with her, lots to catch up on. So good to hug her. Had a bra fit at Marks and Spencer's and got some new ones. When my hands are bad I do not wear one as it's hard to put on, but my others are falling apart and not very comfortable at all, hope these will be. Picked up my glasses as well two pairs, reading and long-distance ones. Stomach still not the best runs and pain.

Put the tomatoes and cucumbers in the greenhouse now they need to grow. Looking good though. I think as long as it stays warm they will catch up. Might be still picking tomatoes at Christmas but so what. This happened one year a bit back. I know early frost will finish everything off, so stay away frost. I made a frame from some plastic wire that I was given and it's perfect. Last year I had netting but the holes were a bit small so the flowers got trapped and some fell off so fewer cucumbers. This should be better I think. 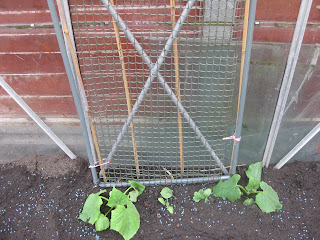 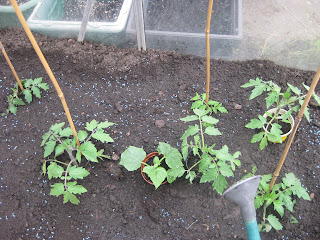 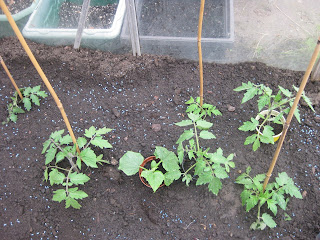 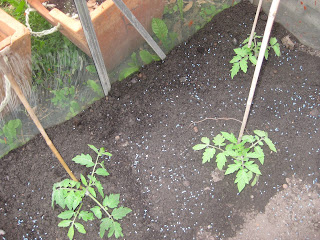 Hopefully, they will grow fast now, the horse muck should help a lot. A few years ago it did and I had a bumper crop. In a few week's time, I will take another picture then we can compare them.

While doing this blog I am watching and listening to Glastonbury, not performing live, but the past few year's performances. Very good too. Amy Winehouse is on now, such a good performer she was. Some I had to fast forward as flashes and strobe.  My stomach still not good, got runs and bloated, is it IBS or ???

Cleaning up today. Later went with Angela to the hospital as she needed moral support. We left home at six did not get back till nearly nine o'clock. I know they starve a bad stomach, But I was very hungry as only had a piece of toast all day. The last meal was tea last night around seven. Maybe it will help but I have not bean eating much anyway.

Bad pain later mostly legs my knees were terrible pain. I put on BIOFREEZE to numb them, not bad as it does a good job. Not for long though the pain comes back this time everywhere.

Painting the patio table and chairs going well. Summer was outside too watching everything I do as usual keeping guard.

Second coat for the table and chairs, they look a lot better now. Almost new looking again. Should last a bit longer now and all for the cost of a tin of paint. 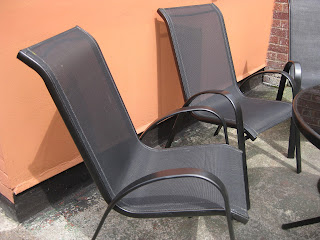 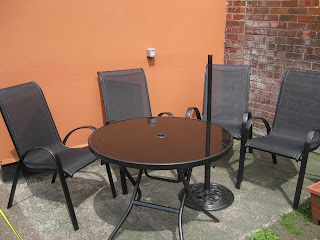 Got Jamie-Lee after school, while Lindsay is helping someone clear a few things. She had not bean here long when Emmie came round to play with Summer. The two of them played outside for a while then colouring and hangman. Saw Emmie home then Jamie-Lee was on her iPad till Lindsay picked her up.

Well, again another mixed month for me. Things are getting back to normal, and soon Borris will tell us what next. Hope everybody is well and things are good for you all.

All the best love Gill. 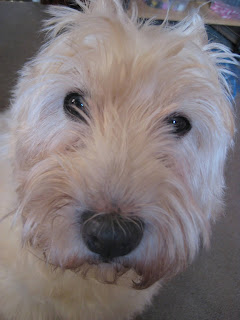