Today I feel quite good , I set to work and cleaned downstairs. Even at the end of the day although very tired pain levels were good.

2nd
After yesterday good day I have decided to make the most of this better time I am having, as I never know how long it will last, and clean up stairs. The snow is still very deep Summer is having a good time in the snow. As we have bean having severe frosts, a lot of the paths are bad to walk on. Wietse is quite worried that I will fall, he is not the only one - so am I. With having osteoporosis there is a very strong chance I will break a bone. He said I would shatter like a china doll

5th
Managed ten minutes biking and five minutes standing on strider. This is definitely easier than when I first began. I shall do this till it is safe to run again so my legs keep flexible for running again soon I hope. Pain levels still good.

6th
A very rough night with pain even after taking 800MG of IBRUES the pain still persisted I did not really want to take MORPHINE as I have gone a few weeks with out it.
Another very cold day, -14C, over night, but it was very sunny during the day. Today I made another Christmas cake which will give as little presents, when cut into four pieces iced, and decorated. More tired than the last few days probably because of pain.

8th
Helped Lindsay my daughter out, cleaning the old house up. At last she is able to move. The weather has held her up so have the builders with so many things going wrong but at last she and the house are ready. Tommy Lee had come home from nursery which he has now gone back to after having time off with his broken arm. We shared some sausage and chips.
After the cleaning was done it was time to go home. Next time I see them they should be in there new house.The walk home seemed a long way as I was very tired, when I am doing well with the pain I want to get on with things and a lot of the time do too much.

9/10th
A very bad night with a lot of pain and burning in my legs,very sensitive a lot of spasms as well. not much rest at all. Tonight I will put the leg guard back on that might help. Physio I missed the bus because it broke down down and the ten o'clock one became the eleven o'clock one but it came early and I missed it,(it can be late a lot in the winter) as the buses only go every hour to Physio I had to get a taxi and was late, Wietse did not mind and I still got my treatment the usual needles plus this time some gentle stretching of my foot as it is very tight probably after walking in the snow, and the usual talk. After I went into town and did some shopping.

12th
Today its the Santa run. A local 3KM run where every one dress up as Santa and runs round. A good glug of MORPHINE/ ORAMORPH before we left so I would not be in too much pain. So I was running on MORPHINE. Lindsay and the boys entered on the day so they are very excited. They look so cute in there little suits. 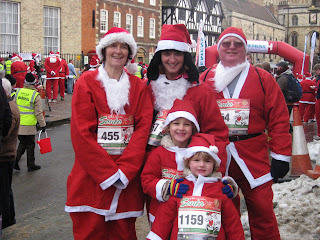 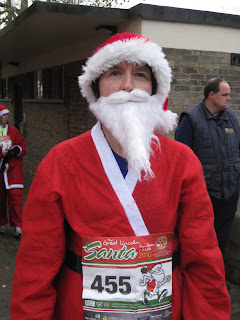 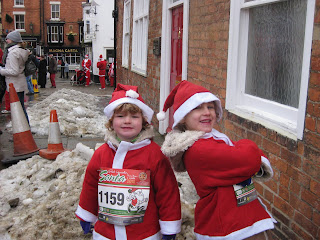 Paul entered the same time I did, he was going to walk round with Lindsay and the boys, I am running it, its about the same distance Pete and I have bean covering so I don't think I will have any trouble I hope not I have bean looking forward to this for a long time. The run went very well no trouble at all. I lapped the others and Tommy Lee shouted, go on win it. He was convinced that I could win the race. I knocked nearly five minutes off last years time finishing in 22.48 minutes. I received my medal very well earned. I did not win it. I was so pleased, all the work with Pete has certainly bean worth it. Thank you Pete.

13th
During the night I had quite a bad nose bleed it has not bean right since my stay in hospital earlier in the year. My head hurts a bit but on the whole I feel quite good. My foot is not as sensitive with the leg guard on, but pain much the same.

15th
Pilates today. A good session. My hips were quite stiff the moves helped. After a bit of lunch then home. I am quite tired but a good feeling after the run. People who do not run or have a sport will not understand how it can be missed, as at one time there was little hope of running gain.

17th
Physio - Usual needles. I made them Wietse and Michelle a cake each. Rolfe, trainee Physio was there. Also I took mince pies to share. Rolfe had not had them be for, he said they were good. Wietse said I can come next week as usual, then hopefully it will help me over the Christmas break. I have bean having a better time with pain but a lot of spasms during the night. Russ and his Mum was at my house when I got back so that was nice. We exchanged presents and cards. I caught up with what he had bean up to. He now lives in so I do not see as much of him like I did be for. A nice afternoon.

18th
In town with Paul to get a few Christmas gifts. Paul hurt his back a few days ago I told him to move as much as he could so he did not get stiff, but he did not, so now his back is very tight and stiff. Lindsay and the boys came round, we made cakes they really enjoyed it. I made a spiced tea cake as well so a busy afternoon. Very tired later on.

19th
Club common run, a run the club puts on every year on the local common usually a toy or selection box to enter. The proceeds are given to a local charity for helping poor and less fortunate people than us. I went to watch as as yet I can not run on uneven ground. (AS YET!) The weather was very cold. I met a few runners I had not seen for a while so that was nice. After there were mince pies and hot drinks. The prizes were given out for the winners of the races.
Later in the day I went to get Paul's tablets from the chemist in town. He had the Doctor earlier and was given some tablets for the pain. With the run in the morning as well I was worn out and had a bad headache. Later on I lost a large filling from a tooth.Lucky it does not hurt I will ring the dentist tomorrow. The night did not get any better bad pain in my legs ultra sensitive I took MORPHINE be for I went to bed may be a bit too much as I itched a lot and had a very dry mouth. The MORPHINE did not help at all. I spent a long night mostly listening to my Ipod
20th
Up at 8.30, after no real sleep. I have quite a few things to do. Paul is off work. I rung the dentist as I have no pain in my tooth I can leave it till after Christmas to see them, if it get worse I can ring a emergency number and they will help.

Cleaned up down stairs. Later on Paul, Andrew and I all went shopping to Morrison's for the Christmas food shopping. Later I had a severe RAYNARD'S attack on my hands which lasted for over two hours, very pain full. White fingers very dead and later turning blue, finally red, then normal. I think its because we spent a long time around the freezer and chiller sections. My temperature is not the best even on a good day. A painful day all round. Although extremely tired, sleep would not come for more than a few minutes at a time.

24th
Physio - last one this year usual needles. Went into town to get the last few bits of shopping. When I got back, about 3.30 my friend Tracy was there. I had not had any dinner preferring to finish my shopping.When I arrived home was quite hungry. There were nuts on the table so I had just a few, even saying to that they can upset my IBS. She said you only have had a few so it should be alright.
Later on Wayne and Will arrived for Christmas. We had a Chinese for tea/supper. After tea I did the veg for tomorrows dinner and Will helped me make mince pies. I also cooked the gammon. Every one went to bed I had a bath and went about 4.30.

25th
During the night I had violent stomach pains and spasms. When I got up I was vary sick, with chronic diarrhoea. I did not really eat much dinner. Slept a bit in the after noon The pain did not go away at all. I regret eating the nuts, but the few I had certainly caused me a lot of pain.

27th
I feel a bit better than I did but not eating much, when I do I get a lot of pain. My head hurts, probably dehydration. Temperature is all over the place. My legs are burning and jumping. I can not rest. Still got the sick feeling and feel very weak.

29th
Walked down to get Paul's tablets for his back. I feel tired and still weak, a lot of pain in my joints and bad spasms. I have taken ORAMORPH for the pain - very tired and weak.

Today I am in town to look at the sales. I don't feel right yet but need to get out for a while as I feel caged in after a time inside the house. I bought some nighties, a pair of cords and a shirt. In pain when I got back took more ORAMORPH for the pain.
Later on my eyes were weird and people looked like they were far away. I felt very dizzy, slightly sick not too sure if its the OROMORPH or low blood sugar.

HAPPY NEW YEAR TO EVERY ONE.
Well another year here what will this one bring?
I hope you all have a good as year as you can and have less pain full days. I will be more than pleased if I can keep up the running and also have less pain.
Bye for now love Gill
No comments: