I received an email from Wietse . He is doing well and his cats are settling in Holland (The Netherlands).
I really miss his conversations and his advice.


Summer had a bath today, turned out she was white under all that muck. 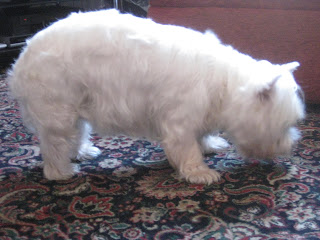 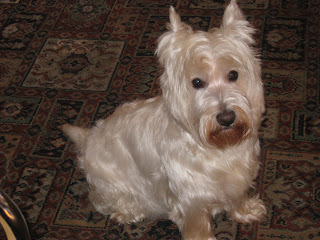 
She gets very mucky a lot more than other white dogs. She likes to be scruffy it seems. I have got her a ball just for her walks on the common. She loves chasing after it through the puddles and horse muck. She will not be clean for long. 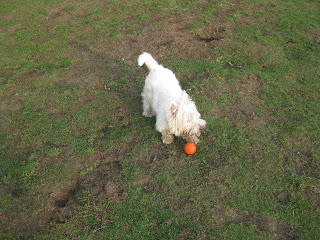 Summer with her ball. 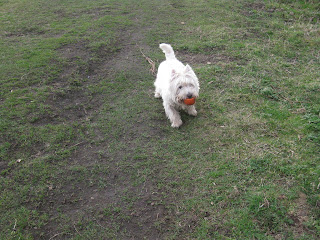 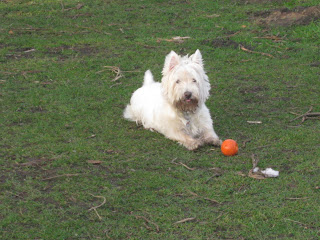 No physio today as Vel is ill. I could have really done with it as well. My neck is so tight. I have bean getting a lot of head pain shooting from my neck. It feels like some one has got my head in a vice. My balance is not very good either. My temperature changes are bad. I hope Vel feels better very soon.

A lot of wrist and elbow pain, in fact as the day wore on I had pain most places. Sick and dizzy feeling, more so on standing. My knees have swollen up and are very painful. My body is mixed up part hot, part cold; very cold like ice. Despite taking a lot extra pain relief the pain refuses to budge. Oh the joys of RSD. When I have a lot of pain it is better and less painful to keep moving around. When I sit the pain is worse. A lot of this is FIBROMYALGIA I think mixed in with the RSD.

Not a good night PAIN, BURNING and SPASMS. Cleaned up downstairs to try to work off the pain but it did not work. Made my friend a cake for her Birthday. The cake turned out very nice. I made one last week for another friend and she said it was very nice. I hope this one will be as good.

Bed about 5am too much pain to go before.

A bit better night still burning and cold but a little less pain.
Pilates was painful did the best I could, Some times I look around and see how much the others have progressed. I feel like I am stuck at the beginning. RSD has robbed me of so much. I have a very big cold sore on my lip and inside my mouth very sore and painful I think the RSD has picked up on it. Run down I think.

Andrew has bean in a lot of pain also the last few days with toothache. A dentist has diagnosed an infection and he has got antibiotics. I hope it does the trick.

Awake at 7am. The lighter morning are waking me up now even if I have only bean in bed a short while.
A little less pain I think but some days its hard to tell as it starts and stops like a train.

Physio today - A good massage and my neck and shoulders feel a lot better. Vel said as from next week I will be having home visits for awhile - how long he does not know. The new building is mostly finished at a cost of 16 million pounds. But there is not a place for out patients physio at the moment. 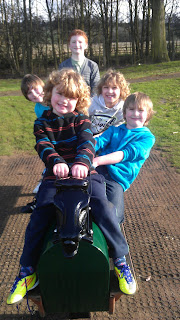 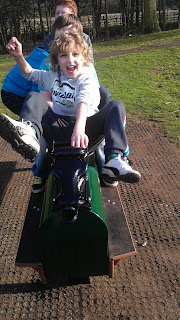 A sad day Andrew is going back to Amsterdam but it has bean good. He gave me a teddy for Mothers Day, Best Mum. Very sweet.

Lindsay and the boys are here as well. Andrew set off with Paul to the Airport and we all said our good byes. I don't know when we will see each other again. Its not cheap to come across. Paul is going to see Wayne as Andrew is going from Leeds Airport not too far from Wayne's house. Paul will have a rest there then make the journey back home.
One each from my three children and one from my grandchildren Jay-Jay and Tommy-lee. I also got the teddy I have already mentioned, a mug and sweets and some money so I was well treated.
normally benefit.

The last few weeks have bean very difficult and more painful. A lot more spasms. I try to keep going, but it hard. I read on an RSD site, that for some reason, that RSD can make you live longer. But do I want to live longer with RSD?

My head is a bit better but still more body pain than I would like, but what can I do take enough tablets to kill the pain and most likely damage myself as well and block out any function that I have. My whole life revolves round pain. Pain follows pain follows pain..

I am putting bubble wrap around the green house to keep in some of the warmth. Generally on the whole I feel a little better in mind and body. The last six months have bean quite hard with the hospital stay, Wietse going and now Vel. He will leave a big gap.

At least the weather has bean nice more Summer than spring.

Saw Dr Meta told him about everything that had being happening. He said I could of had a virus or infection. That would have made everything worse or just a flair up of RSD. He is putting me on some muscle relaxants, ZANAFLEX hopefully they will help, one a day then increasing slowly up to nine limit. I hope it does not come to taking nine. This is just about the strongest one I can take without being in hospital and monitored. DIASIPAM was mentioned but he said not for me I had them when in hospital and they sent me almost crazy.

He thinks I have become used to BECLOFEN. Instead of increasing it will try a change. I am reluctant to take them after the hospital blunder where they increased them too fast and paralysed me. Went to the chemists to get them and they do not stock them. They should be getting them in tomorrow.

Pilates - Did the best I could without pushing it but better than last week. Getting dressed is hard at the moment and drying after a bath because my arm goes in to spasm when slightly stretched or even just moved some days.

Went to see my brother David and his Wife Bev. Their little dog Shandy died recently. She was 16 years old. I know how they feel after loosing Sandy. I brought back a pram for Lindsay as she is having another baby due October 6th. I have not said anything before because she wanted to wait till the 12 week scan and to be sure the baby was alright. Lindsay has bean quite ill with her THYROID getting out of control. She is starting some more treatment so hopefully things will start to improve.

Got my ZANAFLEX now. Took my first one, very weird side effects, like 3D without the glasses. Faces coming out the television. I had to turn it off not that it made much sense any way. The walls coming in on me, voices all around everything looked so big. A very bad reaction. I dare not stand as I felt like as was in a dream. No, more like a nightmare. Later on the effects passed, after about an hour or more. I went to bed about 4am with no more strange things happening.

I still feel a little strange. Ifs that what one does, think what nine would be like - mind blowing. Night time took the second one not as bad this time but still unreal thing going on. I kept thinking this is not real and was able to cope better.

In town today with Paul another nice day. Did quite a lot of walking.

We took Summer to the vets as for the past week she has bean limping. Not wanting it to get worse we thought it best she went. Once at the vets her leg seemed to improve and she was getting a lot of fuss off the vet. When we said she was limping, she said "really?" When examined she found a sore bit muscular and gave her some anti-inflammatory drops, METACAM. She told us it would have got better on its own but its kinder this way, but not cheaper £30.00. She said to rest her but that's hard as she thinks she is ACTION PUP. We will do our best.

Third tablet not as much side effects. I tried to concentrate on my breathing as much as I could to block out the images. I could hear Wietse's and Vel's voices saying breathe Gill breathe (they both said this to me when I held my breath because of pain being inflicted though physio).


Well as you can see the past month has not bean the best but things can only get better I hope.
Take care every body in what ever you do.
Love Gill.