I think spring is here, a very warm day. The Fair has arrived so Summer and I have to go back to the main common for now, its only here for the week but takes around a week to set up. I know there is a lot of water on there so might be a bit tricky to put up the rides and stalls..

The main common is still very sticky, but I think if this warmer windy weather keeps up it will soon dry. Summer found a lot of mud so had to be washed down in the bath. She loves the water and mud and will charge through it if not watched.

Not too bad a day pain built up towards the end of the day. I had Jamie-Lee for a few hours while Lindsay went to a football meeting. I had made her some clothes for her tiny dolls from her dolls house. I did not tell her and the look on her face was lovely when she saw them. 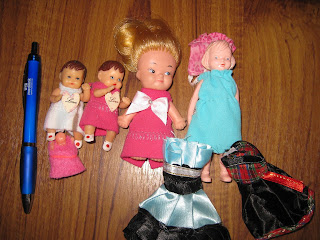 As you can see tiny, the blue and tartan dress I bought.

She had a good time playing with the house and dolls. Lindsay picked her up quite late around ten. Jamie-Lee said I usually go to bed around eight, not tonight I said. She did not even seem tired. I know I was and the pain had reached tablet level. Had a nice BADEDAS bath hopefully that will ease it a bit.

Pain is at a high again today, taken too many tablets with not a lot of relief. I said yesterday I thought the common was drying, it is. Hopefully there will be no rain for a while or it will be back to a mud bath again. Summer was OK today because I put her on her lead when there was any mud around. She did not like it much but she kept cleaner and did not have to have a wash down.

I decided not to go to Pilate's today as still in a lot of pain just about every joint and muscle I have hurts in some way.
No use sitting down for long though making it worse, so I sorted out the seeds in the greenhouse and sowed them. Flowers and cucumbers no tomatoes as I did not have any, will get some on Friday.

Very warm, even hot today very nice. Lovely on thee common and I was able to wear my walking shoes instead of my welly boots.

Nes came round and asked me to look after Tabby Cat while they were away a few days.

Cleaning up today and washing. Sat outside when Nes was here and it was good and so warm. Our garden is south facing so gets the sun most of the day.

Sunshine is still here so no jacket to go to Age UK. Busy but not over the top and no incidents either.
Still hurting but not quite as bad. Not too many coffee drinks  on the cappuccino machine either, so that helped my pain. Still taking far too many tablets still, but what else can I do?
Bit of shopping then home.

Up later today but felt worse for it, bad head the sort that feels like my head is dropping off when I lean forward. Taken IBRUES hopefully this will help. My overall pain has gone down a bit but still not good.

The walk on the common was nice, Andrew came as well, Pup was so pleased and showed it as well by running around like someone crazy. A good walk and she did not get mucky either.

Tabby is doing well and eating his food and giving me lots of purrs and head rubbing. I sit with him for a while and stroke and cuddle him. His family are back today so he will be happy. I think he has missed them especially Ben (10) who usually sorts out his needs.

Headache good now and other pain not too bad either, so a better day in the end. I even made some small sponge cakes, they tasted very good. Paul put in some sausage rolls as well. 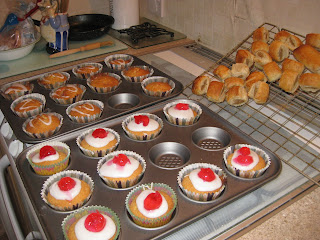 Take away for tea tonight, so no more cooking. I think for the rest of the day I will  just take it easy, then a bath later.

Summer's hair cut Maxine cut loads off, cutting for over an hour. She looks so small now and so white too. She had her nails clipped as well. Summer had a long sleep as she was very tired she did not get her morning sleep after her walk. Trouble is now she is moulting a bit so everywhere is covered in cotton wool like fluff. 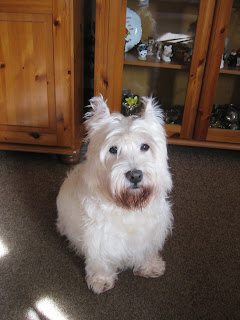 Before she was cut. 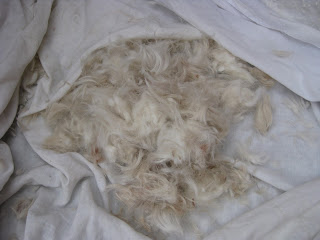 All the fur off her. 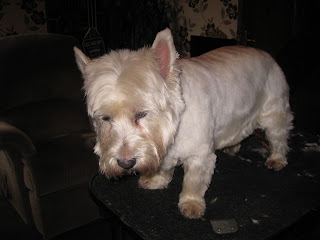 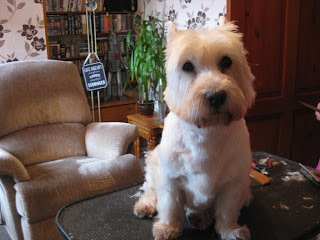 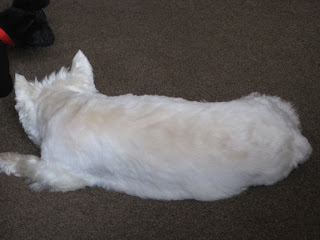 No Pilate's today I just don't feel I could cope with it.

A very windy walk on the common the over night rain has made it very wet again. Summer was mostly good and did her best to keep out the mud.

A few pictures of the horses as promised. 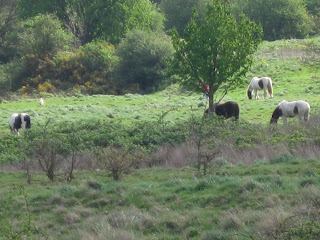 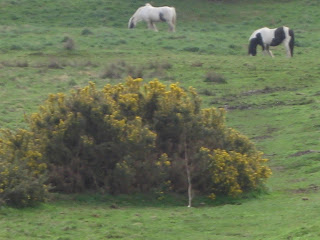 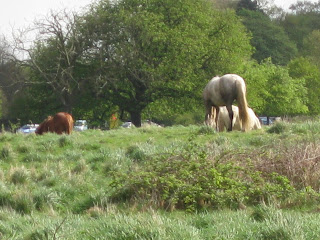 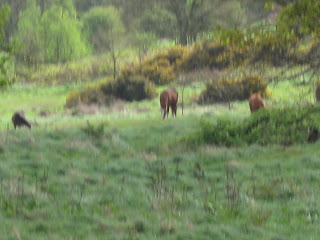 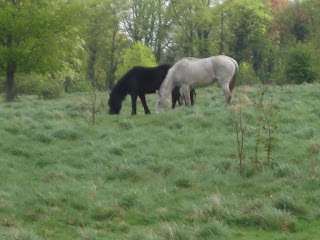 These are a bit far away as the horses were in the wet muddy bit. Not too sure when the west common horses are going back there. I know our common is a lot worse for them being here.
Maybe they will all go back there for a while so ours dries out.
A few days ago someone had taken a whole section of fence away so the horses could get out. Today it looks like they have had another go. This was only replaced two days ago. Why do they do this it does not help anyone.


Well the trees think its Spring and are coming into flower and leaves forming. 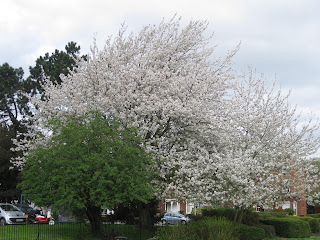 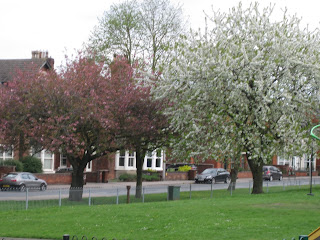 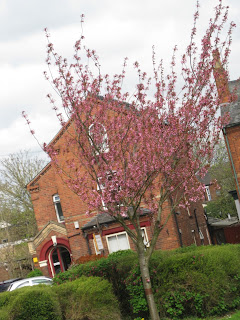 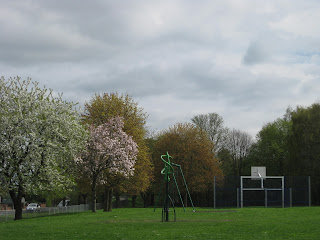 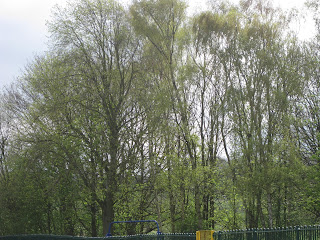 Pictures taken from the park.

Cold wet and windy, gloves on again for our walk could had done with my hat on as well.

Age UK steady today- not over busy enough to keep me busy though. More new rules only one person on the till. I am quite happy to do the rest and Jenny is happy to be on the till. She said but you will have more to do. She did help me out and and it worked quite well. Everytime I come here something has changed.

Very tired and hurting, when I got home wet too as the rain did not really stop all day.

Today I decided to do the car park bit at the back of our garden, WHY--? this is over grown with ivy and small sycamore trees  Left they will grow big and block out the light. This took a lot of doing but I got there in the end. The problem was the roots of the trees, when done before Paul only cut them
so they had grown more deeper roots. Summer stayed with me the whole time looking down on me.The car park is a big drop down from our garden. I also had two Robins watching me and eating the bugs and worms.

A cold windy day more like winter than spring. Summer had a good walk and got muddy on the last bit. I took her to the spring water and she washed her legs and feet. I bet it was cold.

My friend John is here later so that will be nice to catch up on his news.


Well here we are heading for May hope the weather improves and we can get rid of the coats for more than a week. Hope you are all well and doing the best you can. All the best love Gill. 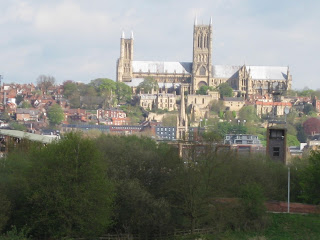 A picture of the cathedral taken from the common.