I went into town today I think everyone had the same idea as me - it was packed. I had a few near misses with my scooter, but just about managed to keep the bumper to its self. There were a few people I would have liked to hit though.
Pain levels are quite good about 4+ spiking to 9 but not too much. Temperature changes about the same. When I returned from shopping I had a lay down and actually went to sleep.

First monthly injection vitamin B12 this one really stung for about an hour the worst yet, It was still sore after two hours. I have bean told they sting because its a vitamin and its a reasonable dose 1ml.
No lay down today as Russ came round had a go on the WII. I won him again at bowling and drew at table tennis.
Pilate's. I am enjoying it very much now and I can now go on my bike. For the last few day I have bean suffering with my IBS, a lot of pain and severe bloating. I thought I would sleep better tonight as no rest earlier but no luck, I slept worse.

Lot of shooting pain in my right foot. Also pain shooting from my left side of my neck up to my head, they really drains me. I had a weird sort of black out later in the evening, Andrew said I was like asleep with my eyes open and not responsive. When I came out of it I was terrified like waking from a bad dream. Bed 5am I had a rough night with spasms throughout my body.

I woke to bad pain in my right wrist and arm joints I thought it was the WII at first may be overdoing it, but the pain spread to all my joints as the day wore on I took IBRUS and DIAHYDROCOEDINE. This helped a little.

Joanne from Pilate's gave a talk on tapping, the alternative to acupuncture.
(for more info: www.emofree.com )
Russ went with me on the bus, it was very bumpy and played havoc with my foot. It was a very interesting talk. Later in the afternoon I began to feel very dizzy and in a lot of pain and spasms though most of my body. Russ made sure I got home OK. I rested, then later on felt a lot better. I think it was the bus journey starting the pain off and tiredness.

I now feel a lot better, pain back to normal rate. Temperature is all over the place I wish it would calm down. IBS is still playing up.

Doctors today I asked him about dizzy spells and black outs, he thinks they are side affects of the tablets. The pain is probably the fibro. He took my blood pressure it was a little low so that could account for some of it. I went into town but was in a lot of pain. I came home and had a lay down.

Physio - Wietse said I looked very pale and I was not too good on my feet. He agreed about the tablets and fibro. On the way home on the bus I had trouble sitting upright my body felt very floppy and I was very unsteady on my feet. I really ached all over. Am I coming down with something? I hope not. On getting home I had a lay down. Later on I did not feel any better and was having trouble talking.

We are going on a few days holiday to Caistor near Great Yarmouth. My little dog Sandy is coming with us. The journey was alright not too painful. When we arrived it was very sunny. 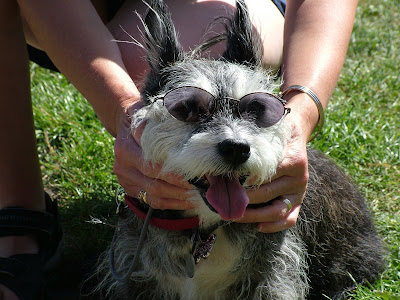 Sandy chilling on her holiday, she even had her own room with her basket in.

We went into Great Yarmouth to look round. Its a very hot day. I walked too much and paid the price with a lot of pain. Back at the chalet I had a lay down.

We went on the beach it was very warm but windy the sand stung the backs of my legs. IBS still playing up. My joints are still painful. 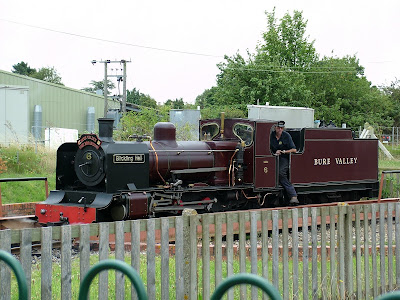 Today we went on a steam train BURE VALLEY STEAM RAILWAY ( www.bvrw.co.uk ). The train was very small almost like a toy. Two of the carriages were named Annie and Carbelle off Thomas the tank engine. The train chugged along though the country it was most pleasant. We looked round a few shops then got another steam train back. The weather is still very hot but more windy. 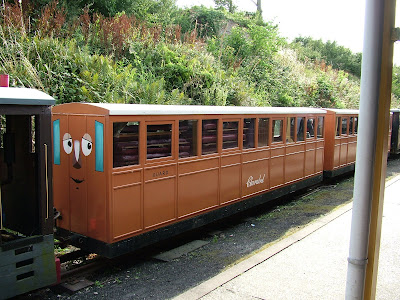 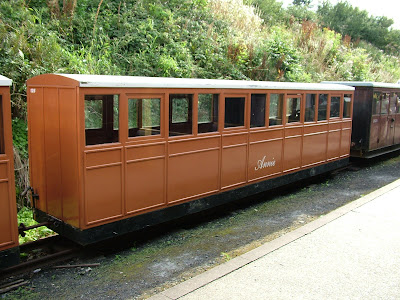 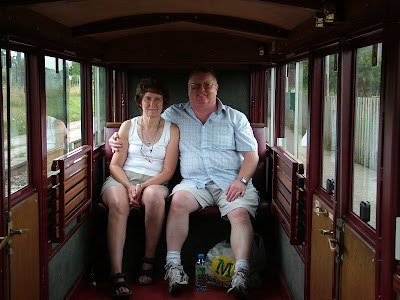 Me and Paul in side the train as you can see it was tiny.

Home today the journey was quite smooth. It rained on the way home the first rain of the holiday. The joint pain still continues.

Balance is better than it has bean. I think the Pilate's has helped with this. Pain level are on the whole mostly down. Even the temperature changes have bean better the last few days.

Physio again have not bean for two weeks. Wietse was pleased with the way I look, a vast improvement on the last time I was there. He said the joint pain was more than likely the osteoporosis playing up. I told him I always get worried as every time things look up, I seem to get knocked right down again. He said think positive, one step at a time.

I walked too far today and have upset my foot. Its Pam's birthday today We got her a Lincoln City hat and scarf. She loved it. The football club gave her a signed football as I told them how ill she had bean. She and Malc go to the home matches now. It was a lovely gesture - she was almost speechless.

I feel this month all though I still have had a lot of pain but things are a lot better than previous ones, no accidents. May be this is the start of better days. I hope things are reasonable with you all and you are enjoying the sunshine while it lasts.

Did you catch my guest blogger post on Kris Carr's crazysexylife.com, the author and film maker of Crazy Sexy Cancer, about RSD overcoming chronic pain? I was sooo excited!