To start with an apology as I have not updated for a while, I have bean very busy in the garden as everything is growing so fast. Also my little dog has not bean too good.

Since my run with Pete things have bean good. Obviously I felt it in my joints and muscles but no more than any one else you have not run for a while. My RSD is at the moment is either very good or very bad when I get pain it is more severe than usual but is lasting less time.

Physio- Wietse put in the usual needles and we discussed what had bean going on. I told him about the run he was nearly as happy, as I was. He advised me to not get too excited and to listen to my body, but he was well pleased. At the moment I feel the best I have felt for a long time, may be this is the start of better things to come I hope so as I think I deserve it now.

After taking out the needles both my ears bled and hurt a lot.

I am in the garden it is red hot, the greenhouse is even hotter all the tomatoes have now bean planted at last. I am sun burnt on my shoulders and feet my RSD foot does not like it at all, the pain is burning and making my foot go into spasms. Over night it felt like it was on fire but the burn on my feet is only slight. I think the RSD reacts the same way to sunburn as it does to ice. My ears are bruised from the needles from yesterday, and are quite painful.

Doctors today for tablets and to update him on any changes.All tablets are the same apart from BUSCAPAN which is now stopped. I will hopefully try to reduce the morphine next time as he said it is too soon yet, as he does not want me come of too fast, but I have every confidence I can as I have be for. He will get in touch with ENT as I still have not an appointment it looks like it has bean forgotten like the urology one. My bladder is not a lot better as yet but the Doctor said it can take eight weeks for it to calm down after a catheter has bean in for a time. Other wise he is pleased with me. He said, like Wietse, the running is good news.

Another run with Pete. This time it is at Whisby nature park as it is the running clubs handicap race. A lot of people were surprised to see me in my running gear one said I must have bean doing some secret training. I said no just sheer determination and my foot able to move better now, after the spasums epasode in hospital. The weather has changed its very cold now. We went round the park for fifteen minutes then Pete did his race I could not take part as it is too far - 8KM, but watching was good but so cold. I borrowed some of the coats people had left to put on after they had finished running. 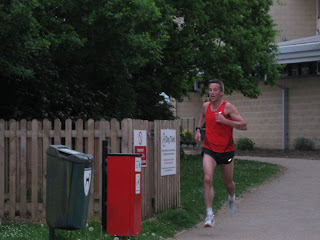 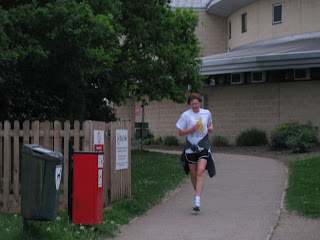 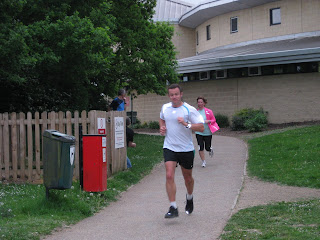 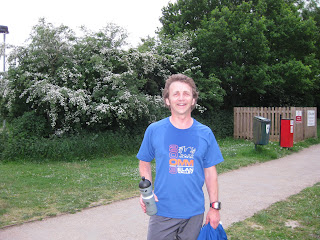 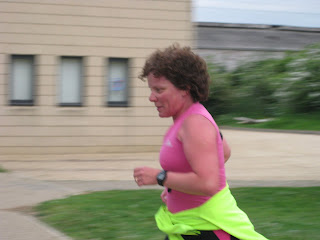 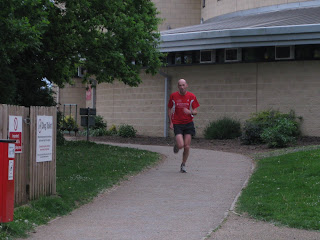 Pete - my running buddy
After the race (Pete had a good run) we did the remaining fifteen minutes. The run on the whole was harder than the last one to Boultham Park but the terrain was undulating so a bit of a challenge, may be too much, also the cold was taking my breathe away. On the whole I think I did quite well. 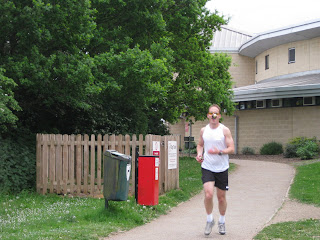 The Running Juggler (Note the position of ball!) 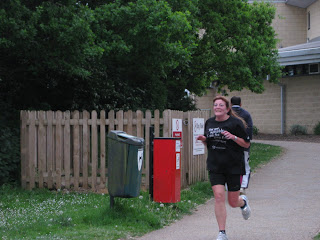 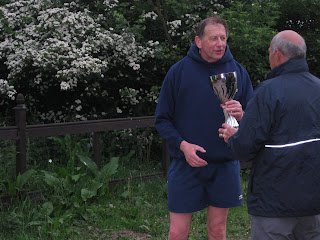 Rodger the winner of the race 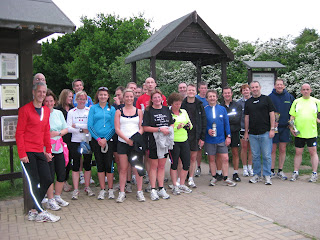 A lot of the members but not all of them
26th

Pilates - the first time since hospital. I found it quite hard as everybody else had moved on a step but with Joanne guideness I did reasonably well. My joints are very stiff and my bones cracked. When Joanne mentioned bone by bone for one of the moves my brain got the words of the song, leg bone connected to knee bone, I could not get it out of my head and found it hard to consecrate. On the whole it went Ok. The chips were good after the session.

Physio again - I told Wietse about my bruised ears it was still a bit blue so he could see for himself. He said it was because the needles were very tight in and when removed they bled causing bruising. He did not put needles there this time. He was very pleased about the last run with Pete. I told him I felt that one more than the previous one and had felt my muscles pulling but not too painful.

After physio I did some shopping but walked too far and was in pain. I think it is weird that I can run for a short way with not too much pain, but it hurts when I walk for the same distance or less in most cases.

Today I am having a easy day as I have a lot of joint pain and feel not too good. I feel that I need this as the last week has bean so busy for me, it is nice almost to be in discomfort from activity instead of RSD related.

Well thats just about all this time as you can se a good month mostly so may be its my time now. I do hope so.

I hope things are reasonable for you all and painfree as possible.
Love Gill