Paul and I are going away for a few days. We intended to go to Wales, but as I have not bean too good, we decided to go to Hunsanton we went there once to look at a electric three wheeler bike, and I liked what I saw. It is so quiet and peaceful not commercial like a lot of seaside towns.
When we arrived we had not booked anywhere as we did not know where we were going till that morning. The bed and breakfast we chose was very nice, the owners very friendly and the place very comfortable.

They even let me watch DVDs in the lounge late at night and early morning, the breakfast was cooked to our liking, very nice, it just about filled me up most of the day with only a light snack at dinner. 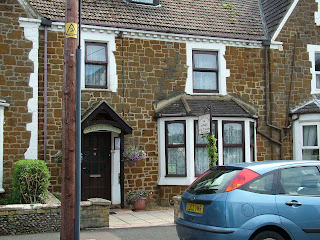 The bed and breakfast where we stayed.

One day was spent looking round Hunstaton and the close by villages. A lot were very pretty and so quite. These are some of the pictures we took along the beach. 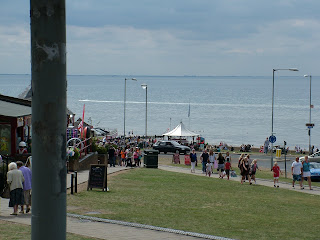 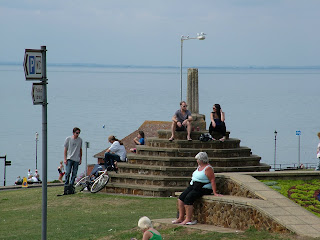 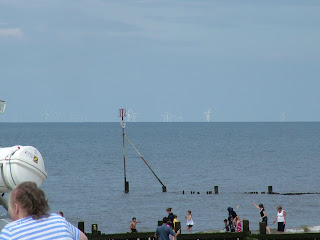 We visited a lavender farm I got a lot of cuttings, you was suppose to buy them but I just took a few pieces from the plants. They sold a lot of organic foods we bought some flour and Paul bought some cider and beer. 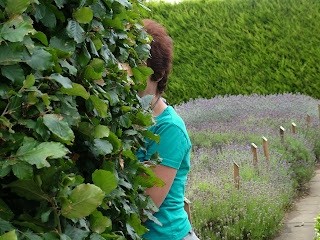 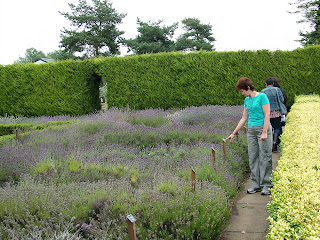 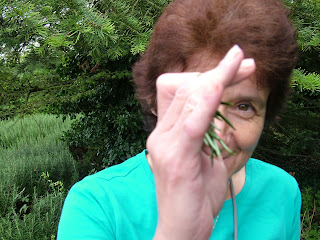 We also went in to Kings Lynn a shopping town near by. We walked round a lot of the shops, too many - I was hurting and my body was getting very tight. We decided to call it a day and went back to the bed and breakfast. After a rest we went for a meal which was very good and a walk along the beach then back to the room . 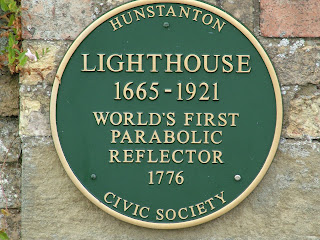 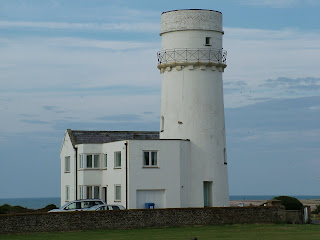 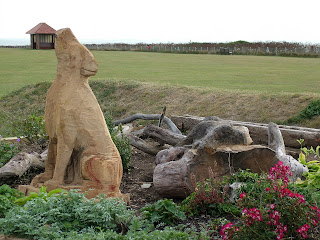 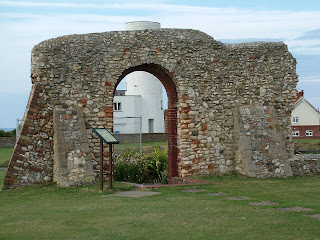 The only rain we had was during the night or late evening. The few days we had were very good and I enjoyed them. Soon it was time for home with a stop and sandwiches on the way. I can not travel for long distances with out pain so we have to stop a lot. We arrived home but I was in a lot of pain from the extra walking and traveling but nevermind Wietse will sort me out tomorrow.

Physio I think I need it. Wietse put in the usual needles we talked then after the needles came out he massaged my very tight neck and shoulders. He said there were very tight and stiff as he pulled and pressed the pain was quite bad then suddenly something sort of jumped and I felt instantly a lot better, if not still very sore. He continued to massage more I could feel them getting less tight. After he had finished he looked me straight in the eye and said how does that feel, or do I need to ask I said no my face said it all. I know I will feel the benefit over the next few days.

Today I am up early 7am a very short night, bed at 4am as Paul and I decided to do a car boot at the local foot ball club Lincoln City. When we were there last there were loads of stalls so we though it would be a good place. WRONG there was only one more stall there as we got there early we thought there would be more people turning up we were very wrong just the two of us and they went at ten o'clock. We picked the wrong venue, next time we are going else where but we still made ten pounds about and did not pay for the stall. The man we spoke too at the grounds said it was though lack of adverting and another one opening up quite close bye. Next time we are going to that one.

Today my right hand RSD side is dropping things like the kettle lucky for me the water was cold. My fingers are turning white, this usually happens in the winter when my hands get very cold caused by RAYNARD'S but its very warm at the moment so I am unsure what is going on. I think maybe its the RSD spreading, as I am getting some signs of this, burning pain, tingling and some times hyper-sensitive. I am getting a lot of spasms in my right leg and sometimes left leg mostly at night.

My bite that got infected has now improved a lot and is no longer infected but another bite I got is. I am not going to the Doctors at this time as its not as bad as the last bite. RSD must taste good. My right eye is very red and sore that seems to be infected also. I think my body is giving up or going bad. My throat is also sore and red. This could be from overdoing things from the Hunstanton trip

Another car boot this time lots of stalls we made about fifty pounds this time and some things we cold have sold more than once like a little monkey/micro bike. A lot better day but very tired I was up about six o'clock but it was worth it. Had a lay down and a little sleep in the afternoon.

First go on the strider since I broke my ribs. It felt alright, even though I only did ten minutes, its a start. My ribs were alright. I am still having problems with my fingers. They are reacting to hot and cold things as well as pressure from holding things like knives or bags. Still getting lots of spasms. My eye has improved and is not as red also the bite has gone down. I have now got a cough but not too bad. My knee has bean giving me trouble as well it feels like its on back to front and keeps swelling up.

Today I am going for a run with Pete. It is the first since I did my ribs so I am expecting it to be hard. Both because of my knee and because of lack of exercise over the last few weeks. You may think I am crazy going for a run but I get a lot of pain if I do nothing and not a lot more if I do things so I might as well be happy and do things. The run went well not many stops or too much pain. On the way back it rained very hard but I did not mind as I like running in the rain so did Pete. I enjoyed it a lot. Thank you Pete.

Physio again today. Wietse did the usual. I asked him about my knee he said there is something not right it could be the way I walk or walking more, and running. He gave it a massage. I am to mention it to the Doctors next time I go. He said he thinks my fingers are a classic case of RAYNARDS even though its not cold it can happen.

My temperature changes are still very much up and down with not a lot of control over them.
I had a bath with Epsom salts as I have bean told it can help with pain. I did not put much in as Wietse told me it can upset the RSD. I don't want that.

At the Doctors today. I asked him about my knee he thinks it may be bone pain from my osteoporosis as I told him what it felt like. He thinks the same as Wietse about the the way I walk that could be causing it or at the least not helping it. All my tablets are to stay the same for now till I get over the extra pain. He said considering what I have bean though the last six years I am doing very well. Sometimes it does not feel like it though.

I am having my hair cut and coloured. My hair dresser comes to the house and has bean for about five years. So it makes it a lot easier and nicer for me. The finished result looks very good.
My right hand over the last few days has bean quite strange its bean very cold and I keep letting go of things. I have dropped a lot cutlery and plates just seem to slip through my fingers. My fingers on my right hand have bean turning white and purple and are very painful.
But when did my body act normal?

Physio much the same. I am heading off to Halifax for a few days to my oldest son house, to look after his cat while he is on holiday in Disneyland Florida. Wietse has told me not to over do it and to be very careful on the many hills as not to make my knee any worse. 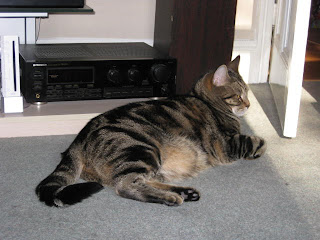 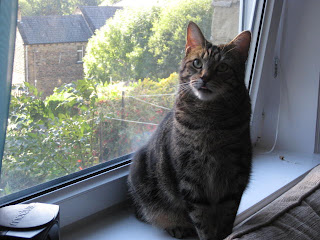 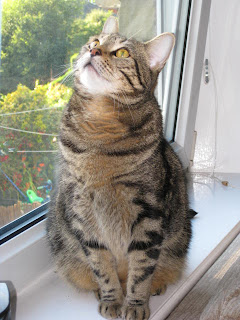 Did I see a spider? He loves spiders.


The first night I slept fairly well considering its a different bed but it is very quiet here. Timmy cat was very pleased to see me. A neighbour close by has bean looking after him up to now but, nobody was stopping there. I have bean doing lots of walking maybe too much, getting totally lost one day. 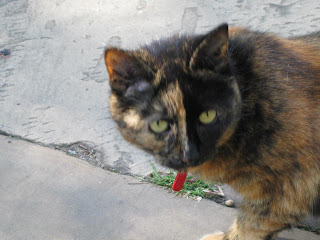 A cat that made friends on the day I got lost. 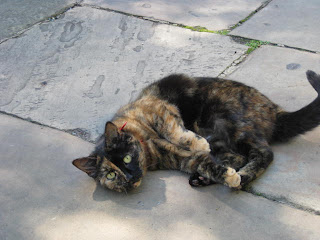 He has got a very unusual face.

My knee is swollen and sore at the moment. The pain does not seam to get any worse when I use it in fact its worse when I put it up on my foot stool. I am doing a few bits for Wayne as its a long day to be doing nothing but not too much as I am meant to be having a rest. 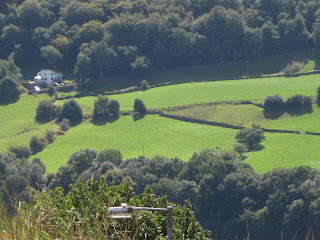 When you get up high you can see for miles the views are very soothing. Just about everywhere there are big hills. I saw quite a few squirrels but could not get a picture of one as they were too fast for me. Well its time to say good bye to Timmy and Halifax for now. While I have bean away Paul ,has just about finished the bedroom decorating off, its looks very nice.