Very cold today on the common, this did not seem to affect Pup as she ran around like a loonie.

My shoulder is tight and very painful, hands going numb. So far (1pm) I have not taken any extra tablets.
Later I had a bath with the oil that I got as a present from Bev for Christmas. This warmed up my body and helped to numb the pain if only temporary.

Spoke to Wayne in Halifax, he said they have got a lot snow. His journey home from work was a nightmare for him and a lot of others on the bus. He left work around six, he phoned us around eleven and still was not home. People were abandoning their cars and getting on the bus, most likely thinking it would be safer. Wayne said the bus was sliding all over the road. What a journey he said. Over night rain got rid of most of the snow.
We had a bit of snow but nothing like that. Halifax has way more weather problems than we do. Lincoln is very lucky or unlucky which ever way you look at it and get hardly any snow.

Pilates journey was good, a quite easy ride, one lady asked me how I got on with all the wind. OK I said no problems. I thought I must have had back wind most of the way, hard ride going back I think.
Pilates session was good but so painful at times pain in both shoulders and arm and fingers went completely dead no feeling at all. The feeling returned after around half an hour but not before causing more hot ache type pain. Even going home my hand was not back to normal. As I thought head wind most of the way. Thank goodness for electric pedal power.

Later while sat down my right heal was hypersensitive and so painful all I did was just brush my hand against it. this set pain off everywhere and again took a long time to settle down again. This time I took extra tablets IBRUES. Quite swollen as well.

Age UK-- a bit late getting there as zip stuck on my coat. A busy day, I dropped a cup and it bounced, my fingers are not good, dropping spoons and many other things as well. Over rung in the till twice as fingers not feeling the buttons well. Polly sacked me not once but twice, even though I don't get paid work there.

Bit of shopping, two pairs of pj's and a dressing gown. My others are irritating my skin as a bit rough on the inside. A normal person would not feel this but someone with RSD it can be very bad. I have a nerve rash at the moment so my shoulders are quite sore. Right foot hurting as I walked back home.
I was quite pleased when I got there today, as very tired. Bean a tough week with pain.

Lindsay around today with Jamie-Lee and Tracy. I have not seen them since New Year as Jamie-Lee has had chicken pox. Now all better, still Tommy-Lee did not get it or Jay-Jay so far.
Lindsay has not had a good week either still bad heads. Doctors are still unsure what is the plan.

Andrew played with Jamie while I finished her jacket off and she took it with her. I will have to get a picture at a later date.

A easy day just sorting out paper work and cooking tea, roast beef for Paul and I, pepper tart for Andrew, plus usual other bits. Not as much pain today but fingers are still not right.

Lindsay phoned and said Jay-Jay had got chicken pox, he was here last week so I could still get them off him. Hope you don't suffer too much Jay-Jay and get better soon.

Later Lindsay got in touch and said now Tommy-Lee has got it as well. Get better soon Tommy-Lee. Jay-Jay is covered in spots and does not feel to bad. Tommy-Lee has hardly any spots and feels bad and is in bed.

My body feels like it is on fire and very HYPERSENSITIVE back being the worst.

First pictures of the snow drops in my garden.  I have two lots, these ones about a month before the main lot. 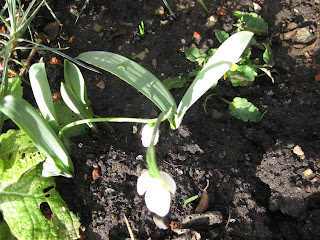 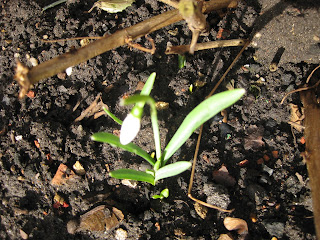 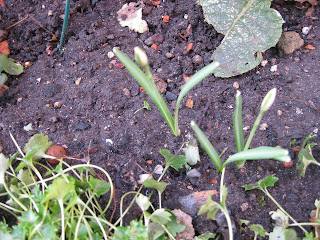 My friend here today. He asked me if I would mend his pockets on his coat. He usually goes to the market, I know they can charge a lot. I said give me it here and I will do it now. He was very pleased as bean loosing his pens and money in the lining.

Summer was a bit naughty today she got the lid off her treat tin and ate a bag and half of mixed treats. Andrew said she was clever a few days earlier I got her a new toy-- guess where the treat is. 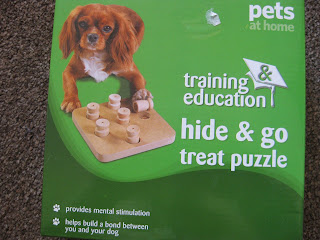 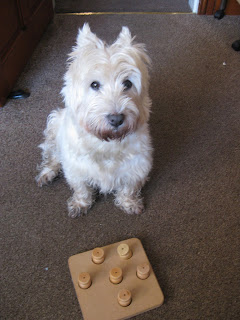 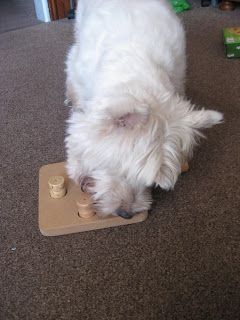 She did very well at the game and thought she would help herself. When I told her off she wagged her tail and put her head on one side as if to say what happened.

B12 today, this hurt quite a bit this time. I asked the Nurse about all the joint pain I have bean getting and if it could be the OSTEOPOROSIS, I stopped taking the tablets last year. She said I would have to see the Doctor about it. I will try to get an appointment if I can, not easy now since we have merged with another practice. Bad head today pressure around the eyes dizzy sore neck, when I bend forward. When I do the exercises from physio my shoulders and back are going into spasms. So not doing too many at the moment.

Not too good today no Pilates head pounding and quite dizzy. Joints are very bad hurts to walk if fact, it hurts to even breath. Very tired as well but as usual no sleep. Andrew and I were watching TV when it started playing up so he turned it off. Problem was it did not turn on again. Wayne bought me it less than two years ago. So I will get in touch with them to see what can be done if any thing. Two years is not long for a TV. The warranty was for eighteen months.

Suppose to be meeting friends in town today for a chat and cuppa. Not really feeling up to it but this has bean arranged a while. I did end up going and quite enjoyed the time with them, nice to meet up.


Later I did some more of a puzzle I started a while ago  very difficult one. I finished, with help from Andrew and a little bit from Paul, around midnight. 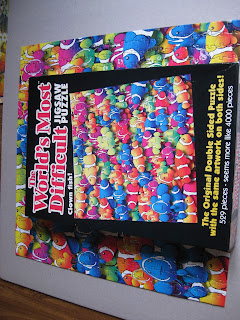 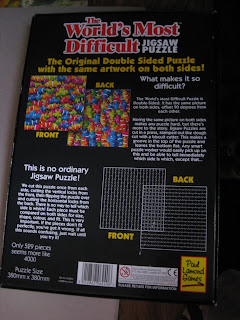 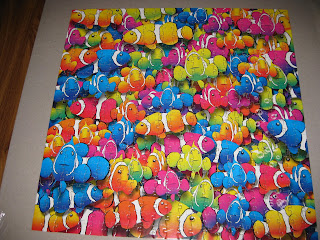 I agree this was one of the hardest puzzles I have ever done. When I told people what I was doing, most said I could never do that, no patience.

I rang up the television warranty place and spoke to a very informative man who said he will see what he can do. He agreed it had not lasted very long. He needs to speak to Wayne as he has the receipt and did buy it. Wayne thinks they will try to sell an extended warranty then mend it.

Age UK was very busy, straight in with the lattes and cappuccinos this was the trend for the rest of the day. Jenny does not use the machine so it was all down to me. I know my wrists hurt a lot. Setting off the CARPEL TUNNEL.
Got a new zip for my coat decided it was worth the effort of putting it in. I don't like doing zips, find them hard to get straight, then my fingers are not the best with spasms and pain. I never know when they are going to jump or give way. Not too good when using a sewing machine.

I got the old zip removed and the new tacked in ready for machining tomorrow.

I managed to get my zip done, after not a good start. Cotton got all taffled up in the bobbin, then the needle broke. After that things went better and I was able to make quite a good job of it. Hopefully it  will last a few more years now, as its a long parka type coat, warm and fits well.

Afternoon watching Robot Wars with Andrew. Some good battles today, even the big house robots got taken out by one of the battlers. Very good and exciting viewing. I used to watch this quite a lot years ago, seems it has come back again. Afterwards I felt quite stiff and in pain so took Summer out for another walk, she was very pleased and could hardly wait to get out the door. Later I did the ironing.

Cleaning up today downstairs, Paul is helping me. 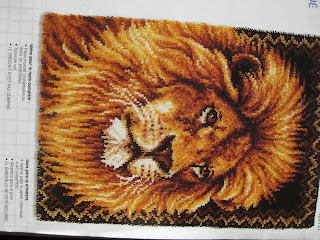 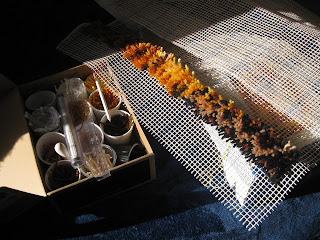 I have now started my Lion rug this will take a long time to do. I like to have a mixture of things on the go so I can have a change. This is a big rug and will look very good WHEN finished. The grid is quite hard to follow but I will get used to it. Done eight rows so far only one hundred and thirty two to go!!.

Sorted out my crystal glass cupboard, this I hate doing as my hands are very unpredictable so I could drop them. Today my hands seemed quite good or so I hoped. Anyway it was a good day and I got it all done. Shines now and looks a lot better.

Started knitting a small toy called Charlie this will keep me occupied with the rug as well. Nice to have a change I think. 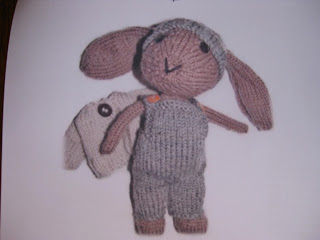 Not at Pilates today again I hurt too much, body very hypersensitive too, headache and tired so I will rest a bit if I can..

Well here we are at the end of January not going too good for me but it could be worse. I wish I could get up in the morning and feel like I have actually bean to sleep and may be without pain. Is that too much to ask for?                        All the best to you all Love Gill.