Well January 2018 what will this year bring? Less pain and discomfort for me hopefully. A better year for my children too. Last weeks PHYSIO so far has not done too much to help but its only the first one. Neck and shoulder very tight. Not sure what is happening with ACCUE as I don't think that is as effective as it was.

A cold wet day. Jamie-Lee was up at around eight thirty and well rested. Tommy-Lee around ten thirty. Both said they felt good. Took Summer for her walk on the common and we came back across the Fair common and saw all the carcasses from the fire works last night. Later I took Tommy-Lee and Jamie-Lee to see them. Jamie-Lee was fascinated by them all. Summer was pleased because she had two walks in the morning.
Back home for dinner Lindsay came later to pick them up and they all stayed for tea. Paul kindly bought us all a Chinese take away. Very good it was too.

I have had a lot of pain and spasms in my legs just lately.

Cleaning up downstairs today. Night time a build up of pain and very bad spasms. I took one BACLOFEN to see if this would relax my body. Not a lot of good, made me feel very light headed. Andrew said I kept dropping off to sleep. My body felt very strange and heavy. At one point I nearly fell off the chair.

My right foot was going crazy in bed, The pain was just like the first RSD pain over thirteen years ago. This worried me as I know it can spread as it already has, the left leg so far has remained good. I will just have to hope and wait and see what happens.

Woke to a very bad headache and feeling very drained. I am sure its the side affect of the BACLOFEN. I used to take this all the time, up to eight a day.

Went to see Ben next door. He is not doing very good, his quality of life is not good now and I feel so sorry for him. He sleeps a lot of the time.

Age UK. Went in early as asked, last weak, by the kitchen manger as we have new menus and she wanted to go through them with Jenny and I. She did not turn up and Polly the chef filled us in. Not a lot of changes so that was good.
Steady day to start with, then a load of customers came in. Lots of lattes and cappuccinos to make. A busy day in the end. Not too good a day for me though, a lot of pills popped. Walked into the main town with Jenny and did a bit of shopping then home. The day started off wet and cold and still is. Dark when I got home around four thirty.

Went to see a little baby today called Rupert, he was born on the 21st December so cute. I took the jackets and mitts round, I had made last year for him. The smaller one looks like it will fit now, they both love them. 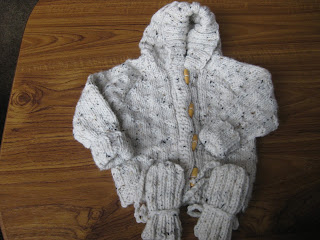 This one we think will fit him now. 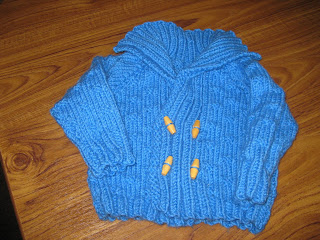 This one for later.


Rupert fell asleep on me then woke for his feed.

A sharp frost today and sun at last but not feeling too cold on the common. A nice walk for a change without getting wet.

A lot of pain today, more so when I try to rest and relax. That's the thing with RSD not letting you
try to get rid of the pain, it's as though it enjoys making you suffer. Suffer you do as well. A lot of spasms in my legs. My right leg is giving way a lot. My hands are terrible too, dropping a lot of things.
Just another day in a life of an RSD suffer. People look at me and think there is not a thing wrong with me and actually think I am a very fit person. Yes I am, compared to many, but not like I used to be.

Lindsay (my Daughter) phoned and said Jamie-Lee has got Chickenpox. I have not had this so I need to keep away. I have already bean told Chickenpox would be very bad for me. To the point of may be have to be in Hospital. WHY because its would affect the nervous system, which is already under attack from everything else. I still might get it as they were both here for New Year. Tommy-Lee so far has not got any signs of it, Lindsay did say he did not feel well.

I feel very drained but that has become the normal for me. Lack of sleep and pain is not good for any one.
Pilates today first one of the year. This went quite well still shoulders are bad. A lot of spasms every where. I took the lady, who brought me home last time when my bike went wrong, some flowers. She was very surprised and pleased as she said she had no flowers in the house. I was very grateful to her as she saved me a lot of extra pain as I would have had to pedal without electrics. This I can do for a short time. There are a lot of hills around the Washingborough area. I just need to get new brake pads, as brakes at the moment are not good. I need to use front brake as well. As I said a lot of hills down as well as up. The down ones I usually just turn off the power and free wheel down. GREAT feeling.

Bringing my bike in the house my right leg gave way and I fell causing my knee to hit the radiator full force. I screamed as the pain was so bad. I felt sick, then the RSD full body pain hit me. I had to sit down as my body was under attack and it felt like I was plugged into the mains, with pain every where shooting throughout my poor body. This took nearly an hour to release. My knee swelled up and had the imprint of the radiator. I got away without serious damage though.

I am doing the exercise Neal the physio gave me, well one causes spasms so I have stopped that one. I have an appointment on Friday so more exercises will probably be added or taken away.

At last my friend Bev is here I have not seen her since last Autumn. We had a good long catch up chat. Exchanging presents as well, Christmas and Birthdays. All her family are doing good. Her son Russ, I used to run with, and he spent many hours here, playing on the Wii or just chatting. That was until he moved away.

Age UK I just got to the counter and there was an order for cappuccinos then more orders followed. A very busy day. Hardly a minute to think. I had bean serving and had no chance to even speak to   Jenny. Joy, Sheila also Angela and her friend, came in but I had little chance to talk to them either.

After my dinner-- we get a free one as a thank you for volunteering, I set off up the hill for my physio appointment. I told him how things had bean and what exercises were helping and the ones that were not. He gave more to do as well and back in three weeks. After I walked back into town and did a little bit of shopping. Around five thirty when I got in, very tired too.

Went to Halfords to get new brake pads for my bike, eighteen pounds in all. These I will try to get on later today or tomorrow. I do not need my bike  till Wednesday.
When I got back Andrew was down and listening to folk/country music.  Paul was at football.

I managed to put on my new brake blocks and got them adjusted. Now I can come down the hills with a bit more confidence as the last two weeks my brakes have not bean good. I was quite pleased with myself as well, I don't know much about bikes.

Leg pain today when sat again. Doing the exercises that Neal has given me. The new ones seem to be better as he said its not an easy fix and will take time. At least the Pilates have helped  as a lot of the moves are the same as he has given me to do.


Well that's it for this Blog in two parts, to see how it goes with views.

Hope things have started well for all of you and RSD is kind. All the best Love Gill.