As I sit here all I can see is snow. The whole of Britain has bean turned into a Winter Wonderland. 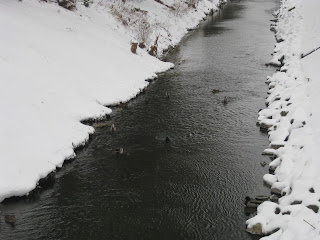 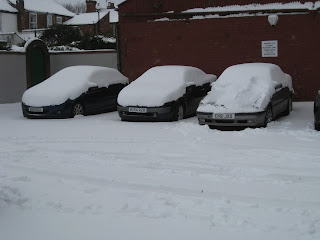 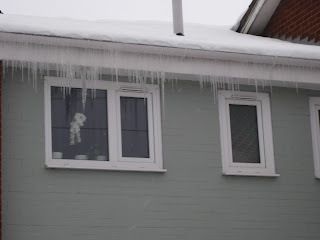 Pictures on our walk we went down the side of the river, Sincil Bank as it is now, home to Lincoln City Football ground.

Greg James attempted to climb three of the highest mountains in the UK and cycle the epic distances between them for BBC Radio 1’s Gregathlon: Pedal to the Peaks. Foiled by the extreme weather on Day 4 of his challenge, he's planning to return to take on Ben Nevis and complete his challenge.

Radio 1 DJ Greg James has been forced to cancel his Sport Relief challenge because conditions were not safe to continue. "I've never felt more gutted about anything", he told Adele Roberts on Radio 1.
Greg had already climbed to the top of Mount Snowdon and Scafell Pike - and had cycled in-between them - but he won't be climbing Ben Nevis on Friday.
"We can't continue this challenge... at the moment.
"That is it for today and that is it for the challenge for this week.
"That means that we can't continue to Ben Nevis.
"We literally can't leave here. We can't get there". 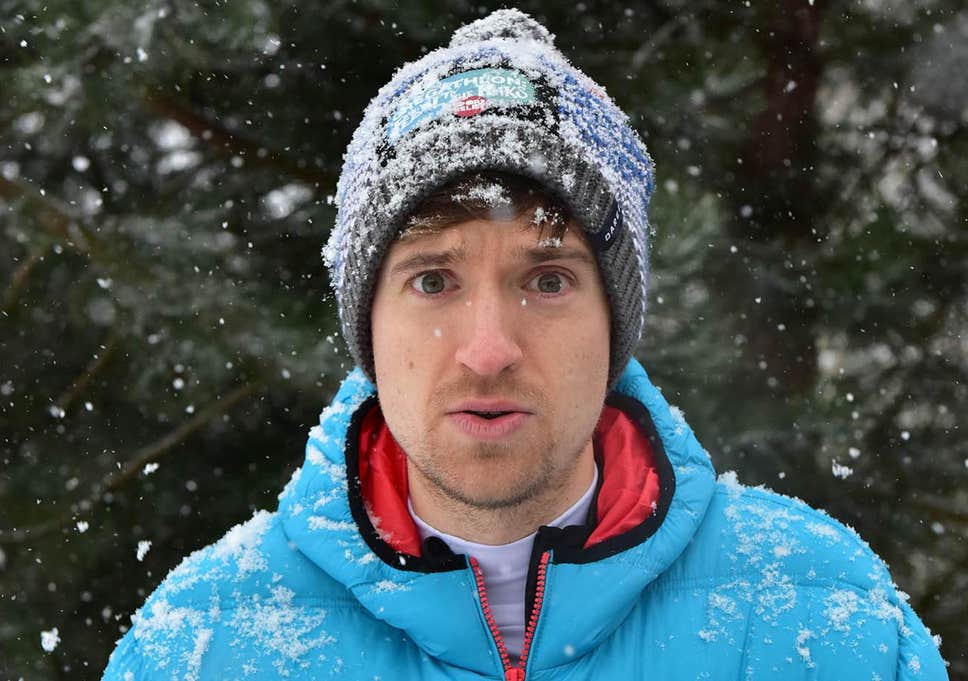 Greg James.
Poor Greg he was in bits so wanted to finish but could not, the worst weather the country has had for years. This week was the the one picked, probably a year ago what bad luck for the team, but he will be back.


I have listen to Radio 1 since it first started in 1967, the DJ was Tony Blackburn, the first record played was "Flowers in the Rain" by The Move. The second was Bee Gees, Massachusetts--  Happy days I was 12 years old and hooked from then. Even now I listen every day. I tell people its the only station my stereo will get. I think I must be one of the oldest listeners

Radio 1 was established in 1967 (along with the more middle of the road BBC Radio 2) as a successor to the BBC Light Programme, which had broadcast popular music and other entertainment since 1945. Radio 1 was conceived as a direct response to the popularity of offshore pirate radio stations such as Radio Caroline and Radio London, which had been outlawed by Act of Parliament.[7] Radio 1 was launched at 6:55 am on Saturday 30 September 1967.
Broadcasts were on 247 metres (1215 kHz) medium wave, using a network of transmitters which had carried the Light Programme.[8] Most were of comparatively low power, at less than 50 kilowatts, leading to patchy coverage of the country.
The first disc jockey to broadcast on the new station was Tony Blackburn, whose cheery style, first heard on Radio Caroline and Radio London, won him the prime slot on what became known as the "Radio 1 Breakfast Show". The first words on Radio 1 – after a countdown by the Controller of Radios 1 and 2, Robin Scott, and a jingle, recorded at PAMS in Dallas, Texas, beginning "The voice of Radio 1" – were:[citation needed]


And, good morning everyone. Welcome to the exciting new sound of Radio 1.

This was the first use of US-style jingles on BBC radio, but the style was familiar to listeners who were acquainted with Blackburn and other DJs from their days on pirate radio. The reason jingles from PAMS were used was that the Musicians' Union would not agree to a single fee for the singers and musicians if the jingles were made "in-house" by the BBC; they wanted repeat fees each time one was played.
The first music to be heard on the station was "Theme One", specially composed for the launch by George Martin. It was followed by an extract from "Beefeaters" by Johnny Dankworth.[9] The first complete record played on Radio 1 was "Flowers in the Rain" by The Move. The second single was "Massachusetts" by The Bee Gees. The breakfast show remains the most prized slot in the Radio 1 schedule, with every change of breakfast show presenter exciting considerable media interest.[10]
The initial rota of staff included John Peel and a gaggle of others, some transferred from pirate stations, such as Keith Skues, Ed Stewart, Mike Raven, David Ryder, Jim Fisher, Jimmy Young, Dave Cash, Kenny Everett, Simon Dee, Terry Wogan, Duncan Johnson, Doug Crawford, Tommy Vance, Chris Denning, Emperor Rosko, Pete Murray, and Bob Holness. Many of the most popular pirate radio voices, such as Simon Dee, had only a one-hour slot per week ("Midday Spin.")[11]

No Age UK today it has bean shut due to the snow.

The paths are still thick with the snow and Summer loves it, we have bean on the common every day.

Very tired today I think this is the effects of the DIAZEPAM I feel like my head is not conecting with my body. Very lighted headed as well.

Bit of snow over night but this has not affected anything more.

Made some cakes with a chocolates liqueurs in, the idea was that they melted and caused like a volcano inside the cake. This did not really happen but they were still good. 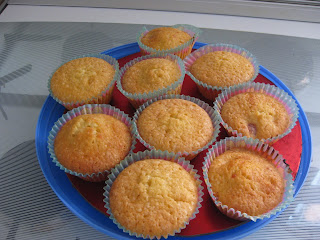 Next time maybe chocolate buttons or something softer maybe a Rolo. Raining today so the snow is beginning to go.

Jay-Jay and friends came round to see me in the afternoon. I like them coming round as its like when my children were all young and bringing their friends round. Some days quite a few of them. I came back from a fell run once and there were 12 or more pairs of shoes in the hall way. All gone by six I said and they were. Again more Happy Days.

Jay-Jay's Birthday on Tuesday so I did this for him. 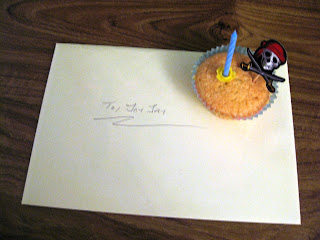 He ate it while he was here and said it was good.

More over night rain has caused most of the snow to disappear. 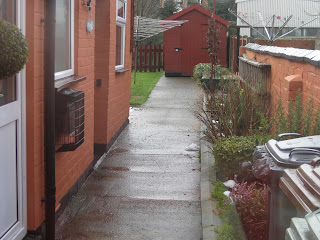 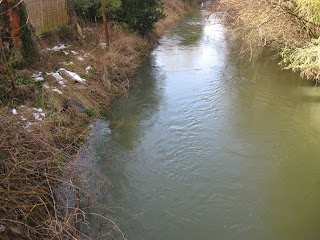 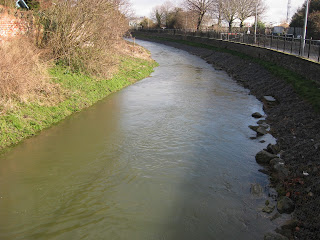 River looking both ways this has risen a lot. 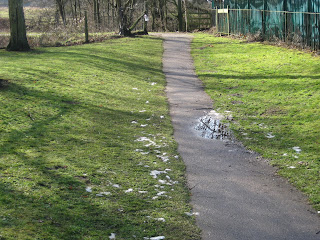 On the way to the common. 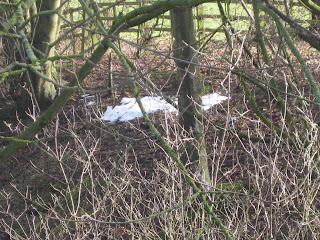 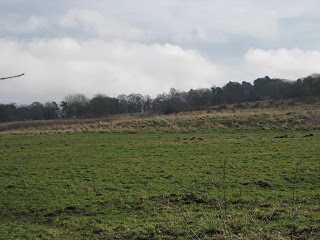 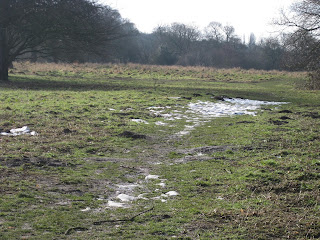 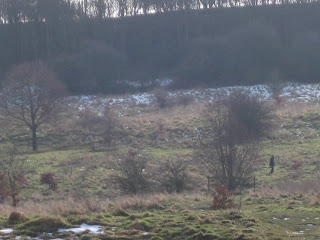 Still a little bit of snow, but I think that will be gone by night time as the sun is out and its quite warm.

Angela came round as we are hopefully going to see "Finding your feet", at the pictures tomorrow afternoon.

Pictures was very good sad at times and funny as well. I did not enjoy it as much as I should have because of the pain and spasms. Sometimes I just have to grin and bear it.

My friend Jenny from Age UK is quite ill and has a very bad chest infection. Hope you get better soon Jenny.

Side affects of the DIAZEPAM are not good still a lot of muscle pain and tightest. I feel like I need help but where from?

No Pilate's today just not up to it. Far away feeling and headache. I was told they might help me sleep. NO they have not. I think I have reached the state of exhaustion.

On our walk Summer and I saw three squirrels playing and running around, so cute they looked just like little kittens playing.

Age UK. I did go but it was a last minute decision. Worked with Ian who I have bean with before. We work well together. Not too busy so that was good. Ian did most of the Cappuccino and latte drinks so my wrists were not in pain. A fair day bit of shopping later then home.

Today while walking this morning, we saw three Robins I think that is quite unusual. Lindsay came round and brought me Mothers Day presents and cards from her Ben, Jay-Jay, Tommy-Lee and Jamie-Lee. I looked after Jamie while Lindsay went into town with Tracy.

Jamie and I played with the little dolls and Summer was joining in as well. A nice afternoon.

Night time nerve pain shooting up from my spine going down my legs and shooting up my arms. The pain was very bad. This made me feel sick as well. 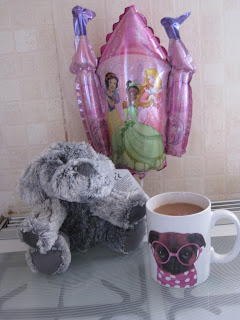 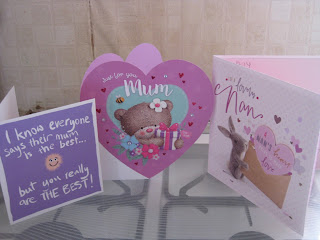 I went to see my Mum and put two plants on the plot. Wish I was giving them to her in person. They say time heals, I don't think so. Things I would like to tell her and talk about. She was not just my Mum but a friend as well.

Jay-jay came round in the afternoon with four friends and stayed for a while. Andrew was in the kitchen preparing the meal so I was not able to go in there.

Andrew cooked an all fresh ingredients vegetarian meal for Paul and I and himself. The starter was Carrot and Coriander Soup. The main was Tomato and Broccoli Bake with Fondant Potatoes and Basil Pesto. Dessert was Cinnamon Banana Bread Pudding with Vanilla Custard and it was really good. And Summer licked out the pudding dish. Absolutely beautiful many thanks Andrew from both of us and Summer. 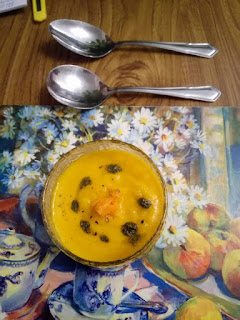 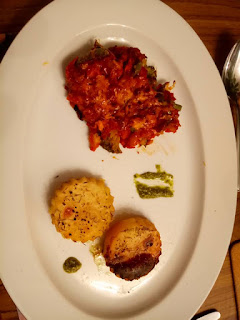 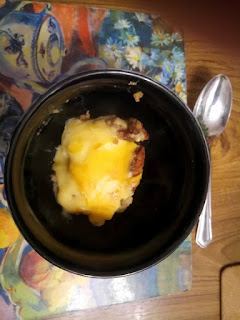 
Summer at the vets today for the Booster and check up. The Vet was very pleased with her. He said She was one in a Million dog. I was very lucky to get one like her. She chose us when she was tiny Pup. 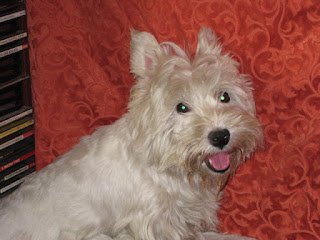 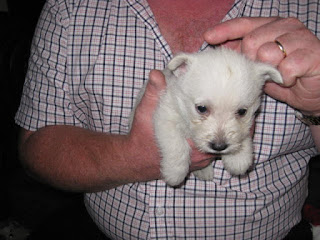 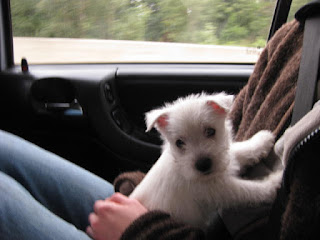 Coming home on Andrews knee in the car. 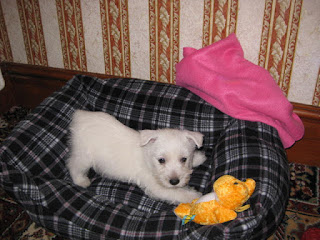 In her new basket 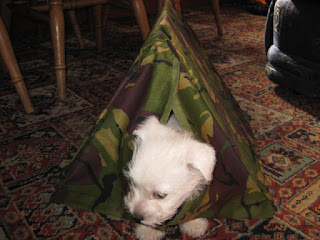 Camping in a Action man tent. 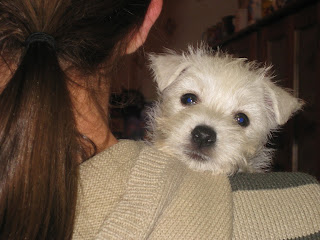 On Andrews shoulder I think one of the best pictures we have of her as a Pup. 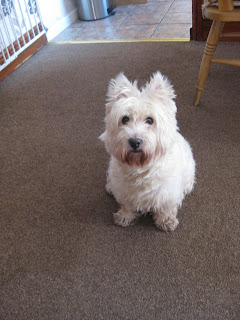 ONE IN A MILLION THAT'S ME.

This was because she has no skin or ear problems or any other things to do with the conditions that Westies get. Her weight was good as well she had actually lost a bit the vet said she had good muscle tone as well. The vet said she was a perfect dog and if she had pups they would be very much in demand. I knew she was a good girl and she's all mine. I forgot to take her injection card so will take it in while I am at Pilate's, as its very near by.

Pilate's--very strong wind going.  The session was not good for me as the pain was bad loads of spasms. I took 400 IBRUES be for and after the session to see if this would help I think it did a bit but not as much as it should have. Also after as well, this is about the same as any one with out chronic pain would take in one day. This was around two hours.

Going home called in at the vets to get Summers book updated.

Well not the best of months for me hopefully things will improve. All the best to you all love Gill.