Looks like we have an extra one staying here for a while, Jay-Jay will be stopping for around a week or two, while his room at his Dads is being sorted out. Our house in the last few months has gone from two plus Summer to now four of us, and of course Summer is not going anywhere.

Jay-Jay's dad brought all his things round and there was a lot, plus some money for his stay here. He will be staying in the room he was in before. Trouble is, that is my sewing room plus handicraft storage, so I have had to move a lot of things again. With Andrew being here as well the house is filling up fast.

Age UK quite busy but with an extra hand in the kitchen things went very well. A work experience lad has bean there all week. Doing a good job as well by what people were saying. I know he made my bit easier, Kieren was there as well so he did all the coffee machine drinks as well.

Greg James has now got back in the saddle to complete his challenge. 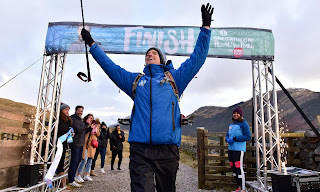 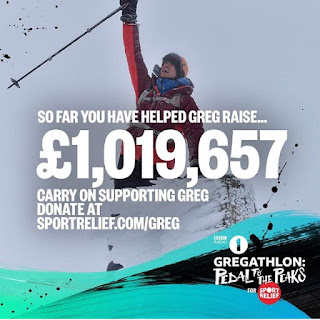 A joyful Greg as he has gone and done it--look how much has bean raised for mental health. Well done Greg. He said it was very cold at the top of Ben Nevis another weather front from Russia is on the way so I think he has just got it all done in time.

Snow falling at times and drifting too, very cold. This is the second batch from Russia like we had before. I spoke to Wayne, he has had snow as well and bitter cold too he said.

Took Jay-Jay in to town to get shoes and hair cut. Met Tommy-Lee (Jay-Jay's brother) on the way and after ringing his mum (Lindsay) he came with us and got his hair cut too. Jay-Jay got his shoes and he went off to meet his friends. Very cold in town, Tommy-Lee and I got caught in a snow storm and it was right in our faces we got covered. The sun kept coming out and the snow soon went. I think there will be more coming over night.

A lot of snow has fallen over night as I thought, drifted in places, so deep in some and not in others. Summer loved her walk and was running around and going crazy. Icy cold wind but sunny as well at times. 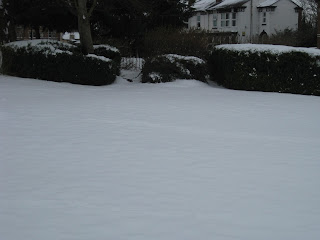 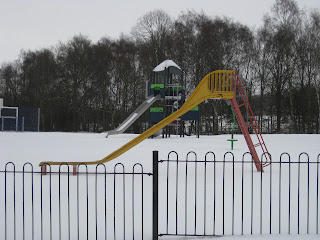 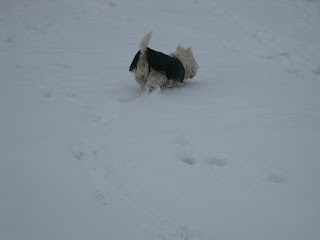 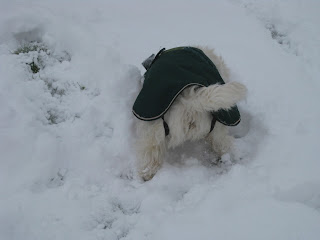 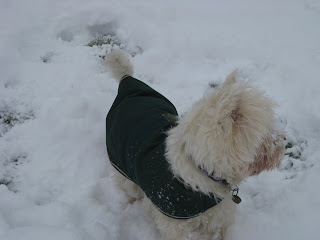 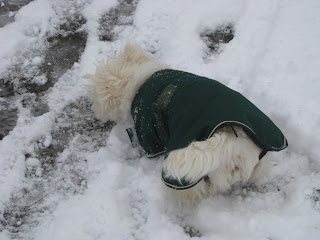 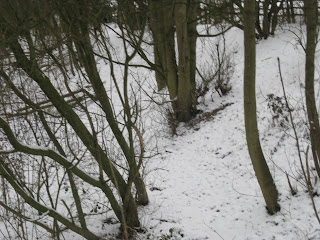 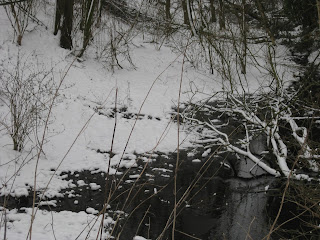 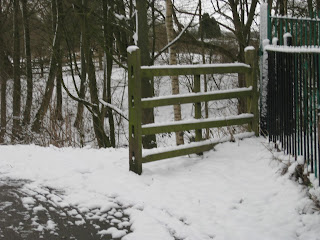 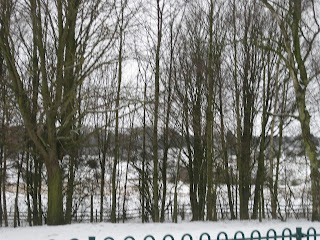 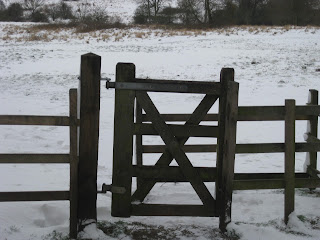 Pictures from mine and Summers walk. 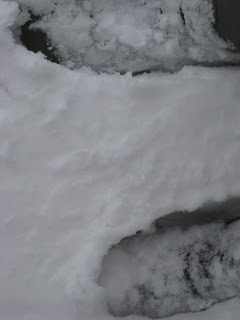 My boots as you can see not as much snow as last time. 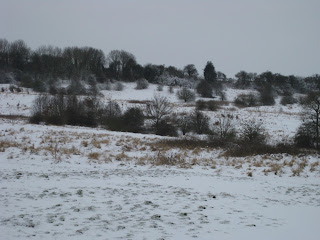 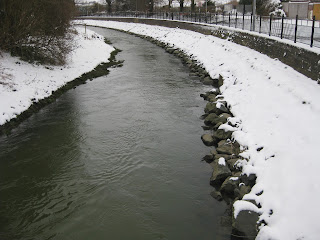 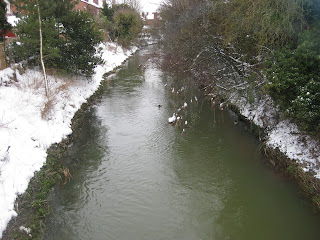 View along the river bank. 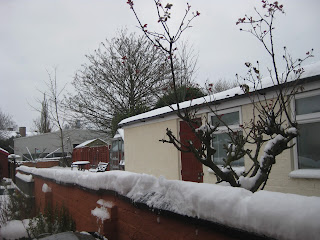 Outside view from window.

Made some cakes again with chocolate in them like before, the little sponge cakes. I put mint sticks and Rollo's in them this time. Hopefully they will work out a bit better than the last ones. The last batch was good but the chocolate did not melt.

Cooked tea for all of us sausage, mashed tatties and roast, Yorkshires and carrots, Andrew had his veggie fingers plus the other bits. The sausages were very tasty. I do not eat a lot of meat and only usually have just one but today I had two and I was pleased I did as they were so good. Cakes I made not bad but still room for improvement.

Meeting at Jay-Jay's School today with Lindsay and Jay-Jay, a few positives and hopefully solutions. Since Jay-Jay is here  living, we are responsible for him so that's why we were invited to the meeting. Hopefully things will improve for him and he will get back on track. His behaviour has not bean the best but, he has bean diagnosed with ADHD and OSD. This has bean going on for a while, but things move very slowly with Schools and Doctors .

Another meeting this time for me at Nottingham to access to see if I can still get disability payments. This has all changed now and gone on to Personal Independence Payment (PIP). The lady seemed positive I would still get some payment but its not her decision. I know it helps a lot with the things I have to pay for like Pilate's, Acupuncture. I am hoping soon to start going in a spa pool. All at extra cost to me. The National Health do not pay for things like this. I have said once before in a Blog that in many other situations I could get more help but NO, not for this RSD. Makes me mad at times.

I have stopped taking DIAZEPAM too many bad side affects.

All the snow that had fallen has now gone. Is this the last to come now?

Not at Pilate's today not feeling too good, got a sore raspy throat and full RSD pain. I tried to keep busy with rests in between. Going hot and cold all day sweating like crazy. Feeling very tired but not able to sleep.

B12 today god did this hurt-- sent a nerve pain straight down my arm to my fingers. Carried on into town to get a few bits. The pain went after a while back to normal RSD pain. Still not feeling the best now a cough to put up with and tight chest.

When I got back Angela was here for a chat and a drink.

Age UK. Jenny still ill so most of the time on my own with a bit of help from the kitchen staff. A busy day and very tired when I left. Not sure how long I will be able to keep doing this as hands are getting worse and dropping things all the time. I will go as long as I can, as I enjoy it a lot. I like the older ones that come here for their drinks and meals, a lot of them are very funny. Some as you know are not funny or nice but thankfully those are few. Since stopping DIAZEPAM I have felt a lot better

Clocks back last night so an hour less in bed. Did some of the garden, general tidy and cut back a lot of the dead bits. Sorted out the greenhouse ready for the tomato and plant seeds. A lovely Spring like day and quite warm as well.

Finished off the garden looks very tidy now and bare. A frosty start to the day as well quite cold after yesterday. Only Britain can you get so much changeable weather, probably a few other places as well.
I know Amsterdam is very much like here as well, but with more rain.

Jay-Jay is moving back with his Dad now so came round for all his things. Seemed a lot less from when he came. Better packed in boxes I think.

Waking today with Pup we saw three squirrels, a robin and a pheasant. A mile from town and we get all this more than some who live in the country.

Pilate's today went okay but still hard for a lot of the moves. Jo did this new one where you lifted up one hip and stuck out the opposite leg. Not hard to do, but very effective. I asked her if this was HIP HOP, everyone laughed. Rained coming home and was very cold with head wind most of the way.

Angela called round as her car was in the garage near by getting some work done.

No Age UK--  closed today and Monday. Went with Angela to see Miriam a friend,  her Birthday is tomorrow and she's eighty three years old. Took her a card and flowers. Angela took her cardigans. She was pleased to see us both. She has bean in a home since the beginning of December but hopes to go home again on the 9th of April. The home have bean very slow setting up some help for her. So she has to pay for the privilege of staying there, plus her rent on her cottage. As most know homes are not cheap.

Got the washing dried outside but the wash line broke, I was able to mend it but its the size for a midget now. (its a whirley gig one) On to Angela's for a while, nice to see her cat again. A good afternoon just talking and drinking tea, she then brought me home. Got the ironing done before Wayne got here.

Wayne's here for the weekend. At teatime we had a small Chinese, very tasty it was too. A good night just catching up with things and chatting.

Looking after a neighbour's two cats for a few days. They are very cute, one tabby stripe and one fluffy black.

Did some machine sewing for Angela.

Lindsay called in and had dinner with us. So did Jay-Jay and a few mates. Ten of us today, I was cooking chip for ages. Anyway everyone fed and watered and full.  Paul gave Lindsay and the children a lift home as he was going that way. Jay-Jay and his friends still here for a while then peace.

Summer at last has given up her old ball she uses on the common. I tried a few weeks ago but she would not chase after her new ball. This has happened before, she does not like change. I wrapped her old ball or what was left of it around her new one for a few days. Then she excepted it and I was able to throw the old ball away. Even then she saw me putting it in the bin and I think she knew it had gone for good. 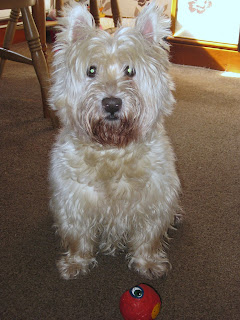 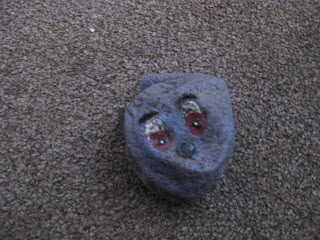 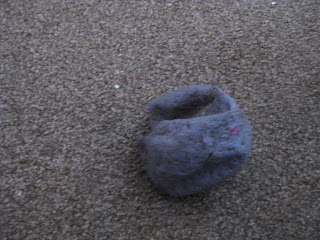 Old ball or what left of it.

Just realised this is my 200th blog, all started on 13th July  2004.
Well that's another month gone by. A bit better one for me I think, not as much pain. Hope things are as good for you all. See you next month......Love Gill.