Very tired today, I think its after being at Wayne's the last two days. Paul usually goes on his own to see him as it can mean a lot of pain for me. I cleaned the computer chair that Wayne kindly let us have looks good. Knee still sore but calmed down a bit, so it should with all the painkillers I have taken.

Age UK quite a bit busier than last week.

One of Andrews friends Chris (he has stayed before) is staying the night or two.

Lindsay and Jamie-Lee came round. Jay-Jay and Tommy Lee were out somewhere.
Lindsay cooked dinner after I prepared it all.
Later Jamie-Lee and I went to the park. She met a friend there from school. A nice afternoon for her running around with her friend. She took her pram and baby Annabel with her. A little boy borrowed the pram and baby, he had a very good time looking after her. He was not so keen to give Jamie-Lee the pram back. After a while we headed back home.

I am looking after Tabby cat while his owners are on holiday. Feeding him and cuddling him he purrs very loud. His cry is also loud especially when he sees me getting his food.

Another sunny day and windy too. Perfect for washing.

Angela popped round for a chat after she had finished work. We talked about the Holiday in September in the Lake District.  Paul, Angela, and I too are really looking forward to a break. I think we all need it.

Cleaning most of the day Joy came round for tea and a chat. She looks very well now and I think she is on the up.

Knee still not good locking up, and if I just slightly twist it while walking it shoots a pain from the knee cap down or up my leg. Feel a bit like my knee cap is tight or moved. Appointment next week at the Doctors.

Pilate's I decided to go this week, another warm day. Knee was not too bad biking, but it's electric so a lot easier. Cool breeze going nice but a bit chilly for me. There were road works but not a thing going on when I finally got out the standing traffic. I carried on and just near the Spar shop, a lady did a three point turn, not looking at all. More interested in her friends at the shop. She just missed knocking me off my bike. As I went past her she put up her hand up and smiled. I just put my arms up in in disbelief. If I had not bean looking I would not be here probably squashed.

Pilate's was a good session but I only did what I could. The ride home was uneventful but knee sore. Some times I think there must be a force or something stopping me going to Pilate's

Lindsay was here with Jamie-Lee when I got back. She had brought with her the paddling pool.. The weather was a bit cooler so we delayed getting the pool set up. Jamie was moaning to go in it. Later Jamie Lee did go in and played for a while. Summer loves children being here. She plays and runs around following Jamie-Lee all the time. She will be very tired later and tomorrow.

My younger brother, David, called round. It's his 60th birthday tomorrow. So he picked up his present and card. He is going to do our patio later on in the year.

Age UK bean a bit of a problem, the rules have changed and people are not happy. We do not now get a meal after our shift unless we pay, 10% off WOW. A meeting was called after we got a very sharp, almost rude letter. Again with the meeting no communication again, we were not even told by the volunteers co-ordinator that there was a meeting today. No poster, nothing said. Word of mouth for most. I said at the meeting that there is a lack of communication from you lot. The boss being the worst, very rude she is. Anyway things were sort of put right, but I think a lot of volunteer's will leave.

My knee is extremely painful today. Lots of extra tablets far too many, they don't seem to work as well as they used to, or is the pain getting worse? I have a Doctors appointment on Tuesday so hopefully will know then what is going on with the knee. My Doctor looked at my knee last time but was not sure what the problem was. Since then it has got much worse. Walking does not help but going on the bus is worse because of the vibrations. People do not understand this and think there is nothing wrong with my knee or the rest of me. In some ways I can't blame them as its not easy, even for me to under stand whats going on.

By the time I left the Age UK it was nearly three o'clock. After doing a bit of shopping I finally got home around five o'clock. Some had bean there since eight thirty.

Ness and Ben came round to give me a present from all of them for looking after Tabby cat. 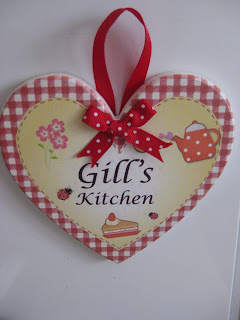 Ben asked if he could come on Summers walks with me. I said yes course you can so tomorrow he will be joining Summer and I.


Jenny (Age UK.) asked me to sort out a pair of trousers for her by taking up the hem. The first leg went well the second for some reason did not. Looked why, then realised the original hem was not straight. So I had to re do them but got there in the end.

Angela has had a good report from her Doctor as she was very worried as she thought it would be bad news after having some tests done last week. I gave her an early birthday present of a Halcyon first series DVD, as it is on television but she can not watch as its on too late. This is the second time it has bean on she loves it.


She bought me some flowers. Thank you very much Angela. 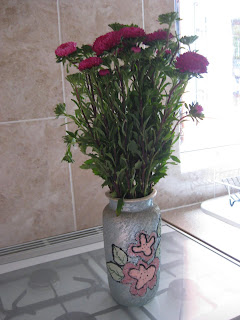 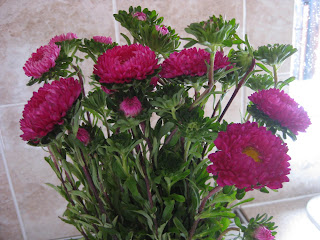 Paul has had a bad back but is much improved now. He is able to move around more. He had a trapped sciatic nerve.

A very wet start to the day. I forgot all about calling for Ben when I got back to our front door he was waiting outside for me. I said to him I totally forgot sorry. He said never mind. I said it does, come on we will take Summer a bit further. We went down Sincil Bank and Summer and Ben were happy.

Terrible head pain later so bad I thought my head would actually blow off. This was to do with the storm we had later. A lot of hip pain but I think that's more the way I have bean walking to protect my knee.

Early Doctors appointment 9.20- he looked at my knee and agreed it was very swollen, not sure what is causing it, but its very inflamed. He is organising a scan hopefully it will not be too long. He does not think its the RSD spread, I don't as the pain is wrong but at one time it did cross my mind.

Went round to get Ben, this time we went on the common I showed him the sand pit and the under ground stream. He enjoyed the walk a lot, so did Summer. He met a few of Summer friends too. I think she was showing off as she kept running around them.

Pictures to see "Mamma Mia 2 here we go again" When we got in the pictures for the 2-30pm showing, we thought it was weird that there was no adverts on the screen. An odeon worker announced that this showing would not go ahead. We were told that the bulb had blown and as its a specialist job to fit another. They said it would be ready for the next showing 5-30pm. Refunds would be given or another film either today or another time. We chose to come back for the 5-30pm one today. Angela got a refund for the film and we did not have to pay for the 5.30 one. We were both shocked and pleased. The film was very good and we both enjoyed it a lot. Lots of old Abba songs. Angela dropped me off at home and went to feed her cat.

Pilate's- hopefully my knee will be alright as I have the bike ride first. Very windy going and cooler. The Pilate's session, yes things went OK but a lot of pain in my knee and shoulders coming home
Very tired later.

Walk on our own to day as there was no answer when I knocked on Ben's door. Paul sent his Mum (Ness) a message and we agreed to go again later. Lindsay went home and soon Ben arrived to take Summer out. A good walk on the common with Summer running around. She will sleep well again to night.


Well that's it for this Blog. Hope you are as well as you can be and had a lot of this real summer sun.

All the best to you love Gill.

Pictures I  took of the cat over the road early this morning- he is sitting on a car bonnet. His name is  Smudge, I am looking after him and his mate Cowley (named after Lincoln City football manager) in September for a week. 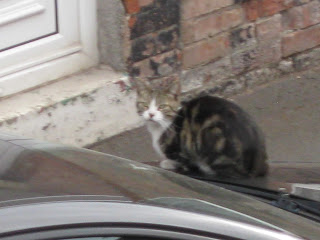 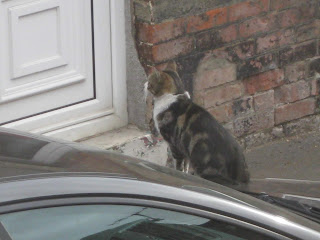 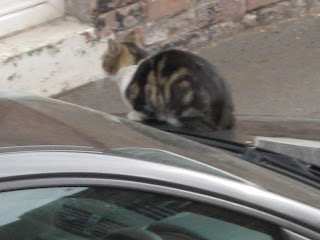