Checked my batteries on my scooter and found they were not charging up as they should. Even though at the moment I don't use it too much I keep it topped up. The scooter was bought in 2006 so I think the batteries have had it. Hope new ones are not too much money as spent quite a lot just lately.
I will look in to it when I need it more.

Paul and I are having a day out at Cleethorpes a seaside town. The journey was good for me. I don't get as much pain while travelling in the car now on a good day. We walked down to the sea soon after we arrived. They was not much sand to see as the sea was well in land. This was around 11-30am. 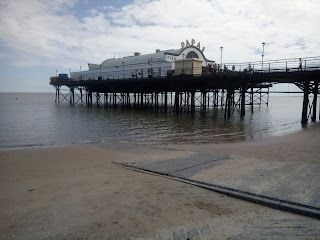 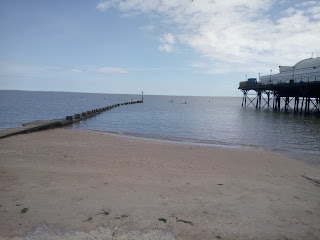 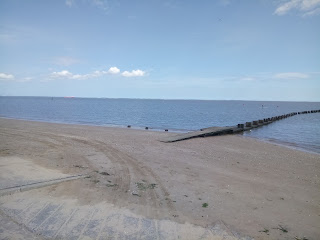 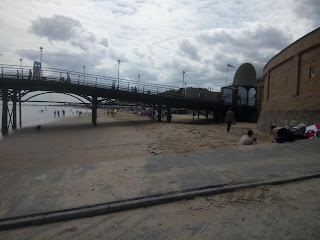 We went round the shops and had dinner fish and chips of course, LARGE PORTIONS too. 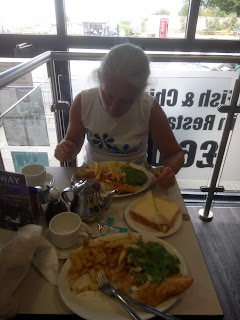 After a while we had another look at the sea what a difference the sea had gone out and we could hardly see it. 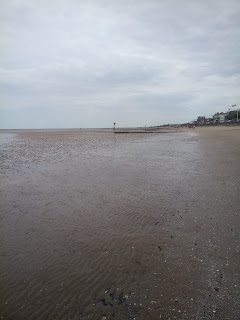 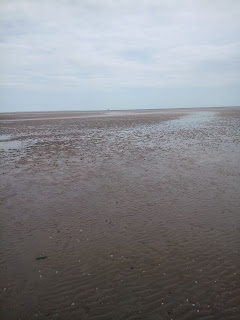 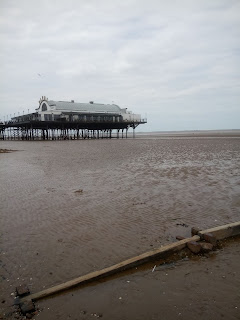 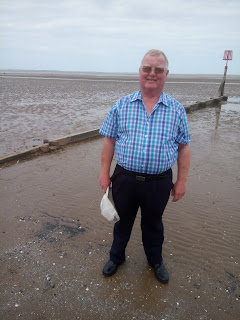 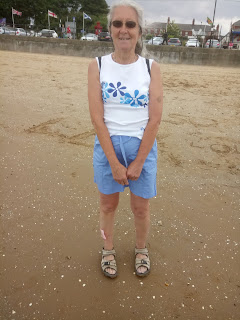 Paul and I on the beach a bit windy.

Later Paul had an ice cream, but I was still too full from dinner. The day was very warm but with the usual sea breeze. We decide it was time for home and Summer. We had got her a chew so she would be happy. Cleethorpes is no where as big a place as Skegness or Mablethorpe but I like it at times because its quieter. Going home was good as well not too much pain. A good day out the first for me since February when we all went to Mablethorpe for my Birthday..

Another fine day warm and breezy. We have bought a new carpet cleaner as the last one is about had it. We got a bargain too reduced from £250 to £169. Paul used it on the stairs and hallway and said it was very good. The carpets were dry in around an hour and it smelt nice too. With having Summer the house can get a bit of a doggy smell at times. Most of the time we have the back door open so its better but in the winter it can be a Summer smell.

Andrew is back today from Amsterdam after a few problems he arrived here around 1-30 am (20th).
Paul had picked him up. He was tired so was Paul but Andrew had a good time catching up with few people. Most of the time spent there was work related.

Age UK Jenny is not here today as she has not bean well all week. I spoke to her and  she says she should be back next week. I was not on the counter much today but doing various easy things, a bit of washing up. stocking up and general bits. A nice steady day but I did have an exploding Pepsi can. I took it out the storage cupboard with some others, and this one exploded in my hand. I dropped it and the spray went everywhere, walls, radiator in the cupboard and all up my leg, skirt and shirt.
Garry helped me clean up. He said the same thing happened to him a few days ago.
No more events for the rest of the day. The cafe was not busy so an easy day for everyone.

Bit of shopping then home. My knee is still playing up and can be painful at times even giving way as well.

My leg is a lot better now. the dressing from the nurse have certainly worked very well. 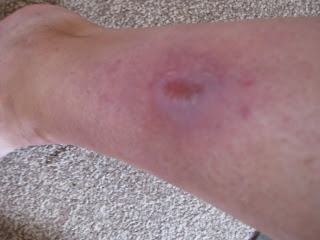 Picture of my leg still a bit sore but hell of a lot better took nearly three weeks though as I did it on the 3rd July.


Picked my first cucumber today and the one and only radish. 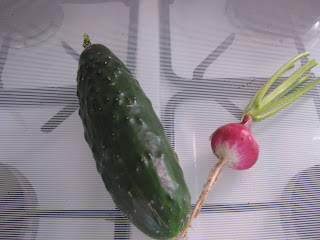 My first one this year there are a lot more to come but the Tomatoes are not doing the best very slow to get going.

Very warm again but with clouds.
Cleaning upstairs and its making me sweat a lot. There seems to be no air and the breeze is warm as well. Having to stop a lot of time just to calm down a bit and cool off.

My left foot, well my little toe that is, started hurting later on. The pain was like when I first got RSD. Despite taking a lot of tablets the pain would not go. Even when I went to bed around 4-30am the pain was still as strong.

Another very hot and humid day. The storms that were promised did not arrive so still the air is hot. Thursday is meant to be even hotter.

Lindsay is here with Jamie-Lee and Jay-Jay. Her freezer has broken down and she has found another one but just needs to get it. I said I will have Jamie for a while. I gave her the pram and doll that I have had for ages. The doll is a Baby Annabelle, a bargain buy from a charity shop. I think it was four pounds. The pram someone was getting rid of so I had it, and cleaned it up. She loved it and played with it most of the time changing her clothes and feeding her.

Jay Jay was BB gun shooting, making animals with balloons with  Jamie-Lee and a few other things. Lindsay came and picked them both up.

Pilate's was hard for me today as my knee is hurting a lot. The ride on my bike was very nice as a cool breeze blowing. Lost my key for the my bike. Jo gave me a hand to look for it. I had it when I went as its work the electrics, so I knew it was either in the hall or my bag, wrong it was hidden outside in the shrubs. We found it and I was soon on my way home very cool again but pain in my knee swollen more than it was.

Later my sore leg really started hurting. I pressed round it and a load of gunk and very dark blood shot out, a lot of the swelling went down and it stopped hurting as much.

Going to my friend Joys today, it bean quite a while too since I was last there. I walked in to town then got a bus the rest of the way around a mile..We sat outside and chatted, had some sandwiches and tea. Very nice too, good company good food. When it was time to go I stepped out her front door and the heat was like an oven. I went back on the bus, this was hot I had not bean on long when a very sharp shower came down. Most people did not notice as they were on their phones. When they did look up probably after getting drips from the open bus window, they were so surprised that the rain was coming down fast. The shower did not last long and the sun came out again and was very hot. I also caught a bus home again around another mile. Big mistake the bus was full with people with around fifteen standing, in the end. I got a seat with getting on at the station. I was so pleased to get off. I know why I don't usually use buses now. I thought I  had lost my bus pass but I had put it in another part of my bag so all good. I thought typical the first time I use it for ages then I had lost it.

Bit of a storm later that grumbled though out the night.

The air is still hot though even after the storm last night..

Age UK about the same as last week steady but not over busy, nice, I like it like this. Very hot  in the kitchen and behind the counter.

Out for a meal today with friends. I had roast beef and all the bits, Paul had the same.. Nice meal but had to be re heated as it was not very hot. I had a pudding, strawberry and ice cream sundae, very cold but nice. Made my head hurt quite a bit.

Today  Paul and I are travelling to Halifax as it Wayne's Birthday. Happy Birthday Wayne. Staying the night. Hopefully I will cope as my left knee at the moment is very sore and stiff.
The journey was not too bad but still pain. I have a very painful cold sore on my bottom lip.
Gave Wayne his cards and presents. We have not got him much, as we hope to get him a new patio set tomorrow.

We went out for an Indian meal in Bradford at a place called the Aagrah Pudsey Kashmiri, very nice too, some of the dishes were a bit fiery. We all enjoyed it very much. 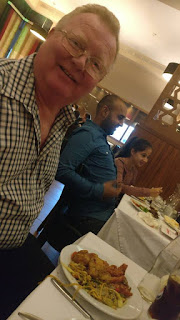 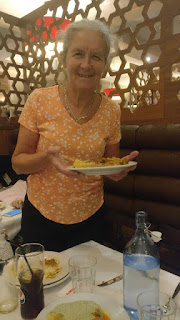 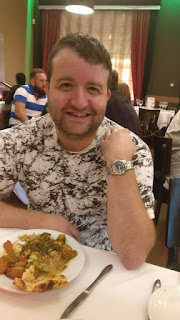 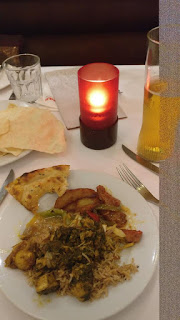 Some of the food we had.

Not a good night for me not a lot of sleep even less than usual. I think the curry's had made me hot and also a different bed.

Bad head, the same as I have had before, pain in the eye and soft spongy head. Took one of the CARBAMAZEPINE tablets and it helped take the worst pain off..

Going to try to get Wayne a patio set in Halifax, after looking round we got a very nice set for him just what he wanted well pleased. 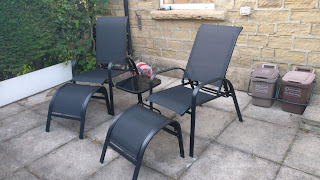 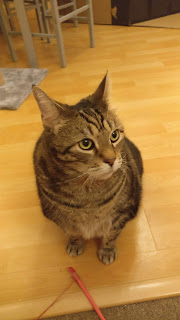 Wayne's cat Timmy. He had the big box that the patio set came in, he loves boxes. 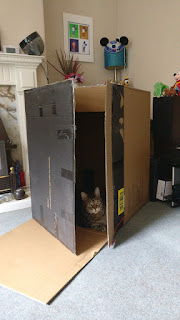 Back home to his house in a lot of pain, popping pills like smarties.
Paul put together the patio set. I cooked tea then around 9-00pm we headed home arriving around 11-15pm. A painful but good day. Good to see Wayne and Timmy Cat.

Well again a bit mixed month end. I was pleased I was able to travel to see Wayne as most of the time it is not possible because of pain. I know I still had a lot but was able to still enjoy the stay and see them both.

Hope things are good with you all and are enjoying the still hot weather All the best love Gill.