What a lovely day suns out, cold wind but that hopefully will help my headache. I got up a bit later, 10-00am today as bed late last night, well early morning to be right around 6-00am.
Good walk with Pup, the wind seems to make her like a young Pup again. She is 8 now after her Birthday in August. Washing nearly blowing off the line as the wind so strong.

Knee (the one I hit on the cupboard door) is not good today, it's very painful and giving way at times, bruising has all come out now I think, but still quite swollen. The original knee pain is very bad today and causing me a lot of extra pain. Extra tablets and BIOFREEZE plus TIGER BALM to help, it does a bit but not for long once the numbing affect has gone off..

I'm at the Doctors today, a few problems for her to sort out. My nose has bean bleeding a lot and is very swollen inside. This is an ongoing problem from a few years back when my nose was cautorised after massive nose bleeds. My nose now is very fragile and will bleed at the slightest sore or cold. I asked her about my scan I had on my knee on the 30th August. She looked but they're not back yet. She will chase them up, I will ring after the weekend. I have ECZEMA on both hands so cream for that, BETNOVATE, plus more cream for my nose NASEPTIN. The Doctor has put CARBAMAZEPINE on repeat prescription. This tablet one a day, has helped my neck and head pain a lot. I still have shooting pain and soft tender spots, but nowhere near as much. At least that's one thing that has helped.
She looked at my knee as bruising has gone all the way down my leg and I only hit my knee. She said this was fine as its called tracking, but to come back if it gets more swollen or very hot. I said it was hot a few days ago but cooler now. I think she was happy with it anyway.

A dull cold start to the day. I was going to Pilates but I don't think my knee could take it so stayed at home. Neck and head pain not good today may be I should not have said how good it was yesterday
A lot of ironing to do today so a good CD or two on to move to. Chose Ozzy and Pink.

On the common today, after Summer had bean playing with her ball she sat down and I did too. My shoulders and legs really hurt. One of my friends saw me and was quite concerned and thought I was not well. She said one minute I was walking along and the next on the floor. Nice to have people looking after me. Summer tired now and will have a asleep for a while.

Age UK The cooks last day so a sad one for us all. Chris is very funny and makes us all laugh and cheers us up with a cuddle when down or just not feeling to good. We will all miss him.

One of the waitresses, Gwen, dropped a dinner plate on her foot so she had to go to A and E. Her foot could be broken or just badly bruised as very swollen and miss shaped. All the best Gwen.

A very stressful day all round as short staffed. Polly the cooks day off too. Gwen at A and E so a waitress down as well. Many more days like this and it will be too much for me as at times I found the noise too much to cope with and just the overall things that needed doing is too much too. Jenny found it quite hard as well. Most people seemed to be annoyed today for some reason. Next week Chris is not here so only three in the kitchen as no one to replace him as yet. The Capochino machine was not switched on either as no one to work it. A very tiring day with not much sleep this week, so that did not help things either.

Bit of shopping then home to rest a bit with Pup she was very pleased to see me.

Playing Scrabble later with Andrew and Hannah. I actually won a game, I'm usually not very good as my spelling is bad.

Lindsay here with Jamie-Lee and Suey, Summer has not seen her since her holiday there when we went to the Lakes. They were both running around like mad dogs. Tommy-Lee and Jay-Jay were out with friends.

Left hip painful, feels like bone on bone this happens from time to time. Took extra pain tablets and rubbed on Tiger Balm. Is this FIBO, RSD or WHAT?

Finished off baby Annabelles pink set and also the pram set, quite pleased with them both the patterns I have used are a very good fit for the doll. 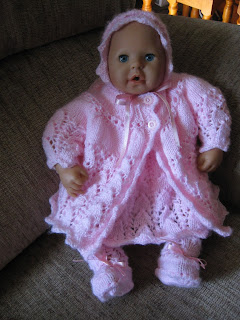 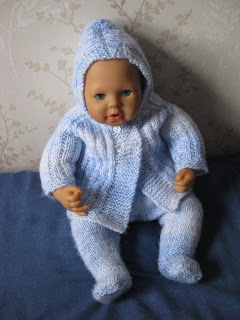 A cold start to the day but dry. There is a bike race on the common so a lot more people are there.  They go fast on their bikes. All ages racing from very young around six or seven + to elderly. Stood watching for a bit. Reminded me of my racing days and running and I felt very sad.

New Doctor Who-- the thirteenth Doctor a LADY this time. I watched it with Andrew and Hannah. Not too sure what to think yet, need a few more episodes to settle in I think.

Hip very sore today especially when I lift my leg. Winter is coming so it will not be good for me I don't think. I will survive, as the song goes.

Phoned up the Doctors to see if scan results have turned up yet. Spoke to my friend there and she said results were back in. Probably bean there the whole time but not in the right place. She made me a phone  appointment for tomorrow.
Later in the day I got a phone call saying I need to make an appointment to see a Doctor. I said already done- don't people speak or look at screens there to see whats going on? Anyway its sorted.
I have a call late tomorrow morning or early afternoon.

Doctor Patterson called me just before 9-00am. !!!. I was asking about scan- she said nothing on my file. She will look in to it. I thought it was all sorted I said. She will ring me later. What a mess around, when I first had the scan, they said a week its bean over five now nearly six (Thursday).
The results are there my receptionist friend has seen them.

The leaves are coming off the trees and a carpet is forming along the paths. I like Autumn, but soon the trees will be bare.
Summer had a good time playing with her ball again on the common and was tired when she came back.

Was not to sure if I was going to Pilate's but in the end I decided to go. The session was hard but I mostly enjoyed it. A lot of spasms in my right foot, I think this was after biking there. Not bean on my bike for a while. The last time was 12th September so legs and feet are bond to feel it.

Later on I had my hair cut by Angela's Hairdresser, Debbie, now shoulder length and layered. This will go curlier as the days go by. 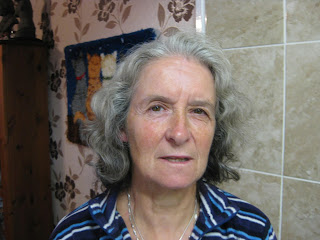 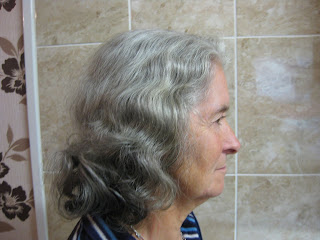 Not half down my back like it was. Feels better but weird- as used to tieing it back. I know its easier to brush now so does not make my arm and shoulder hurt as much. Thank you Angela for introducing and recommending her to me. Bean a long time since my last cut  March 2015 by Helen before she moved to Derby.

Got a phone call from my Doctor about knee. There is a significant tear under the knee cap. I have bean referred on. So hopefully something will be sorted soon.

Age UK. Gwen who dropped a plate on her foot had not broken it, she said it had bean very painful for the last week. Poor Gwen at least she can now walk on it. Found out later in the day she is coming back as cook to replace Chris, I am so pleased about this. She is a very good friend and has her crazy moments and she is a good cook. A lot of the customers have missed her so will get a shock next week when they see her. I think most will be pleased. As they say you can not please everyone.  Please yourself first.

A busy day but easier than last week. My knee hurts a lot so extra tablets and rub.
A bit of shopping then home. Very mild the last few days but oh so windy.

Angela was here when I got back and brought us a bottle of Buck Fizz. That was nice of her.

Decided to bath Summer today as her fur is very mucky and not soft. She quite likes a bath/shower.
After she looked so white and oh so soft. Let her dry natural today as it was so warm. 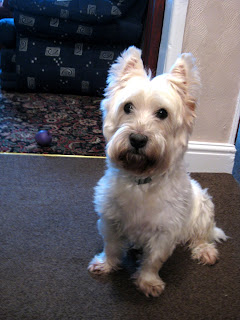 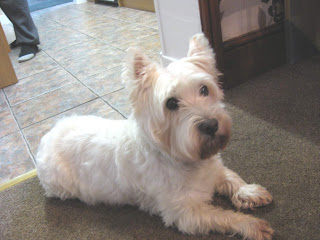 She is so hard to get a picture of because she locks at you all photogenic then at the moment of clicking she moves her head or just walks away.


Later I did some of the garden, the herb bit. Summer was sat outside getting dried. My knee hurt so only managed a bit but pleased with what I got done. There is always another day. At least I got started.

Rain. I think it looks like an all dayer. I would have liked to do more in the garden but never mind.

Summer wanted to go down Sincil Bank today. She sometimes likes to have a change. What I saw down there was lots of water, leaves and mud from the side bank along the road .I think the common would have bean very muddy and sticky today, Summer made the right choice..

Not too much going on this month pleased about scan results. Hope things are the best they can be and you are all well. All the best Love Gill.