Well first day back after the holiday. Washing and ironing done not too much this time to do.
Summer looks a bit sad, probably missing her mates Suey and Zeus. Lindsay said they were running around after one another. Could be she is just tired like me.
Cleaning up downstairs, the house was not too bad, but Andrew has not bean here too much mostly at Hannah's.

Banged my knee on the cupboard opposite the back door, hurt for hours. Swollen and very sore even the right knee hurts as much and I never bumped that one. Only RSD could do that make something hurt that not even bean touched. I banged it on the opposite side though so now the whole knee hurts.

This is the knee I banged that I have bean having problems with. Doctors on Tuesday so should know what the scan says. If this shows up nothing then it's more RSD spread. I hope its not that and the scan reveals something

Paul's Birthday Happy Birthday to you. Lindsay and Tracy came round for tea later, Andrew and Hannah was of course already hear so the six of us had a Chinese. The children did not come as they are on holiday with their dad in Spain.

No Pilate's today don't think my knee would be very happy.

Knee quite bruised, very hot and leg is hard. I hurt a lot today not just my knee all over pain  the annoying type that does not go away.


Made Paul a cake 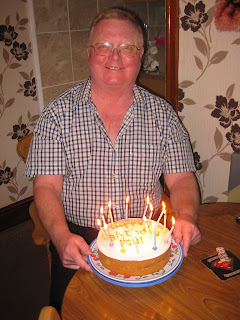 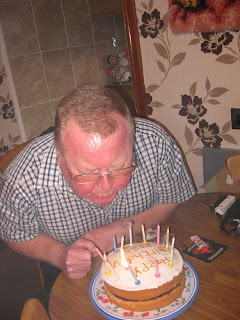 The cake was very nice .


Age UK, nice to be back well I think so. Not too busy so that was good even Vera was behaving and kept out my way in fact she was good with everyone today.
Chris the cook is leaving which is a shame as he likes a laugh and soon cheers you up if down and he gives good cuddles. Only gentle ones for me he says as he does not want to hurt me. Gary the caretaker says if I was squeezed too much I would break. Not sure if that would ever happen but some days it does feel like that.

My knee is swollen and hot still, but not quite as painful, well a different kind of pain.
By the end of the day I know it hurt a lot, I did consider coming home on the bus but, I know the journey would make it worse with the vibrations. Not right is it-- hurts too much to walk but also too much to go on the bus.

I need to see if my very comfy shoes can be repaired but I think it will be a lost cause. Yep just as I thought the mid sole bit has perished, so a no go. Well it was worth a try.. Have to look for some more. With having RSD I need to wear shoes that give a bit, like Velcro fastenings and have a lot of comfort built in.

My dilemma was sorted as Angela came in to Age UK and after getting a few things in town gave me a lift home. A lot smoother ride than the bus or walking. Thank you Angela.

Nice morning a bit chilly though on the common. Summer was running around playing with her ball.
There is a dog that goes on the common that throws the ball for itself  then runs after it. The owner said he started doing this as a pup when no one would play with her. Very clever I think.
Cleaning up today downstairs. Also knitting the baby Annabel's dolls clothes, on the coat now so last bit.

Knee not as bad today so long as I am careful a bit more bruising has come out. 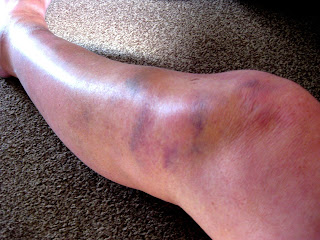 Short but sweet blog this time as already published the first few weeks of September. The weather is changing so the cold is coming. Not RSD's friend to most.
Hope things are going well and you are able to do most what you want. RSD is a way of life for us so we have to make the best of it as there is no alternative. All the best love Gill.