Well operation day--  THE KINGSMILL IN SUTTON IN ASHFIELD there for 11.30. Operation on my knee a MENISCUS TEAR KEY HOLE SURGERY- DAY JOB. The hospital is about hour and half away on a good run. I waited in the day room and was told I would be second going down.
Talking to a very nice junior doctor, he was very interested in my RSD. I gave him my blog details he said he would have a look. A nurse came up to me and said change of plan, you are now going down first, because I have an allergy to latex they did not want to risk anything. She said the air would have to be cleaned or something not too sure what this meant, and this takes twenty minutes to clean. Get ready, ten minutes later I was on my way, very calm, almost looking forward to this as it will be one less pain hopefully.

Arrived in the anaesthetic room (1.30pm) and saw Mr Joby John the surgeon. The theatre nurse said looking at him you need a mask I said no he is operating how will he see. She said the mask is for you laughing. She then said to Mr Joby John here are your  drugs "WHAT"  I said DRUGS. The drugs are for you she said, for him to give you during the operation. Everyone laughed, the nurse said you are very calm. The cannula went in, mask on, injected. The last thing I remember was the theatre doors. I thought to myself, I have never seen live in the theatre, I still did not, I was gone.

This is where things went a bit wrong. I started to have SEIZURES after the operation in recovery forty five minutes in all, one going in to another. (I found out later) I was in the recovery room a long time. Paul rang up and they said I was still in there five or six hours later. I was not going home today. I was taken to a ward and had another set of SEIZURES. The next thing I remember clearly was Thursday morning in pain and the usual feeling of having SEIZURES. Not sure where I was. A lady said I got to the ward around 8-00pm.

I was told a bit what happen, on drips, SALINE and PLASMA not feeling too good, exhausted. Big bandage on my knee more for protection than the wound. 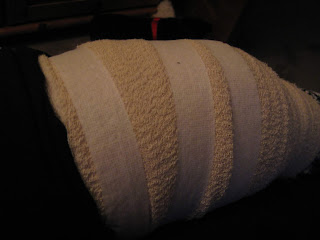 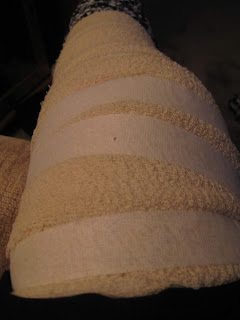 Bandage on my knee with dressing under neath.
(This was redressed as it slipped down when I got home.)


The physios came to see if I could walk on my crutches, these were give to me before the operation in the day room. I could not walk, shaking like a jelly and in terrible pain everywhere. I was given ORAMORPH. I could have this if I wanted every one or two hours. Physios would come back tomorrow. Sat out of bed for a while but felt terrible and started shaking. I was put back to bed  They were a bit concerned that the SEIZURES would start again, something no one wanted specially me.
Paul came in the afternoon he was a bit shocked.

On, off, sleep, last night, Feeling a bit better but still feel very weak. The physios came again and I tried again to walk. This time very shaky still but not as much as yesterday still pain.They asked if I could do the stairs. I managed but I just about shook the crutches from my hands. I was passed fit to go. The nurse told me what to do exercises and said stitches come out in two weeks. Still not feeling the best but I was going home. Phoned Paul he said he would be here after dinner.

He left home around twelve thirty so here about two pm. Doctors letter and tablets and soon away.
NO an accident held Paul up at Newark roundabout. He got here at four thirty. I decide to go home in hospital gown and dressing gown, returning it at my check up in around six weeks. The journey was very painful and I still felt very weak. Home, Summer went mad to see me and was crying with joy. She sat with me for a lot of day.

Lindsay here as Paul at football for the day. Lindsay cooked chips for dinner and afterwards Jamie-Lee made cakes. Tracy came later. I sat down and just rested most of the time.
After dinner I felt very light headed and sick. Lindsay helped me to the bathroom where I was violently sick. I then tried to lay down on the bathroom floor, not good as it ceramic tiles and cold.
Lindsay and Tracy helped me back to the chair where I continued to be sick. This is just about the last thing I properly remember. Lindsay, Tracy and Jamie-Lee stayed with me till Paul got back. They were getting ready to go home when I started to be ill.

Paul came home around six thirty, and I was slumped in the chair and not very responsive at all. Later in the evening I got worse, still wrenching and was very unresponsive and about 11-15pm he called for an ambulance. I was taken to hospital where I started to have more SEIZURES and still being sick till there was no more to come up, wrenching and in terrible pain like GASTRIC FLU. On oxygen and a drip Paul said the Doctor had a job to get a line in as my veins are very thin and hide when I am ill.  No wonder I have so many bruises where he tried. I had a chest Xray and a CT scan on my head and stomach. I was admitted to a ward around seven thirty am. Everything hurts, stomach terrible pain just about everywhere. The ward is very noisy as it straight from A and E.

Trying to make sense of what has happened. The nurse sat me in a chair later, but I started to shake a lot so back to bed for me.Worried about more seizures, violent headache, the nurse said this is most likely dehydration. Still on a drip (three bags in total)  Lots of blood taken to test for electrolytes as very low (something to do with your blood)  probably because I was so sick. A horrible day and so much pain. Had to wait for pain relief as they were so busy, not good for RSD. That did not help much, not really any sleep either. If I sit up I start wrenching and feeling dizzy. Saw it get light from pitch black not a good night. I want this nightmare to end, but its not a nightmare its so real.


Feeling quite a bit better but still quite shaky, still stomach and chest pain, knee not too bad, at least my head ache has gone.
I also saw the PHYSIO here as well and she had me walking with a zimmer frame. 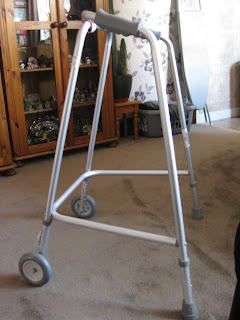 Which I can take home with me and I have my crutches at home too. I got on quite well considering  my chest and stomach hurt so much and how shaky I am. She said I am fit to go.

I saw the Doctor and he said I have got a SOFT HEART MURMUR and my SEIZURES are a mixture of EPILEPTIC and NON EPILEPTIC  SEIZURES .The chest xray and a CT scan on my head and stomach were clear.. The heart thing is not a concern, but I need to see the Neurologist and will be sent an appointment soon. I hope it's Doctor Solinas I see, as he knows me, from the very bad SEIZURES I had before. Anyway home in two hours time, just to make sure I am alright.

A nurse took out my cannula I pressed on it for a while, it was in my arm bend, I then sat and listened to my ipod. A bit later my arm felt wet, I looked down and there was blood dripping out. A big pool on the floor and all over the bed. I shouted the Nurse and she sorted it out. Did you press on it? Yes I said. The more senior Nurse said it can happen. I have at least two pints left he was joking you have around nine to ten. I had lost about half a pint he thought. Good job I did not go to sleep. I said to her you nearly killed me. She looked very scared but I made her laugh by saying I nearly did not go home.

I rang Paul he was surprised as we were told that I needed to see a Neurologist before I went home. Anyway I am not complaining two different hospitals in two days is not good.

Paul picked me up and got all my tablets and second doctors letter and we were off home.
The journey was painful my knee felt every little bump so did my stomach and chest.

Summer again was very pleased to see me and sat with me a long time. Poor Summer she does not know what to think as I keep disappearing.
Phoned up a few people to tell them I was home. I think if you ring up your self, and they have spoken to you, and not a messenger they feel more assured.

Bed time struggled to get up the stairs but I was looking forward to my own bed and not one that's get you hot and sticky. Home and please no more hospitals for a while.Mr Joby John did say it was a risk with the RSD and SEIZURES. If it makes my knee better it will have bean worth it. 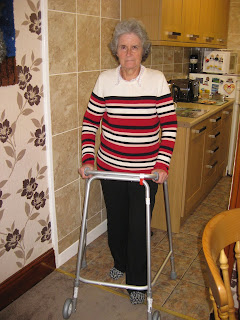 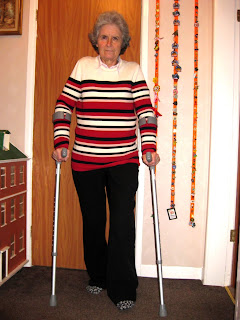 Slowed down but not for long.

I put this short blog up to let you all know how things went with my operation.
All the best to you all and I hope you having a better time than me Love Gill.