Well another good night with Summer. I think now she is over the worst of her separation anxiety. I am using less spray now. She settles now quicker and looks like she wants to be in her basket.

I brushed her later, her fur is so silky soft and warm just the right to cuddle up to.
Summer likes nothing better than cuddling up to me, as soon as I sit down she is there ready to jump up on the chair.

Not really much else going on- the days are still pretty much the same as they were last month. Most spent in the garden or house. Soon the day will come and we all will be released again to go where we want to. I have not suffered too much but I know a lot of you have. Keep it up, there will be an end.

Summer has got a new friend- this little white cat from next door. She is fascinated by him and spends a lot of time waiting for him to come and see her- crying for him if he does not appear. 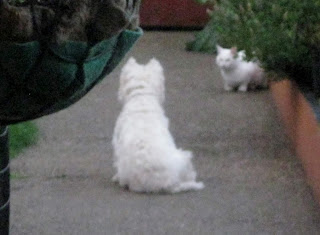 A little girl on the common is madly in love with Summer (a lot of people are) I printed her out some pictures of Summer from a pup up to now. (Andrew helped me). I gave it to her Aunty to let her have when she got home. Now she will have Summer with her all the time.

A lot of spasms in my right arm plus pain. I wish it would hurry up and improve. When I hold up my arm- it is not straight and hurts a lot when I try to make it look like the left one. I think it has healed wrong and is at an angle. I do not see anyone Medical at the Hospital till June. Even then nothing is certain that I will still have an appointment. It depends if we are still under some sort of lockdown.

Paul is improving day by day and getting stronger.

Cutting the grass today- Paul usually does it but I said I would, a bit hard with my arm but I managed. I did have Summer helping me. Very warm today. 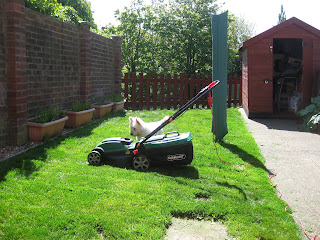 Come on let's get started. 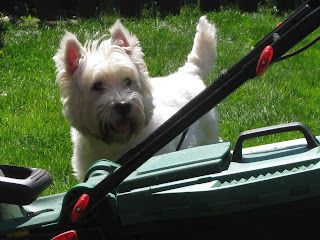 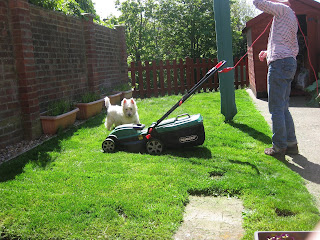 A few holes on the lawn so I am filling them in with soil, then grass seed on top. The weather has bean very warm so I will have to water to keep it damp. Summer will be happy as she loves the hose pipe and any water.

Seeded some herbs- Coriander, Basil and Parsley straight into the garden.

Last day of my ANTIBIOTICS for my water infection, this took 2 weeks worth of tablets but now has all gone. I am very pleased about that too.

Ironing today, still have to do it left-handed, took a lot of getting used to but OK now. I just turned the ironing board the other way. After the ironing both arms hurt.

Watered the lawn with my helper Summer- she got very wet, did she care- course not the wetter the better for her.

Later I did a bit of shopping at Lidls. I was not long at all, the shop was not busy. Kept social
distance away from others as I should, not always easy in a supermarket.
Andrew went to Morrisons for most of the main shopping on his bike. Certain things Paul likes from there. He was not too long either- between us we got just about everything.

My Grandson Jay-Jay badly cut his arm late last night and he and Lindsay spent a lot of the time in A and E. He is alright though had the cut glued instead of stitched. He was very pleased as he does not like needles.

What a change of weather dropped from around 22C to around 9C and going to get colder as the week goes on. Hailstones first thing. Two days ago T-shirt and shorts weather-- today coat on, and hat plus gloves to take Summer for her walk, the wind is so cold, like Winter again.

The cat we have called Tabby real name Chubby has passed away. This was one of Summers friends who with his Brother Ginge used to spend a lot of time in our garden. He had not bean well for a while rest in peace Tabby/Chubby.

My friend dropped me round a pile of puzzles all very good ones. This should keep me going for a while. 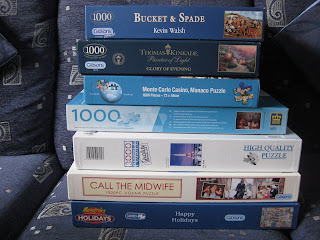 Walking through the Fairground common my friend and I saw 2 beautiful young tan deer so lovely. My friend said if she had been on her own she would not have seen them. This common is a lot nearer to the road- so I hope they found their back to the main common. Later on we saw some ducks and their chicks near the lake.

B12 injection today it really hurt a lot and came up in a big lump. Not bean this painful ever, hours later it still hurt.

I started trying to finish off a cardigan I started for Jamie-Lee before Christmas, mostly done just bands and sewing up to do. I did some but made my wrist and arm hurt a lot going into spasms.

My friend Andy's Birthday today- so I made him a cake yesterday, its a boiled fruit one so easier for me to do. Iced it today and took it over with his card and present. 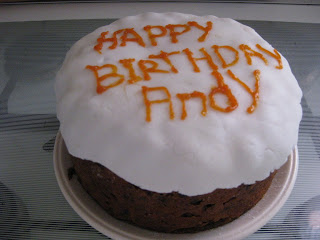 Tomatoes and cucumber plants are doing well- very pleased the way they are growing. 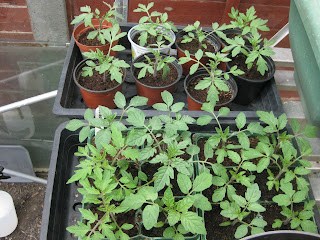 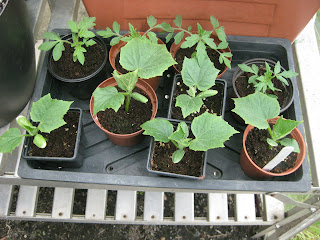 I have finished off the cardigan for Jamie-Lee not too sure if it will fit her now but I am very pleased with how it turned out. I told her if it does not fit I will start another one a bit bigger. 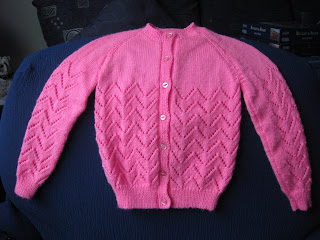 A very pretty colour I think.

Here we are at the end of another Blog-  Not a lot of change a few laughs here and there A different style of life at the moment, an uncertain one too. Things will get better for all of us, we just have to be patient and wait.           All the very best to you all and keep smiling Love Gill.