Today I am cleaning out the kitchen cupboards not too easy to do as hand still not the best.
I have more movement than I did, but the spasms are killers. I went through to the kitchen and knocked the door frame with my arm,  my balance is not the best at any time. The pain was terrible and shot up my arm like an electric shock. I was on my knees and holding my arm trying to do Wietse breathe- to lessen the pain (my long term Physio used to tell me to do that- breathe Gill breathe) the pain lasted a long time-then the tightness came. I sat in my chair for a while till it went a bit- but by now it a target for more spasms as the muscle was rock tight.
I did manage to finish the cupboards later but took it very steady giving up be for I really wanted to, but there is always another day.

Came on the news another 3 weeks lockdown I think this is the right decision myself.

Nice Chinese for just me and Andrew as Paul still in Hospital; he is doing better and I think he soon will be home.

On the common with Summer -we saw a big stunt kite, it was around 40 feet across. As it was a very windy day it took both of the young lads to hold it. At one point one of them bean pulled along on his knees. I think I have said before I love kites of any description.
I think I was taking more notice of the lads than Summer- because she barked at me a few times as if to say hay it's my walk. Ok Summer back to you sorry.

On the way back we saw a Mother and Dad duck with 3 ducklings- the first I have seen this year.

Summer has bean sleeping better since I got the spray so hopefully it's the start of better nights now.

Brought my tomatoes and cucumber plants from the spare bedroom to put in the greenhouse as its quite warm in there.

I finished off the puzzle so I was pleased nice one too an old-time one like I have done before. 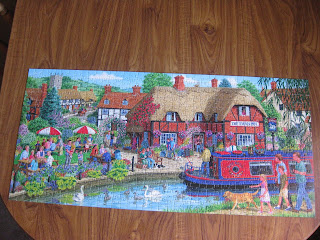 Took some cuttings of a few plants, then put the Mother plants outside on the path for someone else to have. (they were gone later)

Andrew did tea- I helped a bit we had hash browns and mushroom omelet very nice too.

Later we had a pit fire and sat outside for a while it was nice not too cold.

I think I might have a bit of CYSTITIS as pain when I wee and over my bladder. I have some CYSTOCALM that I have bean taking, seems to help a lot. I have taken this before and usually is very effective so I will see this time.

Had to repair the firepit as the fire had burnt through it, it was a roaring fire, all done ready for next time.

Washed Pauls's chair cover and could not get it back on as you have to stretch and pull it to fit the chair I will try again or let Andrew do it.

Potted up the toms into little pots 12 of each variety 24 in all-  5 cucumbers so hopefully that will be enough for me and my friends you want them. The rest of the seedlings  I put outside for anyone to take, they soon went.

Taking off my jumper trying hard not to spasm up my arm, and my neck went into a very bad spasm.

I have now finished all my CYSTOCALM stuff I think I am OK so that's good.

Swept the path in the garden, and outside the front, from 2 doors away on each side.
Both look a lot better just need a bit of rain to clean the paths now.  The weather has bean brilliant in the last few weeks so I think that makes every feel better even if we can not get very far.

Paul home today so that's good not quite right yet but just needs to get stronger.

I woke in the night in with back pain- and when I wee a lot of pain and blood also. So the CYSTOCALM had just masked the symptoms. Our Doctors are closed as most are on a Saturday. So I had to ring 111- never done this before. Lots of number pressing then someone phones you back within 2 hours plenty of time to get to the 2 chemist nearby that shut at 1pm. The Doctor (Debbie) rung me back. She prescribed ANTIBIOTICS MACROBID/NITROFURANTOIN 100 mg 2 a day. Because the time of her ringing back being more than 2 hours (nearer 4) after they said they would ring back- both chemists nearby were shut. I asked Andrew to go to the next nearest chemist in town. This one shut at 4pm it was now 3.30 so not much time but enough on a bike. He was there and back quite quickly. Guess what they had sent it to the wrong chemist- our chemist the one that was shut. On the phone again luckily I got the same Doctor. By this it was 4pm and this Chemist had shut, she was furious as she had done the writing herself.

Right she said I will send it to another chemist this one was further and shut at 6pm. Andrew was not keen on going again so I asked the next-door neighbor Karol. I was in quite a lot of pain and padded up to try to stop any accidental leaks. Anyway we got there and they were closed- at 4pm. I could have cried all I wanted was the  ANTIBIOTICS please. Back home on the phone again- same Doctor so that was good. She had sent the PRESCRIPTION to the other Chemist nearby. I did not know even know there was one there at all. She said she did say Lloyds, anyway back again with only minutes to spare as now 5.40 closes at 6pm. Arrived at proper chemist at 5.55 so just in time- at last got the  ANTIBIOTICS. I felt like crying again what a performance over 7 hours nearer 8 to get them. I thanked Karol very much as he had done the journey twice. If there had bean traffic we would not have made it in time. What a day I feel all in. Hopefully now things will get better. Big thank you to Andrew and Karol plus the Doctor Debbie you tried her best.

My Son phoned up later and said 111 was not very good- but there is nothing else at a weekend is there?

Not feeling the best later I think the infection has got a hold- the ANTIBIOTICS hopefully will sort that out.

Not the day I wanted woke with a bad headache light-headed and pain in my back and bladder.
I spent the day on the settee. Not really sure of what went on that day. I think the infection had got to my nervous system.

I feel a bit better today but not really with it much. Andrew took Summer out for her walk- she did not go yesterday. Andrew said she did not seem bothered- she knows when I am not well so she spent the day looking after me Nurse Pup. 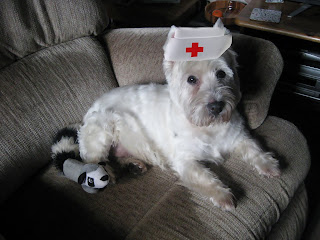 Today I feel more with it. I took Summer on my own so that was nice for both of us. Back pain not as bad but still hurts when I wee no blood now so that very good.

Summer settled again last night, she is doing well now. Hopefully she will keep it up as both of us get more sleep that way.

On the common today I saw a young deer running along, its only the 2nd one I have ever seen on there in 40 years.

Summer's chews had nearly all gone. So to avoid a crisis I headed into town. Well I say town more like a Ghost town. I went to 2 shops-I think they were the only ones open.

Around the market area a new multi cinema complex is being built and one of the machines sounded just like the Air raid warning sound. One older man thought the same I think to him it must have felt very similar to the War years but without the planes obviously. Trip done headed back home called at the chemist to get tablets but now they shut for dinner just missed them by 5 mins. I will get them tomorrow or maybe Andrew will later.

Feeling quite tired now so a sit down with Pup I think.


On Summers walk today the horses were close to the gate-I told her to go right Summer and she just went along the right had track. She did very well as she is scared of the horses. On the common now there are 17/18 of them. An extra treat today Summer.

I took these pictures of the horse chestnut (conker) trees they look beautiful I think. 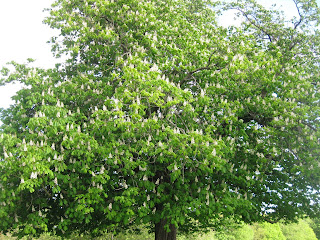 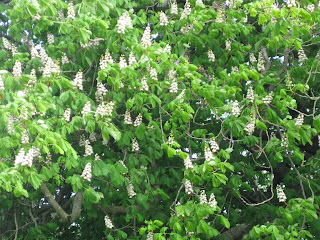 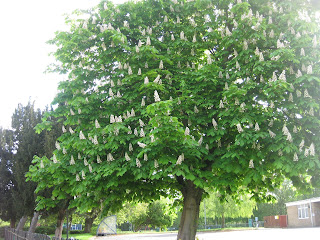 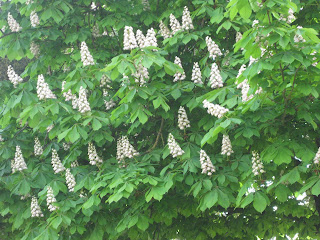 Lots of candles this year- a bumper crop of conker in the Autumn?

When we get back we always do the same- cup of tea, rest on my recliner chair. I said to Summer I felt tired.  Summer was already on the chair, she then pressed the remote to recline the chair and put the feet part up. She then looked at me so funny. She did it while I was in the chair too. I know its probably a fluke but I like to think she knows what she is doing. 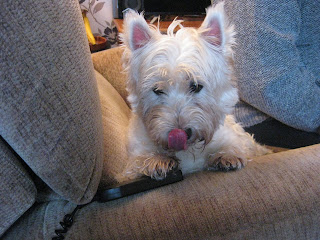 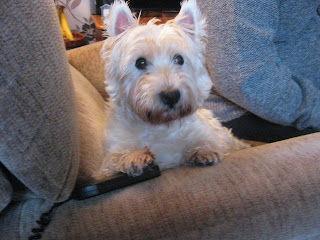 Well another month has gone pretty much the same going on as last time. Still staying in most of the time but we still have our walks so that suits me and Summer fine. Paul is improving. I hope you are all doing as well as you can in this crazy time. Hopefully things will soon be better and the world will recover. 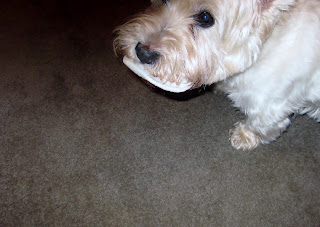 I will finish with another Summer picture- she was given a big prawn cracker but decided to walk around with it in her mouth. She will sometimes bury things; I say bury she will just push them under cushions or in corners. What would we do without our pets?

All the very best to everyone see you next time love Gill.