Another warm day- planting some peppers that we have bean given, also some sunflower seeds that Andy from across the road gave me. Rain is on its way soon so it will be a good start for them.

All washing done and dried. Cleaned the bathroom and the kitchen.

Paul did the ironing so that was good, thank you, Paul.

On our walk today we saw the swans with 7 babies. One of the babies or signets, as they are called, went into the water and got in trouble from his Mum or Dad. He soon went back to the bank with the rest of the family. 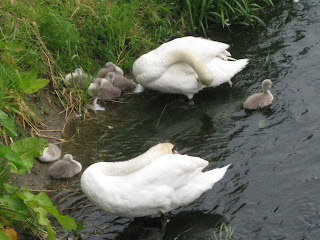 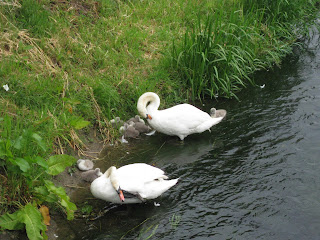 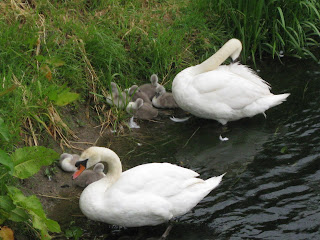 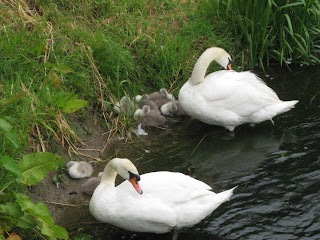 The little white cat who is called Snowy, tried to get in through the dining room window- cheeky little thing. Andrew and I had to shut the door as he was determined to get in. He is a very friendly little cat and now goes in the shed for naps while Andrew is having a smoke. 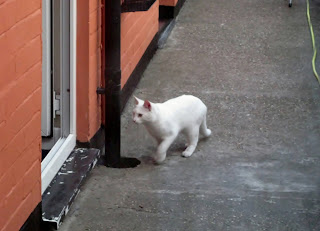 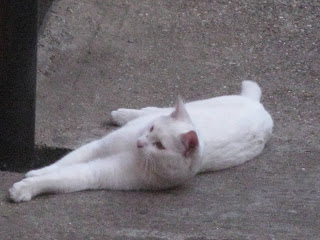 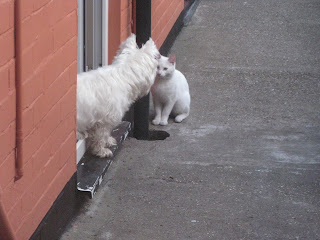 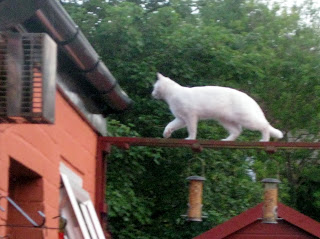 Helping Paul sort out the big cupboard we have opposite the back door. This holds everything from Summer's food to toiletries and all the household pots and pans plus more.

Lindsay phoned up, she has hurt her back and the Doctor has put her on DIAZEPAM. Rang her later and she said it had helped.

Later on, Summer had bean out for a wee and stood at the door to be let in, stood behind her was Snowy who also wanted to be let in. We are going to be careful or he will sneak in.

Rang the Hospital about my appointment Monday for my wrist. After a lot of questions, they agreed to see me. This I was pleased about as my wrist, fingers, and arm are still not right.

Bean knitting a small rabbit as a present for a little girl. I made one of these ages ago for the Hospital as a comfort toy. 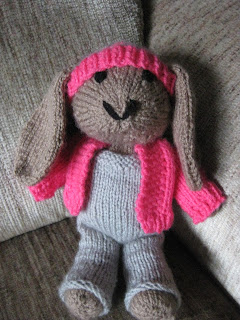 The appointment went quite well, The Doctor showed me the X-ray from when my wrist was first broke 1st January. The bones were different from each X-ray and even I could tell they were healing now. Still not quite right yet, he said but on the right track. The nerves are not as good still quite a way to go be for they are right. He said because the bones are doing good I do not have to see him again.

In around 1-2 months' time and if no better- I need to go back to my own Doctor and might have to have a small procedure called a decompression, on my wrist to loosen off the tightness of the nerves. This he thinks if necessary, be done under local anesthetic, hopefully  I will not need it. I am trying to use my hand more- but that's not easy when it goes into spasm at the slightest touch.

Pulled my first radish today, also the sunflowers are coming up. Both these were from Andy across the road.

A lot of pain today around my right shoulder and neck, very tight. Fingers are also very stiff.

Did the ironing still left-handed as the right hand will not take the weight of the iron and hurts too much anyway.

My granddaughter Jamie-Lee was here and had tea with us, she was good as usual.

Fed the greenhouse tomatoes and cucumbers both are doing well. Apart from one cucumber that has died no idea why, it just did.  Any way still 2 left and they are looking good. Weird because Andys cucumber died too but Lindsay is doing really well.


Finished off the bigger Ted for Ness, 2 doors away- she is a Nurse at Lincoln hospital. 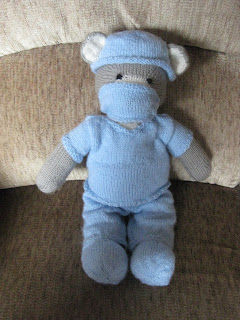 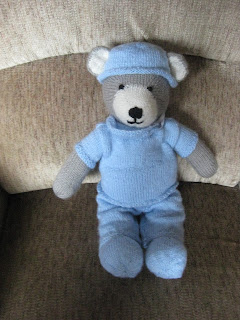 Also a look-alike Summer as a Pup, for Izzy who loves Summer so much. 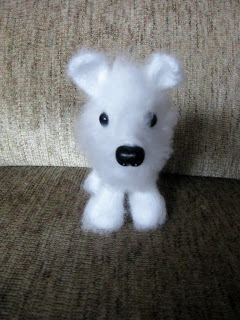 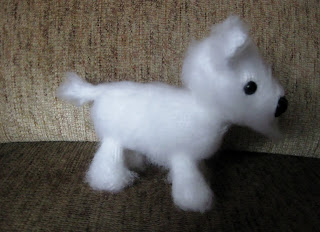 Repotted my 2 orchids as were not looking very happy. Hopefully now will do better.

In the garden, most of the day tiding up roses and a bit of weeding moving a few bits around.

Very heavy feel to the air today- storm headache. Later on, it did feel fresher but get the storms we were told to expect.

Tomatoes are on their second tieing up so getting big- 2 lots of flowers on them so soon little tomatoes will be forming. Cucumbers also flowering too. The 2 that are left are doing very well.

Rung up Maxine the lady that cuts Summers hair, for an appointment. She will ring back as shopping at the time. Trouble was the landline decided to play up and she could not get through and had no other number We could ring out but no incoming calls were able to get through.
Summer looks more like a sheep so bad;y needs a cut. An appointment was made for next week, when we realized what was happening with the phone.

Later Summer was sick and not her usual self at all. Probably picked up something off the common. She is always finding something to eat that is not good for her.

In town today a few more shops open a big queue for Primark- not a place I needed to go in so I was quite pleased.

Later night time I was looking after Emmie the first time this year. She is usually easy to look after and her Dad is never very late. We came back here as she wanted to see Summer. At one point she was scared of her but not now.

Phone now mended man, came today while I was out with Summer, so that's good.

Summer her usual self now so I am pleased hard to see her looking so unhappy.

Poor little Jamie-Lee has had an accident she had gone into an iron railing cracking her jaw and badly bruising her face and chin. Lindsay (her Mum) took her to A and E and after X-Ray, she was able to go home- in pain but better than Lindsay thought she would be. She even asked for food soon after coming out of the Hospital. Brave little girl, hopefully, she will not hurt too much tomorrow.

Happy Birthday, Andrew. This was a Birthday he so nearly did not make after he was attacked last December.

We got Andrew some computer stuff consisting of a case and a water cooling setup for the computer. The inside of the case lights up in different sequences- very nice. Not just for looks though- as his room is up in the roof, and can get very hot, so this sort of cooling system can cope a lot better to cool things down. Other presents from Wayne were natural shower stuff- Lindsay and family were beer and tobacco.

Father's Day- as well so Lindsay round to see Paul. He got presents of Rum, beer, cheese, and a pork pie, very happy he was too. Indian meal later on for Andrew, Paul, and I. Very good it was too, a different place to what we usually one we have not tried before.

Hair cut for Summer- she was so relaxed that she was nearly falling asleep after ten minutes so Maxine had to hold her up. After around an hour, she was done, looking more like a little lamb now and so cotton wool soft and white. She hopefully will be a lot cooler, just in time too as hot weather is returning again.

Another hot day but very heavy. I have a storm headache. Quite a bit of all over pain too.

Doing more tieing up in the greenhouse and weeding. Trying to just keep going- is better than sitting for me, if though I am exhausted most of the time.

Jamie-Lee and Linday here for a while played with the cooking stuff upstairs. The swelling has gone down on her face so not too bad,  just a bruise under her chin. Lindsay said the swelling had gone a lot.

Making Jamie-Lee a cardigan to replace the other one that Emmie had. This one is a bit paler pink all was going well, then I made a mistake, trouble was I did not see it for a few rows so had to pull it down and start from there again. I got it all right in the end and now going good.

Ironed all the bedding with left hand again as right still not able to hold things that are a bit heavy like the iron. Soon getting a new iron as this one spitting out  scale, it is quite old and used a lot.

Just general cleaning up today, very hot temperature 29-30c did not really cool down at night either.

Put some CDs on a memory stick for Angela for her car.

Had Jamie-Lee later, staying for tea as well. We played with the cooking set again and made pretend meals. Jamie-Lee made a great big trayful for Andrew no meat or fish of course she said because he is a vegetarian.

Bit cooler today no storms as yet- some rain though.

Paul has got a bug/virus or something and has bean in bed last 2 days.

I cleaned the computer room so everywhere clean and tidy now.

Sat watching TV later and looked down and saw Summer laid next to my chair, only it was not her as she was further away- it was Snowey the cat, how long he had bean there I do not know. He gave a big yawn and walked off. He must have walked straight past Summer while she was asleep. Cheeky little thing.

Oh well, another strange month because of the VIRUS- but trying to make the best of it the same as everyone else.

Hand is a bit better- but no strength or power in it, fingers very tight. Shoulder is the worse though and at times very painful, with shooting pains from my fingers up to the shoulder and in reverse as well. My shoulder creaks and cracks if I try to lift it up and out. Still feels very tight and stiff too.  Going to see the Doctor soon that's if I can get to see him. So many questions to start with then often a phone call appointment which is not the same as he can not see what is happening to the arm and shoulder.


Summer is a lot better at night now, and at times stays in the dining room to sleep instead of the front room.


All the very best to everyone and see you next time Love Gill. 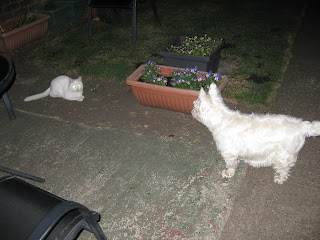 Picture of Summer and Snowy eying each other up at night time.