I am still on a high from the Running Awards. I now think in my head at least I will run again, but as yet not bean able to go for a run as I need somebody with me just in case I fall or pass out. No body I know seams keen to come with me. I have had a mixed response from people about my possible return to running, some say I am a fool to even think about doing it because of what damage I MIGHT (I say might) cause. Others say well done, give it a try. Who knows what the future will bring but while I can do this even if it does not work out I will feel a least I have tried. With RSD it is so up and down, I want to do this while I still can. My physio is behind me 100% so long as I don't go further than agreed, about a mile, my Doctor agrees. So what have I got to loose? Nothing - and may be a lot to gain.

Now back to reality. My foot is swollen and painful, probably the after affects of Saturday night. I have bean in town today on my scooter it always makes my shoulders hurt a lot. My foot is playing up also, so I dangle it off the side of the platform of the scooter so it does not get so much vibrations. My eyes are so sore and red - loads of drops being used. I have no Physio until the 29th of this month so I will not get even get relief from that, Wietse is on holiday, he could have taken me with him. I have bean on the sleep tablets for now a week but they don't seam to have any effect I can get to sleep but not for long I always wake up a few hours later. I do not enter REM sleep or so I have bean told. The only tablets that helped were DIAZAPAN and AMITRIPTYLINE, neither I am prepared to take because of these side affects; head ache till midday, not really knowing who I am or where I was most of the time. Like a zombie. No thank you I will put up with it for now till something better comes along.

Pilates - I now go to a different group, its the same instructor but at Welton, a place near where I used to live and went to secondary school. Unless I get a lift I need to walk about a mile to the meeting place where I meet John (another member) to wait for Joanne the instructor to take us to Welton for the class. The class lasts about an hour, then John and I go for chips while Joanne does the other class then we all go home. I get dropped off out side the door so no more walking but it is a long night from leaving the house at about 5pm to getting back around 8.30 to 9.00pm. You are may be thinking why don't I get a lift from the door but for everybody that does not know Lincoln traffic it is a nightmare you stick to your route and hope for the best and sometimes pray. There are traintracks running through the centre of town with trains every ten minutes or so, because of the way Lincoln is planned(?) it causes tailbacks everywhere. Later on that night/early morning I hit my hand on the door frame resulting in a graze and large bruise forming as I hit the vein. Very painful. How can you be on so much pain relief and still feel so much pain? Last night I slept from 4AM to 7.45AM that was with out the tablets.

Today is my DEXTER SCAN this will show if the OSTEOPOROSIS has got any worse. My Hand is swollen and sore I could not do the washing up so that was one good thing. It turned out there was no measured change in height which is good, because if the OSTEOPOROSIS worsens it can affect your height through the bones settling. I was then weighed she asked if I thought I had put on weight I said yes a bit. I weighed 8 stone 13 pounds. At my last scan, two and half years ago, I weighed 8 stone 9 pounds - 4 pounds gain. She said most people gain that and more over Christmas, I was pleased with this. My running weight was around eight and half stone. On my wedding day nearly thirty five years ago I weighed the same. So you can see I don't gain weight fast, more the other way if I loose alot of weight it takes a longtime to put it back on. When I was in hospital for a few weeks I went down to 7 stone 4 pounds. It took me a long time to get back to my normal weight.

Bad night, severe spasms a lot of pain in toes. I was awake most of my short night. I took two sleep tablets before bed so it shows they don't work on me. My hand is quite bruised but the swelling has gone down quite a lot. Back to doing every thing again. My joints are painful one minute then not the next, my bones hurt. My brain is non stop buzzing, like a MENSA brain with a big IQ I am finding it hard to think or relax.

Today I am at the Doctors as I had a phone call yesterday saying my DEXTER SCAN results are in. I am a bit nervous as they phoned me usually when they do some thing is wrong. I go every month so they give me any tests results then. My Doctor is away so I saw another one he was very nice, Doctor Clooney nice. Back from dream land, my results are good the OSTEOPOROSISS has not altered much he is very pleased with that result as am I. He was asking about RSD as he was not familiar with it and seemed genuinely interested. He is there for a while so I might see him again. Found out today Garry my nephew is in remission from his Cancer that is great news, the new year has set off better than previous ones. I hope this is a start of a better year for every one.
Andrew my son was having a drink of Baileys and milk, and Sandy my dog kept trying to get some so he stuck his fingers in the glass and let her lick them off she loved it and kept trying for more even reaching to get her tongue in the glass and barking. Usually at nights she is wanting attention, but about an hour later she was a sleep in her basket. So we were able to play on the Wii with out interruptions. She was well asleep, so now do we have a dog with a drink problem!? 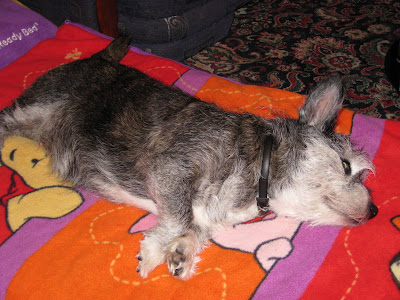 Sandy down and out
29th

Physio at last relief. I hope this helps my body calm down and relax. Weitse put in the needles, one jumped straight out as my muscles are so tight, and he did could not find it for a long time as it had stuck in the floor. One hurt as he hit a nerve but on the whole it went alright. He asked what I had bean up to and of course looked at my hand. 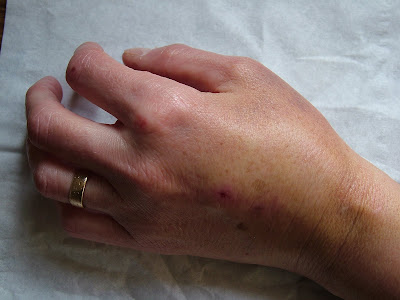 My hand over a week later. 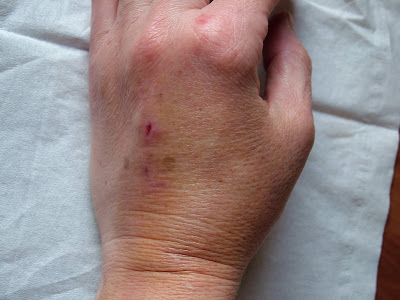 
I brought him up to date he was very pleased about the award I had got. He told me all about his holiday, it sounded amazing. He went to Canada snow boarding and other activities. He said if I went I would not want to come back and be like Forest Gump and keep on running.

Well that it for this post. The start to the new year so far has bean mixed but mostly good. The running is something to look forward to, and to give me hope, something I seamed to have lost. May be it will help get a few of my friends back who for different reasons no longer come to see me. Am I that boring.