Well here we are in Flaming June but its not that warm.

Age UK hardly any staff today, the kitchen only had two, two on the counter and two waitresses. Plus Vera and John not too sure if they were of much help Vera was missing most of the time.
Very busy too the capochino machine had to be turned off as no one to work it. A lot of disappointed customers.

Quite cold on the common and rain. Pup and I got quite wet. Wheres the Summer gone?

BBQ today at one of Paul's friends house. Very good too, the sun was out and it was quite warm. Very heavy though this affected me a lot, head ache and body pain. Just about when we were all thinking of going the sky blacken and the rain came down like a monsoon. We sheltered until the worst had gone then made a dash for the car. 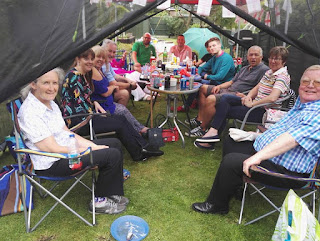 This was just before it rained, me front left Paul front right.

Phone call with Doctor Hindocha--- I asked him if I could reduce the TARGINACT from 20mg in the morning to ten. He said fifteen would be better and he would do a PRESCRIPTION for me.
I also said I had some information about the shooting pain in my neck, head and eye and the tenderness on my scalp. He said he would discuss it with me at my next appointment. I am to have a full blood test as well. My appointment is not till July 4th so by then I would have tried the reduced tablets (Hopefully) and had blood results back.

Funeral of my friend Miriam. Angela picked me up and I did not need to ask her how she was. I think we both felt the same. A lot of people were there and I think she would have liked the service. Not a lot was known about her as she liked it that way. Rest in peace Miriam.

We started the kitchen tiling today going quite well but I think this is the easier bit. 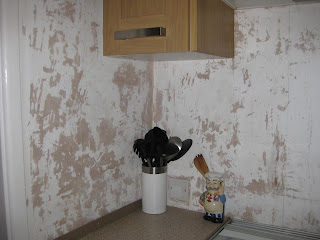 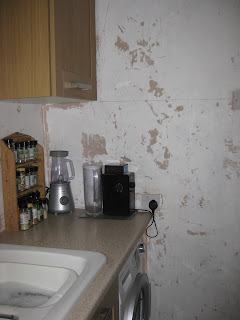 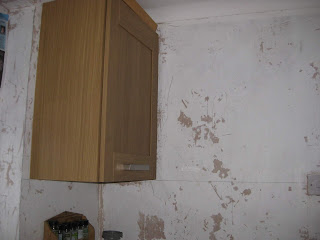 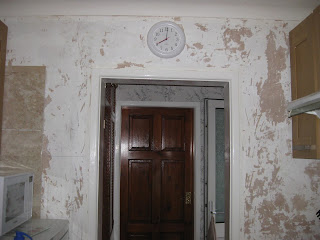 Be for we started with all the paper off. 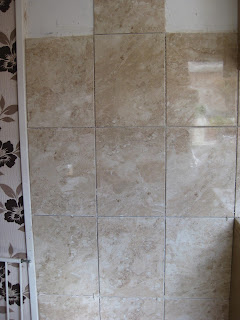 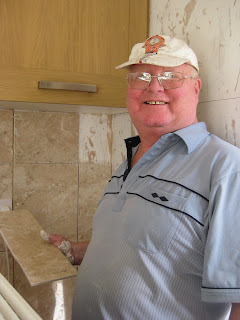 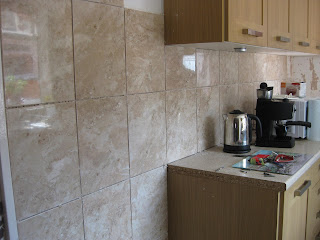 Paul tripped the electric trip switch, and all the power went off. The TV was not on at the time but after refused to come back on later, a bit like last time.The TV still had the stand by light on this time. I went on to the Internet and found affix hopefully.

No Pilate's, not up to it yet. Bit more of the kitchen done getting more work cutting and shaping the tiles.

Sorted out the TV, was quite surprised when it started working took a few goes but got it in the end. After reading the information, this is quite common with Sharp TVs. This will most likely happen again if turned off, or a power cut.

Joints are bad today I ache all over. Sitting is not good today at all and I am exhausted too. Not from the kitchen but lack of sleep and proper rest.

Blood test this went fine, sometimes the Nurse has trouble getting any blood as my veins are hidden and very thin.

Red cheek again and pain, the red cheek seems to act like a warning of things to come as I often have more pain when my cheek glows. This feels like sunburn. Only the right one goes red. This is what I need to discuss with my Doctor next month.

Kitchen not going as well but still moving forward.

Age UK busy again- three in the kitchen they can cope with three, four is better but three manageable. Lots of customers today and they stayed later as well. We are being thanked from Age UK for all our hard work, with a Tea Party for all the Volunteers. Lots of different cakes and tea. Very good too plus a Quiz and a singing key board player. A good afternoon enjoyed by most I think. The singer was not too good but I have heard worse.

Looked after Ben and Emmie from 7-00pm. They were good but Emmie is very energetic and had me running around after her. Ben was mostly in his room but did come down for food.. A good night to finish off a good day. Squidge came home around eleven thirty.

Kitchen still going quite well now, the wall are not true so a bit of extra effort is needed. Looking good as well

Sun shine today, hope it shines on my little tomatoes they could do with a little help. 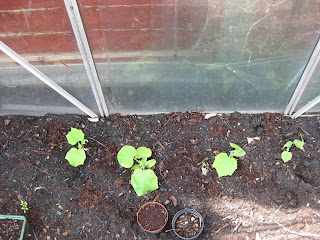 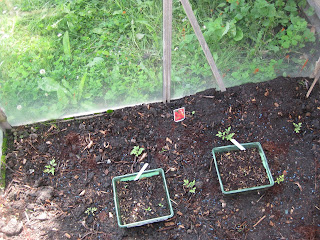 Toms  planted out you can hardly see them. 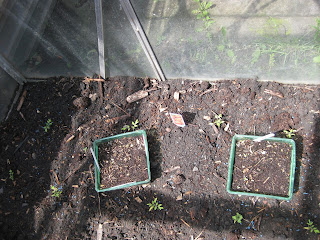 Finished tiling the kitchen now just the grouting and paintings of the wood work. Looks good but has bean a lot of hard work. This will now hopefully last for the next twenty years or so. The bathroom was done twenty five years ago when Andrew was only four. This still looks good.

Summer decide to drink Andrews smoothie. He put it on the floor and dipped his finger in to give Summer a taste and she went straight for the jug and started slurping it. She liked it and had a fair bit, would have had more if she was not stopped. 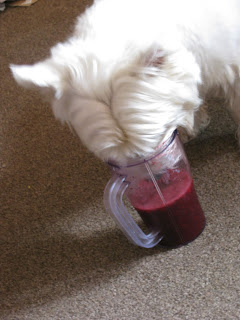 Getting her nose right in. 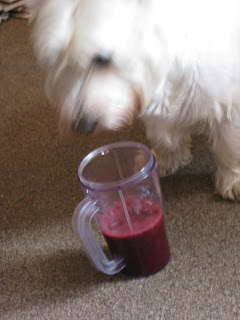 All the grouting is done now and painting now the big clean up dust everywhere. Washing down the cupboards and walls.  Chinese for tea. Soon the Kitchen will be back to normal and I can get back to cooking meals again, Chinese is nice though. 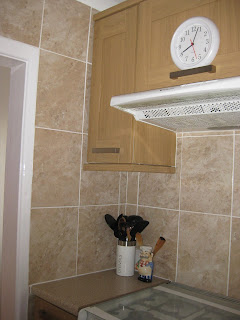 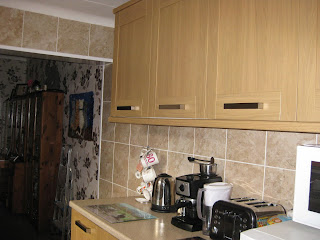 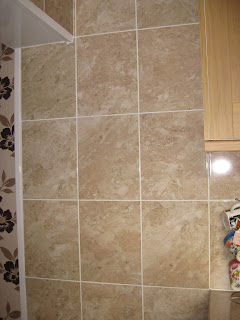 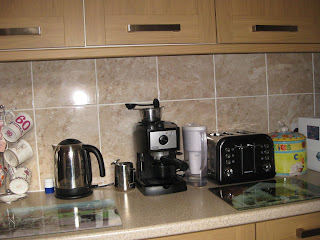 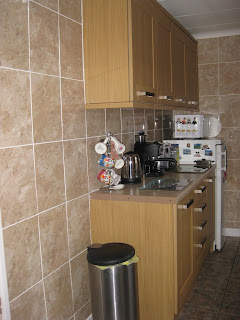 All done well pleased with the end result. (At last we can have a clean house now.)

Age UK today we have a 60th Age UK birthday Party- for 132 guests for a three course meal. 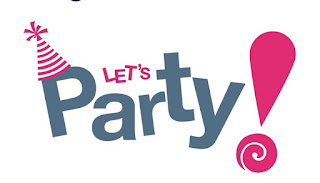 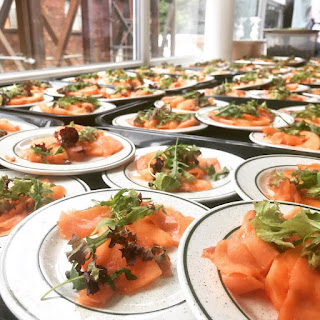 Some of the salmon ready for the guests.
Soup or salmon, beef dinner or quiche, chocolate tart with cream or Eaton mess plus wine or orange juice. All served by us Volunteers and a group of Air force men from RAF Waddington camp, not far away. They helped a lot and we all appreciated them being here. The old people seemed to be enjoying themselves. There were Choir singers, and a group called, No Direction--  The the oldest Boy Band or that's what they say anyway .Good singers too. The music got a bit loud and was causing me a lot of pain, as  most of the work was now done, I said my good byes and left. I still had to walk home too, I could have gone on the bus but my body hurt enough as it was the vibrations would have made it worse..

A good day but I am very tired. I did go into Age UK on Tuesday to help as they were short staffed again.

When I got home Paul had done the wall papering in the back hall way. This is where Summer eats her food and has her water dish. Pictures next time when its finished.

Spring cleaning down stairs to get rid of the dust from doing the kitchen. I started in the bathroom and Paul in the dining room. I scrubbed both the bathroom and kitchen floor. Summer came along and sat on my knee while I scrubbed  and went to sleep- this made things a bit difficult. 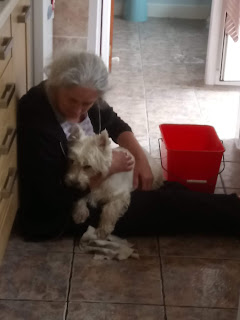 So relaxed she fell asleep.


She does not like change and will be pleased now its all done. Not told her yet that the bathroom grouting is getting renewed soon. This will not be too bad as Paul can work in there and shut the door. Hopefully all the mess and dust will stay in there.

The common, with more Buttercups come out and of course Summer in on the picture too. 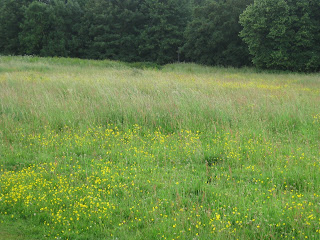 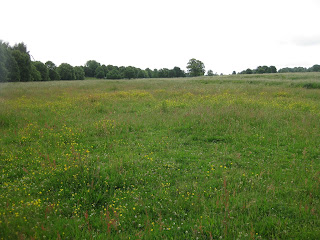 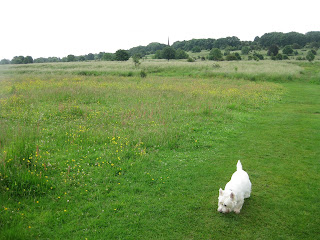 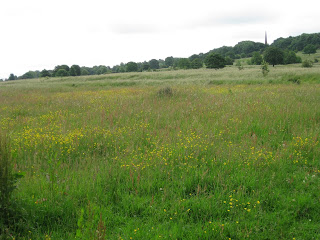 Hope you are all well as you can be, all the best Love Gill.