A quiet day, Lindsay came round for Dads day. We sat in the garden most of the time just talking. She was on her own so no children to interrupt. I hurt a lot today if only I could get more sleep I think that would help, but at the moment that's not possible if it ever will be. I nod off a few mins in my chair and it is only a few, mostly when the adverts are on. A lot of the time pain wakes me up even in the chair. Most nights I am awake a few times, even when I don't go to bed till four or five am.

A lot of shaking of my legs and body today, almost at breaking point I think. I worry when this happens as the seizures are never far away. I have taken as much pain medication as I dare and still the pain persists. Maybe tomorrow will be better.

Not at Pilates again I don't think my body would take it.  I have a ten mile round trip as well as an hour of moves. Hopefully next week.

I went into town to get Andrew something for his Birthday, did quite well I think, but its what he thinks. As what I like, is not always what  he likes.


Happy Birthday Andrew he liked everything I got him as well, so that's good. 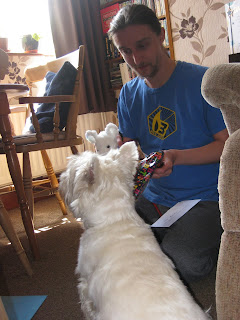 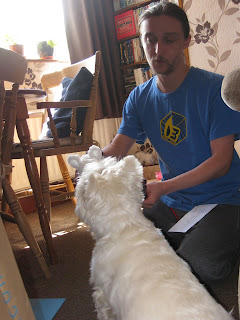 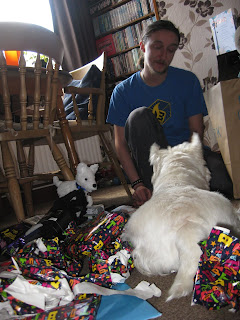 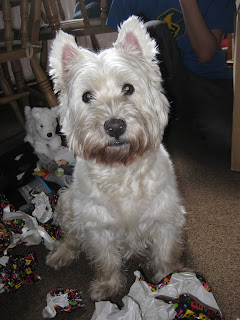 I wish it was my Birthday. 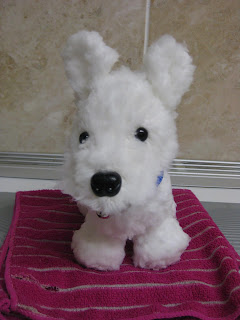 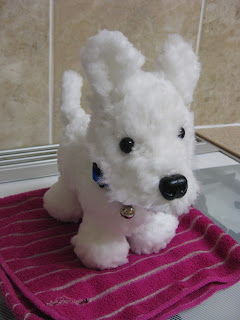 A little Pup I made for Andrew.

Joy is here for a visit. I have not seen her for a while so that was nice for both of us. I caught up with all her news as she has bean away for three weeks on holiday.

Andrews friend Tank came round later. We had an Indian meal to celebrate Andrew's birthday, nice it was too.

Age UK only two in the kitchen today (usually four) so a bit hectic, not many waitresses either and we were very busy. No cappuccino machine either as there's not enough trained staff to work it .As you know I am not allowed to use it now.
Left knee is very painful and its quite hard to walk, but walk I have to, as buses make everything worse. Still too much pain but I think its going down a bit to my normal.

Lindsay came round after dinner without her tribe. She was pleased to have time on her own. Jay-Jay is having girlfriend  problems, Tommy-Lee getting into fights. They were with their Dad going to see Grandad Sid. Soon they came back and the peace was no more, well two of them did. Jay-Jay did not go to see his Grandad. He popped in later though.

Started making two very furry teddies for presents, these are quite hard as the fur is so thick.

I have managed to get an appointment with my own Doctor, Doctor Mehta. Its a waste of time going to other Doctors as I spend a lot of time explaining about the RSD. I go to others if it's non RSD related of course. I had found something on the internet that I thought related to the neck pain and tenderness I get. Dr Mehta agreed with what I had found. OCCIPITAL NEURALGIA. I have bean given tablets to see if they will help CARBAMAZEPINE 200mg, one a day. At last I have found a answer, this has bean going on nearly as long as my RSD. Shooting pains and tender spots on my head. The pain can strike if I turn my head or just when it wants. This can paralyse my neck and head for a while and is extremely painful.  Hope the tablets do some good. He looked at my knee and said it could be nerve pain.

Cleaning up in the morning, Lindsay, Paul and I set off to sort out a few items to finish off the kitchen and for bathroom. Lindsay wanted a lot of DIY bits for her bathroom, the children are away with their Dad in Spain so a good chance to get things done hopefully.

I had to come out of the store as I could not cope with the heat and noise in there. I felt like I was going to explode, very dizzy as well. My body does not do too well with heat changes so it panicked. I think the new tablets had a bit to do with it as well. All was not lost as Lindsay got what she wanted.

Early hours of the morning bad stomach pains, then I was violently sick so much I wee'd  my PJ'S. My stomach felt a lot better after but still dizzy feeling and far away. Was it the new tablets?

No Pilate's again, I was hoping to go today but I think my knee is still not up to it. Went shopping instead and this time got most of what we wanted. The stores we went in were cooler than yesterdays ones so I was able to cope alright.

Age UK again. Jenny not here so working with the boss. This was a bit weird to start with as she was the one I had dealing with over the tablets. Things were OK and she made mistakes on the till so she is human after all. A good day busy but not manic.Very warm like it has been all week so I think that kept a few away.

Blue sky not a cloud at all, this stopped like it all day very warm again.

Paul and I are sorting out a big cupboard that we keep just about everything in from cups and plates to shower gel, to Summer food and treats. This holds an awful lot, we put in the new things we had bought, saucepans, plates and bowls. All the other are goings to Lindsay as still all good. We are swapping grills as ours beeps. Summer does not like it, getting very upset. Lindsay's does not beep.

Well not as good this month, but not the worst, bit scary with the shaking but the seizures stayed away. Hope things are good with you all and you are enjoying the British weather that is if you live here. All the best love Gill