How do I feel, a bit numb I think- Ben was a good friend and a Gentleman. When I held his hand it brought back my own Dads passing, as I did the same for him holding his hand as he slipped away.
I think both Ben and my Dad both died partly of a broken heart. Ben for Cilla his Wife, Dad for my Mum, after she passed away eight weeks earlier..

IA dinner today a lot went, 25 in total. Most of us wore Christmas jumpers or tops. Very noisy with a lot of conversations going on. A good meal and good to catch up with everyone.

Andrew and I took Summer out for a walk I felt like I needed it. Summer enjoyed it anyway.

I have bean looking after Andy's cat while he is away. There used to be two but not now, Cowley got attacked by a swan and it injured his bladder and tail. Seemed strange without him.

Sorted out the cakes today and put marzipan on them as one is being picked up on Thursday. Next the icing in a couple of days.

Very sharp frost to begin with, at four this morning there was none, so must have turned very cold after that.

Iced the cakes they look good I think.


Cleaned up downstairs. My knee is very painful today and I have to be careful how I walk and not to twist it.

I was surposed to be getting my knee looked at today but it was changed. Hopefully next week.

Made some small sponge cakes from the egg yokes that were left after the icing from yesterday. (you only use the whites) These were very tasty and light.

No Pilates today- rained hard most of the day, it would have not bean a nice journey for me on my bike.

Angela came round for a chat and later so did Joy. We all had a good talk nice for the three of us to be together for a change.

My friend Beeston Bev is here, ages since I have seen her. A lot of catching up to do and a very enjoyable day, we als exchanged presents. She took her cake, my present to her and Dave. She said it looked very nice. I forgot to take a picture of them so there are only three cakes here. 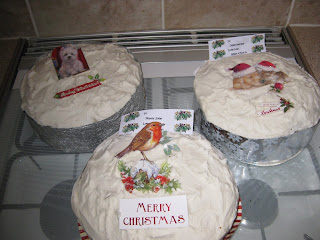 My Dads Birthday if he was still here I still miss him a lot.

Age UK when I finally got there, six trains in all one freight train with 59 trucks. Waited at the gates for ages. No sooner had I got through the gates, more trains were coming. (Lincoln has a train level crossing on the High Street)

Age UK was steady so that was good. The Christmas Market is on for the weekend so I think all our customers are there. I put my name down to help at the last of the three Christmas Party's next Friday. Jenny was pleased. Last year I had to leave as the noise was getting to me and causing me pain. Hopefully this year I can cope better.

Changed the bed to day and washed the bedding I was able to put it out as it was sunny and windy. Not for too long though as it rained later.

Summer's leg is about right now, apart from when she has bean laid down then its a bit stiff. I am so pleased as I thought it might have bean broken like I said in the last Blog, but she is fine even bean playing with her ball.

I am knitting some bits for presents so will put pictures up at a later date after Christmas.

In town today getting Christmas presents I did quite well too. Rung Paul up to get a lift home as my  thee bags were heavy. My knee is not good today hurts a lot and is very tight.

Feels very strange without Ben next door. I thought I heard him coughing last night.There are no light on when I go past all in darkness. I know its what he wanted as he had no quality of life for the past two years so its for the best and he was a good age ninety four, but I still will miss him.

Very cold and foggy when we walked back. We could not see the Cathedral at all. Pleased to get home.


YES the Hospital appointment At Kingsmill near Nottingham this was a huge place and very bright inside and out. I saw a very nice Surgen called Mr Joby John. I had three xrays of my knee. The Doctor is quite reluctant to operate because of my RSD. He suggested an alternative. I did not know there was one. An injection straight into my knee just at the side of the knee cap opposite side to the main pain area.  I said yes I will try it, what have I got to loose, nothing-- if it works great if not the operation goes ahead. Doctor Metha did not think an injection would be possible.


The injection needle was very long and went in most of the way. Yes it did hurt but no more than a bad B12 injection. The knee straight away felt very tight and quite a bit of pain.  I got a plaster too, he did say the pain could get worse before it gets better. 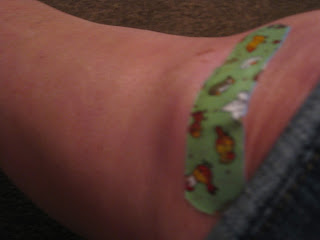 Not very clear but ducks and chickens on my plaster.


I was asked to sit in the waiting room quietly for a while just to make sure everything was alright.

After that we went for a cup of tea and a sandwich these are so much cheaper here than in Lincoln County Hospital. A much nicer Hospital all round I think, made me feel very calm and not rushed like it is at Lincoln some times.

Julia Ben's Daughter came round and round me a bouquet of flowers and a card to Paul and I thanking us for everything we did for Ben over the last few years. I said I would do it all again and I will miss him so much. I said to her I keep thinking I can hear him coughing. We all knew it was going to happen soon but still it was a shock when it does. 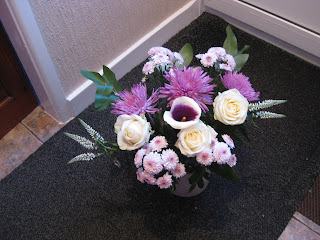 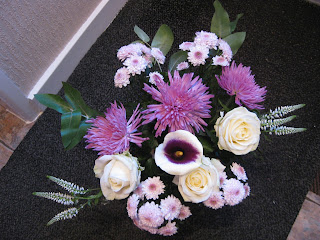 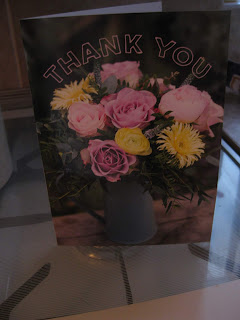 Age UK Party the third party of the weak so the last one. All went well, Jenny bought me some raffle. tickets but I did not win. I was looking after some tickets for the Mayors wife and she won, I went up and got a beauty gift set for her, nice it was too. The Mayor's number came up twice as well. The music was not too loud this year as last years then it was very loud and distorted- as the speakers were not set up right. This year a Choir and a lady was singing, both very good too. After we got our Christmas dinner, not the best as it had bean kept warm for around an hour but still good. We have to pay now for our meal so a free one is always good.

What a bitter cold wind it is today straight from Siberia, biter cold on the common. Even feels cold in the house.

Lindsay dropped off Jamie-Lee and went shopping. We played with the Lego and made a mask and did some colouring. Lindsay picked her up and off they went home.

Paul was soon home from watching football he said it was very cold.


Not too bad this first part of the month apart from my knee that is. The pain is still setting off the RSD. At night when I just want to rest, the pain really seems to get worse but the Doctor did say it would get worse first, then hopefully improve.


The very best to you all and a Happy Christmas. Love Gill.