Eye test today the optician said my eyes were good and have improved since the last test. They were damaged when I had the seizures in and by the pool on holiday August 2016. Left eye the worst as it was scraped. My eyes took a long time to recover needing two new stronger lots of glasses. So its good news all round no test for two years.

Sorting out the garden which has bean neglected this year. Got all the dead plants and weeds into the green bin. I took a lot of cuttings of fuchsias and put them in the greenhouse, hopefully some will take root. Some will be for Wayne's garden as there is a lot.

Summer had her haircut today looks like a little pup again. So soft and white. 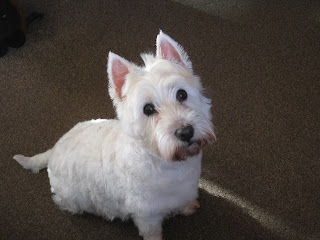 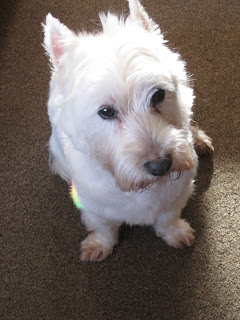 Spoke to Doctor Metha about my knee (this was a phone call not a visit) he said it will need surgery, whether keyhole or more major he does not know. I asked him about muscle relaxants and he said for me BACLOFEN is the best. I still have some from last time so I have started taking them, only one a day to see if this helps as only a little help needed.

I like Doctor Who and have bean watching this, I am not sure about the new one- Jodie Whittaker.    A lady this time but, we will see, this weeks was good.

No Pilate's today knee quite sore. I can not get it to stop hurting at all.

Played Scrabble later with Andrew and Hannah. A good game I won by one point. I kept getting vowels, seven at one point. Andrew had none.

A lot of pain in my legs when I went to bed.

Met a lady on the South Common that rescues Westies and she had a new one. This dog lost his lady owner, she went into Hospital and never came home, then was mistreated by her partner, not being fed and was hit. Poor dog first he looses his Mum then gets mistreated. If he did not want the dog why did he not bring it in sooner had it not suffered enough ?
Anyway it's doing well now he came right up to me and was getting some fuss. All her rescue dogs have come to me for a fuss but not to anyone else. Maybe they sense kindness.

AGE UK very busy today every table taken up all the time. Even when Jenny and I left at 2-00pm there were still 4 tables in use. Bit of shopping then home. I got myself some new pyjamas soft and fleecy so should be warm, might help my legs keep warm too.

Very tired, more exhaustion I hurt just about everywhere, RSD is having a field day with my knee. Even the right one now hurts a lot. Just leave me alone a bit will you. I have forgotten whats it like
to have no pain.

Got a letter from the knee consultant cancelling the appointment-- what this time booked into bum surgeon or something. The next letter I got on the same day gave me a new appointment for the next week. When will I see someone hopefully then, unless.!!!!.

Went to the crematorium to see Mum, Dad and Phillip- I put on some flowers. Stopped a while then Summer and I headed off home. On the way back Summer got tired and I decided to carry her a bit. A fair walk for her and her little legs I picked her up, and she jumped and slipped to the floor. She seems alright but later on limped and was hardly walking. I thought she may be broken her leg.
I pressed it but it seemed alright. I decided to hang on going to the vets and see how she went on.
She did improve but was in a bit of pain.

Summer's leg I think is a bit better she is still limping but is using it more. Gave her a rest no walking on the common today.


Shopping today with Paul. Got a few presents for Christmas.

More improvement with Summer's leg. I am so pleased no vets trip needed this time. I think she had pulled a muscle.

Making bread today, I could not make out the quantity needed-- it might as well have bean in Chinese. Put in too much salt.  My mind could not work it out at all. I am told this is BRAIN FOG common in RSD. I know this is happening more now than it used too. Also staring black out seizures. I hurt everywhere, standing, sitting or laying.

Hell of a lot of pain in my joints never letting up at all. PLEASE STOP I HAVE HAD ENOUGH.

My face to face with Doctor Metha has bean changed again. When I see him it will be now on 11th December and the next day for my knee unless it's changed again. I was hoping to see the knee consultant first but at this rate I will be lucky to see anyone.

Took Summer on the Fairground Common as its flatter. I have bean going down Sincil Bank the last few days and not very far either, better for her at the moment. Her leg is good, hardly a limp now but I can see its not quite right yet.

My knee is very tight and sore today even when sitting down the pain will not stop..

Age Uk very steady almost quiet but it was nice not to be rushed off our feet.
The volunteers coordinator has left suddenly, she will not be missed by us the volunteers as she was not a peoples person and hardly spoke to us..

Squidge came round and asked me to look after Ben and Emmie (two doors away) for a few hours while they went out, I said I would. Another knock on the door a bit later, and Ben's (from next door) carer was stood there. She was worried about Ben as he was unresponsive. One of Bens relations came later and we both stopped with Ben. I held his hand and talked to him giving him the occasional kiss on his head. We ended up calling an Ambulance as we could not get any of his close family on the phone. He was not good, but they did not take him to hospital. He is coming to the end of his life. I got to look after the children Ben and Emmie a lot later than expected.

I went back round to next door later, and Ben's son was there. I said if you need me I will sit with him. His other son arrived later so I was not needed. I went to bed around 5am but could not sleep for a long while.

Ben slipped away around dinner time. His same carer came round very upset as she thought he had gone.  I gave him a kiss and held his hand to say good bye. We phoned 999 and they came to sort him out and confirm what we had thought.


REST IN PEACE BEN YOU WILL BE MISSED.