After Christmas and New Year. (1)

After Christmas and New Year.

Kayleigh arrived at Newark station, Paul and an excited Wayne went to pick her up. Good to see her again.

I feel very drained today, hot and cold probably overdone things a bit so my body is complaining  loudly.

Not feeling any better after a hot night for me and pain. Later I went to bed for a while so I hopefully would feel better. We have family coming for tea. After a rest I did not feel any better, worse I think. Hopefully things will be better tomorrow. Chatted to Wayne and Kayleigh but felt very strange.

Not a good start passed out on the stairs and bashed my head. Not any better than yesterday as I hoped. WORSE.

Wayne and Kayleigh had decided to go home on the train not to be taken by Paul. He then can stay with me. I was mad, that I was not feeling good. Wayne could not take many of his presents, so that made it worse.
He phoned us up later and said he had somehow slipped between the platform and the rails and hurt his knee. Poor Wayne hope it's not too bad.

Well last day of this year- what will next year bring? I am feeling a bit better but still not right.
I will not be sorry to see this year go as not the best. My knee opp, Paul back opp, Tommy-Lee's accident, plus Andrews's attack has not bean the best year. So next year hopefully will be better.

Around 3am I decided to go to bed. Did what I usually do--- then tripped over the flex from my recliner chair and went flying falling face down in AGONY. I think I hit my right wrist on the table leg, or fell on my wrist. My hand was hanging down, like it was not connected. Summer was licking my face. I screamed and screamed, the pain within a few minutes was full body.

Paul heard my cries and came down. He could see something was very wrong, Andrew also came down and tried to calm me. Paul rang for an Ambulance but there was a wait of around 3-4 hours. An hour or two for a paramedic..Paul decided to take me in the car. I was still on the floor and had to get up. The pain was the worst I have had for a while. I screamed every time I moved. After about 20 mls of OXYNORM and quite a while later I was able to get off the floor. Somehow I got into the back of the car half laid half sat. No seat belt on.  Paul had put a pillow around my arm. This did little to help and the pain was just getting worse. I felt very sick and was pleased when we got there. 46 people waiting most of them with bashed heads or limbs. An awful lot were drunk- the waiting time was 3-4 hours. An argument was going on between some of them so security had to step in to calm things down.

I felt very small and vulnerable thinking I had to sit there for that long. Paul went to the desk and told them how bad it was. I think they could see how much pain I was in. I was seen soon after.

The Doctor looked at my arm and just turned it and I screamed. He decided to inject it with LIDOCAINE to numb it. Waited a while and tried again but the same, he said there must be 2 breaks. Some more LIDOCAINE and GAS AND AIR, my hand and lower arm was dead to pain and any feeling. Off to X RAY. This made me feel very sick and light headed.

Back  to the Doctor-- 2 very bad breaks and nerve damage he thinks because I could not feel him touching my fingers. I would need an operation, today hopefully. Next a plaster on with the GAS and AIR. The LIDOCAINE was wearing off. The Doctor had to reduce it, (pulling it hard to get the bone in line again.) Very painful even with the GAS and AIR.

Waited for a bed on a ward, surgery I  found out would not be today first off tomorrow.
My fingers were black and very swollen, it hurt a lot now as the LIDOCAINE had worn off. Now in a very quiet ward with 3 other ladies.

The plaster was too tight now with all swelling. They had to cut the plaster halfway or I was in danger of losing my fingers. My daughter Lindsay helped them by holding my arm. More screams from me. By now my arm was in a sling type thing on a stand with my arm up right. This was to reduce swelling not much protection for the breaks though. A Doctor came to check my arm and said its still swollen. We need to cut it all the way down. Now I had no protection to my arm and it hurt like hell.

Soon after a Doctor (I use the term loosely DICK is more of a word I would use) came and twisted it round while in the sling. I told him if he touched it again I would hurt him, he said he was sorry. This hurt like hell for a long time. The rest of the night was not good I could hardly wait for the operation time to come.

Time has come to be taken down to theatre. Usual questions then in. The next thing I knew I was in the recovery and in pain.The Doctor gave me  pain medication through the drip, and said it would work almost instantly. This did not so I had to have the maximum amount. Soon I went back to the ward and was told what the Surgeon had done. My arm was manipulated and the 2 broken bones wired, to hold them together. I knew that they would use some sort metal like plates screws or both, so this was no surprise. Hopefully the pain and swelling will be less now and a better night. 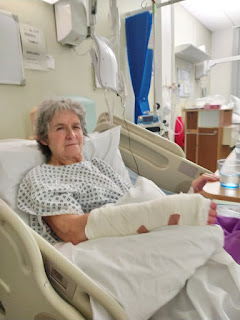 Going home to day later after dinner so pleased, I have bean given a cuff like sling to wear and instructions on what to do and look for if things are going wrong. The car journey was not too good but hell of a lot better than when I came in. Summer was so pleased to see me. Poor thing she has seen me go so many times to hospital, and she never knows when I am coming home.

A lot of pain most of the day, fingers are like very fat sausages. At least I have strong pain stuff, one thing where having RSD has sort of helped. I am having to go to bed when Paul goes so lay awake for a long time. I can listen to music but it's still a long time from my usual bedtime. PAIN-PAIN-PAIN all night it would not go despite taking a lot more MORPHINE than I should have. I think the RSD has a lot to do with it.

Pain and swelling is up and down but still a lot more pain than I thought it would be after surgery.
I am typing all this with my left hand, this is a lot slower, but its either this or nothing. I have used this hand for quite a while now for carrying things as it's safer than the right which lets me a lot.

Andrew is improving but still off work a bit longer. Police are still investigating. Hopefully soon they will have something to tell us

I Will update this Blog every few days so you know how things are going.
All the best love Gill.