I actually did some cleaning today- the bathroom. All done with the left hand and it took me twice as long but is was a good feeling to be doing something at last.

My wrist is still very painful and not able to hold anything much heavier than a magazine. I can not place hand flat or turn it over. Seems to be like fixed at the wrist. Keeps going into spasms, still very swollen, different colour to left one, but apart from that OK.

Lindsay and Jamie-Lee came round in the afternoon. Jamie-Lee has had a cold but is feeling much better than she was. We played with the Sylvianian's house and families, we both had a nice afternoon.

Started doing another puzzle, one of 8 Paul got me for my Birthday.

Andrew is back to work today 1-7pm- after his attack. Hope he will be alright I know he was a bit anxious. I think after today he will feel better.


I finished off the puzzle quite easy one to do. 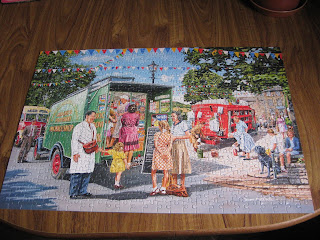 A very cold day, snow is further north so we might get some.  Nice walk with Summer playing with her ball.

Going into town to see Polly as its her last few days at Age UK. Jenny and I got her some flowers and a card. Saw every one that works there, good to see them all. Cuddles and hugs all round. Some of the customers said they missed me. Not as much as I have missed them.
I said hopefully I will get back at some point-  but that seems a long way off at the moment.
Paul and I both had some dinner there. Bit off shopping then home- quite tired now.

Finished off another puzzle same group as the last one, they are both very colourful. Also I went back to the puzzle I gave up on a few days ago, and I managed to finish it at last. 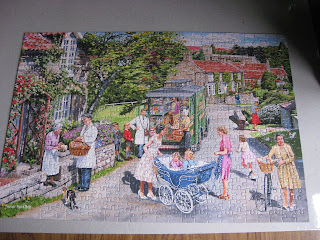 Another nice picture from the past. 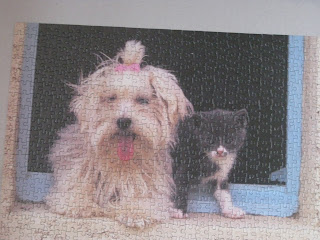 Done!! at last, did not think I would be able to do it on my own.

I am getting very frustrated and bored, I wish it had bean my foot I had broke and not the wrist. I only had just about got back to my normal after my knee operation. So freedom was not for long. At least I can get out with Summer now. Just every day things are so painful to do.

Summers walk was down Sincil Bank today, as every where else wet and muddy. Not too good down here either river quite high.

Wayne had snow overnight- wonder if we will get it. He said it was very cold there too.

Done all usual exercises not really any difference, still hurts the same. Doing most things with left hand as right one goes crazy if I try to use it. It now hurts from shoulder to fingers. My nails are twice as long on this hand, plus the colour changes too. I am trying hard not to think about RSD too much, and just put it down to temporary nerve damage which it could still be. This is not easy as I know how brutal it can be. I am doing all I can to keep it out, and from getting worse than it is.

Well check up at Kingsmill for my misshapen knee. Hope things are good and I will no longer have to go any more. Straight through  journey there. Painful for my arm and rest of body. I have cushions for my feet and one for my wrist plus I wore my sling.

Did not see Mr Joby John this time but a Nurse Practitioner. She had a good look at my knee and said it was fine. Come back in 3 months, I said is there any need as its a long way to come around 40 miles, about an hour plus. She said no, so long as you are happy. Any problems get in touch with your Doctor. Good I said, and thanked her. We had some dinner at the little hospital cafe.

Going  home was very different-- a detour and lots of traffic. Took 3 hours or more. A pheasant flew up towards the car and we nearly hit it, it stood on the grass looking at me quite shook up. I am very pleased we missed it.

A lot of pain later in my wrist and arm, took quite a few tablets be for the the pain settled.

Paul gave Summer a bath she looks so clean now and white, ready for her trim on Monday.

Jenny is here today after having her hair done near by. Looks very nice too. Talking about Age Uk, Polly goes tomorrow and there is no one to replace her. Gwen could go any time too as she is only there till they get a replacement for her. The kitchen will be very pushed to get things done.

Jenny phoned up and said Gwen had left, had enough. Polly too now has gone so 2 in the kitchen. She said they had a buffet this week for around 20 people. I think they are going to be very busy as no replacements are on the way.

Well I hoped this month would have changed a bit regarding my hand but it was not to be. Maybe next month will be better.  Hope things are good with you all. All the very best Love Gill.