Finished off another puzzle this one is a WASGIJ one usually they are quite funny as this one is. 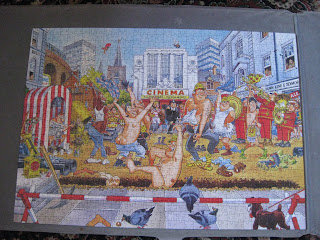 Summer had her hair cut, looks very smart again. I think she also looks younger too. I know she has bean behaving like a Pup again- crazy dog. 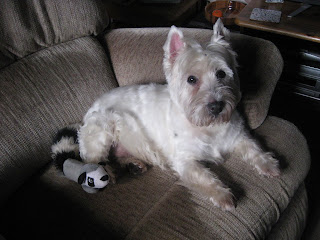 Doing last months Blog- sat at the table as usual near the window. I looked up and saw a cat on the bin. Paul had left the lid up, the cat was perched on the side trying to reach something that was in the bin, nearly falling in a few times. He then saw me, and instead of running away, he just looked at me through the glass. He is a very pretty cat as you can see. 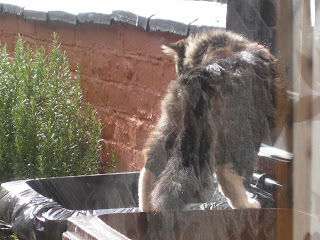 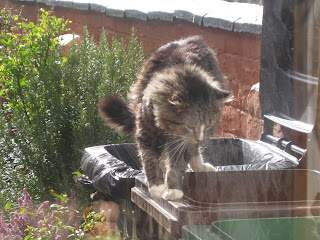 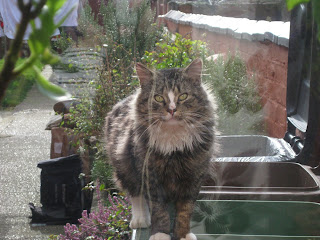 My Daughter Lindsay put a tap in her kitchen all on her own, even taking the old one out as well.
Well done Lindsay you have my spirit. Paul was going to do it but she ended up doing it on her own. 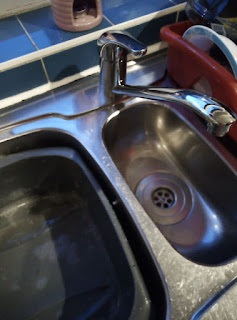 Watched Star Trek with Andrew, 2 episodes brilliant. My Mum loved Star Trek when it first started with Captain Kirk and Spock. We used to watch it together, around 50 plus years ago. Good then and still good now

In town getting a bit of shopping. I did not realise how much my hand would hinder me. Putting shopping in the bag, getting money out and putting the change back in my purse. I had to ask for help in every shop.

Got Jay-Jay a few things for his Birthday, already got him a bag that he and Lindsay picked out last week. Out tomorrow for a meal with him and family. This will be the first time out for a long time.
Noise and just the amount of people now can really make the pain and spasms worse. I just hope it will be quite.

Hand not really any better than it was, there was a few days where it improved slightly this has not lasted. Spasms all the way up my arm if I lift it. The burn and colour changes, hot cold it's all there. I remember when I first did my foot and was told it was RSD, it was 1 step forward and 2-3 steps back. Still not sure if this is RSD spread but I think it's very likely now. If not RSD spread, its severe nerve damage, hopefully I will know more on Monday 16th as I see the consultant then.
I managed to get on top of it then-- can I do it again if I need too.???

Reasonable night good to see everyone together. There was one man that was very loud and that raised the pain levels quite a bit. The music was also a bit higher than I would have liked, but  we  were near the speaker. Could not move as all tables full. A good night anyway, Jay-Jay enjoyed himself so that matters the most.
Andrew got him a necklace with a kangaroo on it- as he is mad on them since he saw a baby one in its Mother's pouch.

Did a little bit in the greenhouse but its hard going with a almost useless hand. Soon be time to get it ready for the tomatoes and cucumbers. Last year they were in very late- this year I hope to get them in a lot earlier.

Paid for it later with spasms and pain, fingers swelled up and were very hot. Pain from fingertips to shoulder. I will be very pleased when things are more normal. Just hope they can be.

Angela called in to see Paul as he gets the Meerkats coupon for half price tickets with his insurance to see films. She and a friend are going to see Military Wives film tomorrow.

I printed off some information about RSD as her friend does not understand why I do not go with them. I have tried to explain but it's not easy for me, or for them to understand as it's so complicated.
The noise and the flashing light would do me no good at the moment if ever. I would probably leave there in an Ambulance after having a seizure. This would spoil the day for everyone something I would not want at all. Hopefully one day I will be able to go with them.

Not a good day terrible spasms from fingers to neck. Hand is very stiff and tight.

Angela called in after her pictures and said it was good and they both enjoyed it. They both thanked Paul for the coupon. 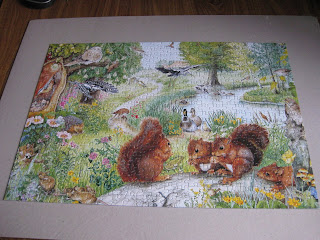 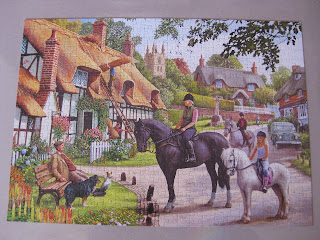 Today is PIPS TRIBUNAL DAY to see if I am entitled to PIPS. I was asked lots of questions from 2018. I first applied for this in 2017 after my DLA was taken away. This has gone on and on till now.  Many phone calls only to be told it would be soon.  At last it was today. The decision would be posted to me. All the questions were as I said about 2018, then why did they ask about how I got there.

The pain I was going through while in there was bad. I took extra tablets but they had little affect.
Now its awaiting game.
13th

Managed another puzzle, all the puzzles are done mostly one handed- as hand still not responding.
I think my appointment on Monday is still on. A lot of things are getting cancelled now because of the Coronavirus.

The more days pass I think this is RSD spread to my hand, all the signs are there- but there's still a slim chance it might be nerve damage. Not as many spasms today if I am careful.

PIPS results back- 1 point off getting it. All this time to be told this over 2 years waiting. 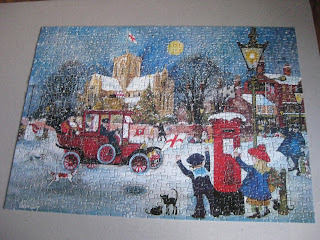 Another puzzle done- I think these are the only things keeping me sane. More so now after the PIPS result.


Still not a good start to March and I am still in pain. PIPS decision did not help much either.
Hope you are having a better  time than me-- all the best to you love Gill.