My appointment with Doctor Solinas the Neurologist was canceled but I was pleased, as then I did not have to go out to the hospital. I thought it would be replaced by a phone call but was not. It's a scary time for everyone at the moment.

My wrist still much the same; spasms going to shoulder and neck. Very painful even after the spasms have stopped as arm very tight for a long time.

Nice walk on the common with Summer makes the day worthwhile.

Did the washing but not able to put it out so I had to get Andrew to help me. Paul not well at the moment stomach bug or something like that. I have had a bit of a funny stomach too.

Washing all dried so just the ironing left-handed at the moment. I dropped the iron twice but I got used to it. A lot safer than my right hand at the moment.

Cleaning up a bit and doing another puzzle.

Quite a bit of pain today spasms too, finger swollen, nails still long and strong.

Finished off the puzzle all the bits there too so that's good. 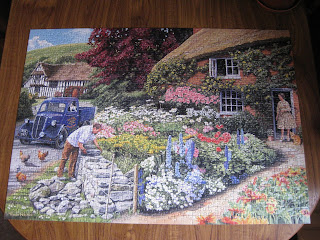 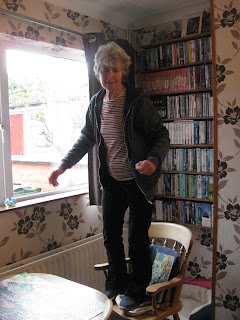 Trying to get a good picture.


Paul is still not too good passed out as lack of food and a bit dehydrated  I think- So he is spending the day in bed instead of going up and down all day.

Got Summer some calming spray as very anxious at night time still. You rub it on her, or the basket, hope it helps a bit as its not good for either of us, me having to come down to see her 2 or 3 times a night.
Later on at bedtime she did seem more settled so hopefully we will have cracked it.

Summer was better overnight so that was good.

Paul got worse so he was taken in to hospital. Found out he has GASTROENTERITIS with DEHYDRATION. Put on fluids and rest- hopefully he will be out soon. Not a good place to be at the moment.

Summer was not as settled last night but not as bad as she has bean.

Another lovely day at least the weather as bean just about the best it can be. No world virus to spoil that at least. Sprayed the roses as greenfly, with all the good weather. Cleaning a few cupboards in the kitchen. Getting quite bored of puzzles now.

Paul about the same just fluids and rest - no visiting at the moment due to the virus. My arm and wrist are not good, but I need to keep it going or things will get worse and the hand will be useless.

A very warm start but heavy air- not as nice as yesterday. Maybe a storm later that would be good as I like storms.

There were more people than normal on the common today, some that had never bean on it before. One person did not know that there were horses on there. Another did not realise how beautiful the common was. Saw a total of 7 squirrels today. I said to Andrew, that I had not seen many this year. Some people do not like them but I do.

I think with this lockdown more people will be heading to commons and open parks just for a walk and to stop the boredom. Some might keep it up afterward but I'm sure many others won't. Though at least they know now what there is on their doorstep. People are keeping their distance too but still speaking to one another. We are lucky as another park close by too.

Cleaning up downstairs not sure how I will get on doing the vacuuming as not done any this year because of my broken wrist. Andrew said he will help, he has bean doing the cooking and putting out washing with me. So thank you Andrew. I managed to do 2 rooms so the rest tomorrow vacuuming did really hurt my wrist and arm but I need to do it as the RSD is always waiting to get stronger and take over more of me. I think it has enough already.

My daughter's ex-partner dropped off some meals for me. I thought that was a very nice thing to do; so thank you. Andrew is a veterinarian and does not touch meat at all. Big thank you to Andrew for looking after me too.

Paul is improving and out of bed just needs to build himself up and get stronger.

My arm and wrist hurt more today after cleaning up yesterday but as the day wore on the pain got less. The spasms did not, shooting all the way up to my collar bone now. Doing the bedroom today but not a Spring clean- went quite well a lot of pain but I could cope.

Well another mixed-up month but these things make you stronger. I look forward to better times ahead. All the best to you all and look after one another. Love Gill. x