A bit colder and very dull and overcast. I have started knitting a baby cardigan for Peter and Jenny's baby. This is a very pretty lemon yellow one, in my favourite pattern, it will not take long to do as a small size.

Saw some more chicks on the river while on Summer's walk. Not seen many this year this being the only second lot this year. At one time there were loads of little chicks on the river. I this a lot of the ducks have moved on. Lindsay came round later with Jamie Lee. Jamie Lee had got a bike computer from her Dad. Lindsay put it on for her she was very pleased. I have had one on my bike since I first got it in May 2008.

Saw Peters and Jenny's new baby today and she is so cute. I had bean in the garden, so I did not get a chance to hold her, as a bit mucky from weeding and things.  They will come back another day and maybe come in this time as just spoke on the doorstep. They thanked me for the things I made for Prisca a pretty name for a very cute little girl. 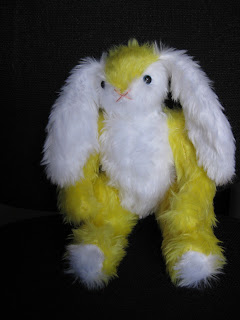 Little rabbit I made. 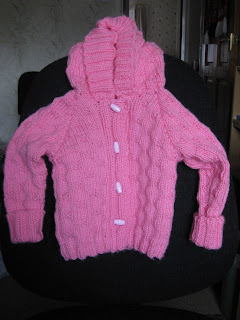 Jacket to fit a bit later. 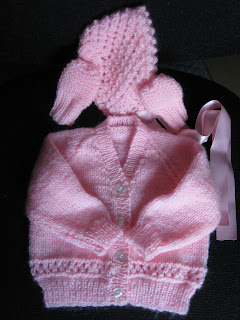 Cardian plus hat and mitts.

Got some more wool yesterday for two cardigans I am making, one for Emmie and one for Jamie-Lee. Also another ball of lemon for the baby cardigan. I did think I would make it with one ball but no, I ran out. Only needed a bit as well never mind I have more for other things. Got three tomato seedlings up so that's good as I thought at one point they had got lost. More will follow hopefully. Jay-Jay my Grandson called in later on his motorbike he is the oldest one eighteen now.  Had a bit of a tidy up of my wool, I have a lot now. I am going to knit more toys or baby things and match up the colours and use as much up as I can. The cardigan will not go to Prisca now as Jenny says she has so many. I told her I can always do her one for when she is older.

Poor Tommy-Lee has tonsillitis and Jamie-Lee has a throat virus, both not very well. Tommy-Lee has suffered from tonsillitis for a while now, but they only do an operation if an emergency. Having a bit of a problem with Emmie's cardigan doing the pattern while decreasing for raglan shaping. I will get it sorted out properly tomorrow. Looked after Emmie for a little while so Ness and Squidgy went out for a bit. It was not long before they were home again. Talked to Ness for a bit then went home.

Nice today quite fresh but warm as well lovely on the common with Summer. Had a phone call from the chemist to see how I was getting on with my new tablets. I said better no major problems this time. Ness asked me to go round to her house and sit in the garden with her and Squidgy. We just talked and listened to music. They had big fire lit as well, I enjoyed it, even though it was only two doors away.

A steady day, a bit in the garden, knitting, changed the bedding and got it washed and dried. So tired today, more pain than usual.

Ironing the bedding plus anything else that needed doing. Got the cardigan right now I decided not to do the pattern all the way up the sleeve. Hope it will look ok I think it will. Still, very tired today and the pain has not settled much.

Finished off the second sleeve of cardigan for Emmie so only the dreaded bands to do. Not very keen on doing them. Also finished off the lemon baby one. Just needs sewing up. Doing the bedrooms today still feel a bit off it but not giving in to it.

Nice walk on the common with Debbie and Kipling. Mary and Rory. Rory is such a sweet dog considering he spent two years on the streets. Rest day today not doing too much only the necessary things. Jenny came later after having her hair cut just down the road. Looks very nice too. She had a virus last week and was not too well.

A windy day. The common is looking very pretty at the moment the trees are beautiful, green and very lush. Mayflower trees are all over the common white with the occasional pink blossom. 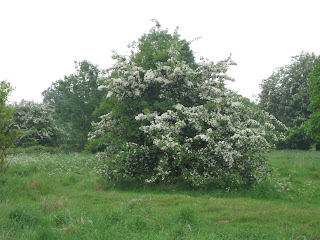 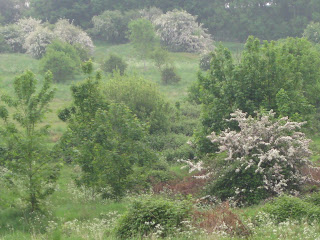 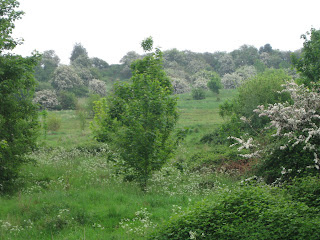 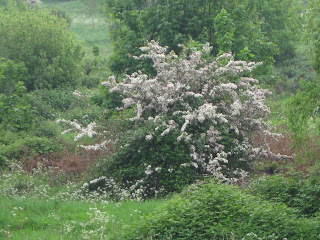 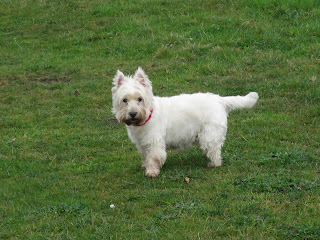 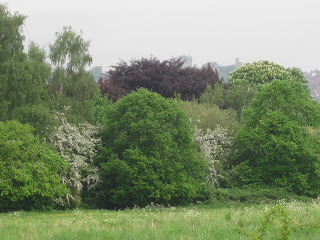 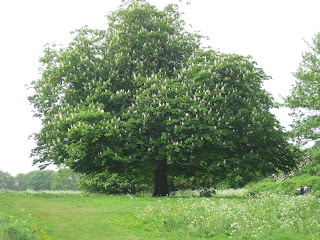 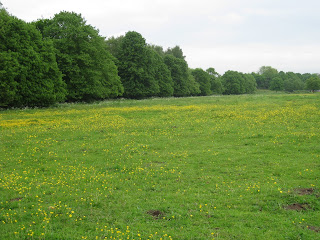 Blood test today at the hospital, this is to check things for my heart scan on the 22nd of this month. All went well only one attempt to get blood. Sometimes it's hard to get blood from me as my veins are very thin and the needle can just straight go through. After Paul and I went to get some new bedding for our bed. We had different ideas so we did well to get two lots so we were both happy.

Another warm day but so humid storms later, I do hope so as my head feels like it's going to split.

While on the common I took some pictures of the two Canadian geese that have taken up living there. They now have little chicks six of them, so cute. While getting the picture they came very close, as I do not like feathered things so this was a bit much for me, so Summer and I left them to their very cute babies. At least I got some good pictures. I was told by a few people they are feeding the geese, so that's why they came close they thought I had food for them. 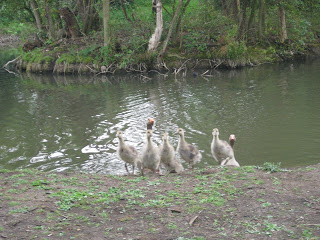 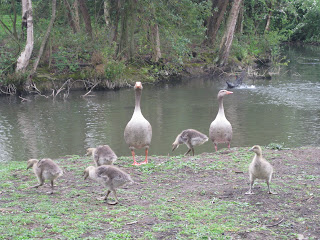 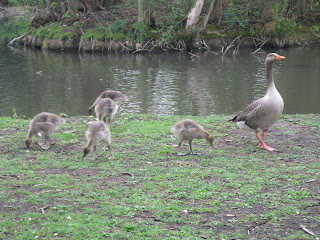 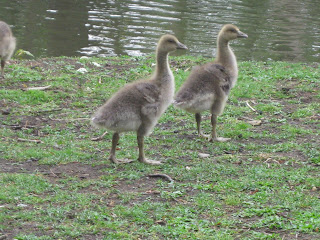 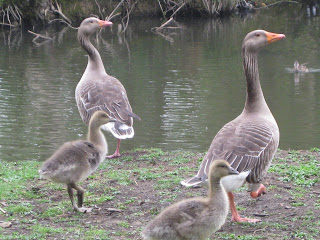 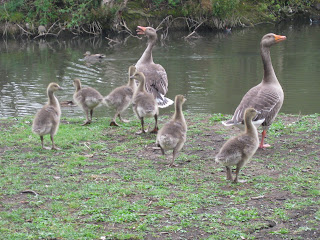 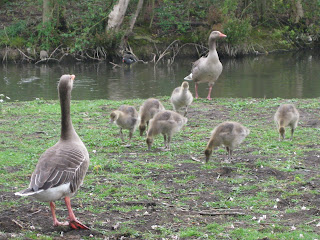 So very cute all legs.

Still very humid we did not get any storms yesterday. Tired today, I think the headaches for the past few days have not helped much. Come on let's have a massive storm to clear the air. Cleaned out some big plant pots that have bean in Karol's garden. My greenhouse is in his garden and has bean for at least the last twenty years or so. He is good to let me have it there, Karol is very easygoing and does not really care what I do. Some friends came round later with their dog Roxey. She was very good as still a Pup. Summer was very good with her as well, but Summer is good with everyone we have met.

Went to visit a lady nearby she lives on her own and is very lonely even though a lot of people go to see her. She is a very lovely lady, used to be a very top class hairdresser in London Oxford Sreet. A man who lives near her said she invited a lady into her house only for her to steal off her. How horrible is that, some old people are too trusting. I only met her myself on the fairground common a year or so ago.

Heart scan at Grantham hospital Paul is taking me there. The journey was good too, not a lot of pain this time. Hopefully, the way back will be the same. Two scans with a drip for one, all went well just getting the cannula in was a bit hard for the scanner. I did warn him about my veins, but he did well with only two attempts. Very warm feeling as the fluid was going through with a feeling of wanting a wee. We went to a garden centre after. Loads of dogs, there is a cafe where they can go, not just the dogs but their owners too. Hopefully, I will hear about my scan soon and see what's going on with my heart. Ok going home too so pleased as when went to the sea I suffered quite a bit and it's about the same distance.

I went to see my friend Mary and her dog Rory plus another friend from the common with her dog as well. A very lovely morning with them. Mary's grandson is here on a visit from South Africa, a very nice lad and has such a lovely accent. I have a bit of CYSTITIS but am taking some powders from the chemist called CYSTO CALM. They usually work quite well as I have had CYSTITIS be for.  Hope for the best as not very nice.

Powders seem to be working as CYSTITIS not as bad so I am still taking them. Looking after Emmie tonight the girl from two doors away, may not see her again regularly as they will be moving very soon. Like I said I will miss them a lot. Emmie said she did not want to go. I said I will go and see them all and they can come here. Emmie was good as usual.

Well was I wrong about the CYSTITIS, it is terrible today pain, blood, and stomach swollen, very tender. Tried to phone 111 got through, and pressed just about every button on the phone, taking around seven minutes. Only to be told due to a large volume of calls, and to try later and was cut off. I will keep taking the powders and IBUES to lower my temperature and to help the pain. I did not try 111 again.

Emmies Birthday day ten today, took around her presents she liked them. Two novelty pens and books. The little Emmie doll look like I made for her. Plus some large light up balloons in pink, they glow for days. Resting today and knitting a bit as I feel a bit rough. 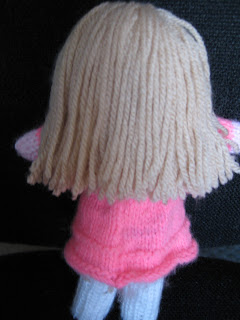 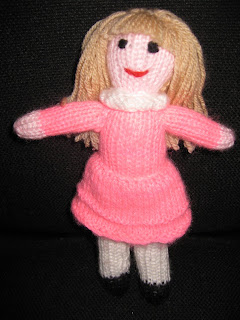 The look-alike doll I made for Emmie.

Paul got me an appointment to see the Doctor this was the wife of the Doctor I see. I had not met her be for. The appointment was at the other surgery so Paul took me. I was examined and a sample of urine was tested. I had an infection. She wants me to be seen by the hospital and have a scan of my kidneys and bladder, plus other tests. The Doctor said this will not be too long be for I am seen. I think I have heard that one, before just but wait and see what happens. I was given ANTIBIOTICS CEFALEXIN 500mg - 3 a day for a week. If the urine test shows up a different infection I will be contacted and the tablets changed. Feeling very tired so sitting down for much of the day.

Doctors today for a blood test to see how the new tablets I started for my heart are affecting my blood.

Well, another Blog published- and more to tell, some good and some not so good. The weather has warmed up most days now. So that helps me a lot, but still suffering at times. Infections do not help either. RSD does not care so we RSD suffers have to make the most of it. I look forward to mine and Summer's walk every day. Going out in the car can be very painful as you all know. So this is mostly all I have but it's one of the best.  Hope you all are well and pain-free as possible Love Gill.