We (Paul and I) set off about mid day on Sunday 27TH July. Sandy my little dog goes next door, to her "Auntie" Cila and "Uncle" Ben's, for her holiday as she is now 14 years old and traveling is a bit much for her. My son Andrew (20) stays at home. 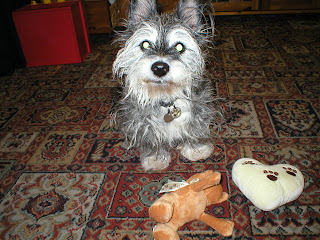 We are heading for Kessingland beach in Suffolk. The journey will take about 3 hours travel time, but we will be stopping a lot more than usual.

The journey was smooth with no hold ups I think every one had set off yesterday, the pain was pretty bad on the way, in my back, shoulders and foot.

The chalet was clean, large and in a quiet area, in fact the whole site was quiet, just what the doctor ordered. We got unpacked had a cup of tea then, I had a lay down, when the pain gets too bad the only way to relax my body is to lay flat.

After a good rest more tea. we had a look round the place the swimming pool was close so was the restaurant much to Paul's delight. We decided to have a meal there, as chip shop was closed [it was hardly ever open - as we later found out] We sat down and ordered we were told a 30-40 minute wait. that was okay.

I put my feet on a chair to get more comfy as was in a bit of pain.
After well over a hour the young man who seemed to be doing everything (he was running round the tables and getting a load of abuse from most people) came over to apologise - a waitress had gone home ill. It would not be too much longer,we said that was fine,we would wait.

Half a hour later he came back to re take the order, as things were not going well I asked if the chef had shot him self, he said not yet,they were under staffed a lot of people left and got refunds. Lucky for us not so many meals to do.
We sat it out, Paul went to get my tabs as was in a lot of pain.
The meal arrived at last, it tasted so good,when we finished we got up to leave. Out side we saw the young man who had bean flying around so much ,he apologized and said come in again and we give you a commentary meal, he was the assistant manger.
We walked back to the chalet not far, but it was very pain full, I laid flat again and let more tabs do there work.

Today I just rested still felt very spaced out and weak from every thing.

Today we are going to Africa Alive 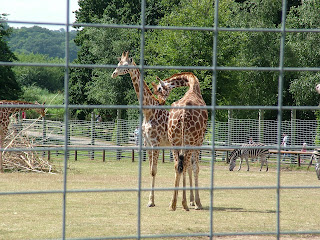 The day was very hot I spent most of the time in my wheelchair,we saw lot of different animals including monkeys, chimps, zebra, giraffes, lions, cheetahs, plus many others. 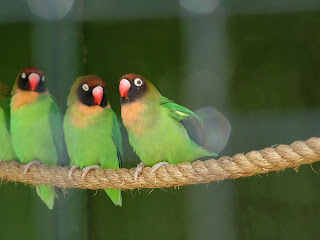 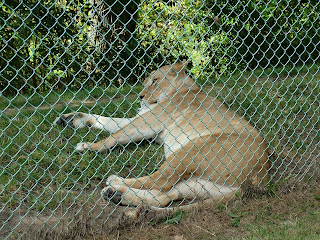 We all so watched THE ZULU NATION they were dancing and singing they were very good and so funny to watch. 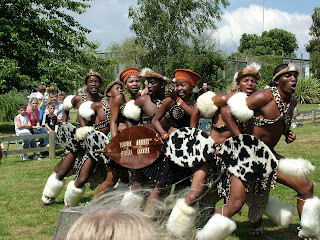 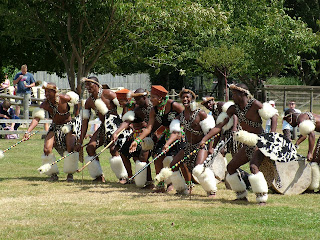 We had dinner saw a bit more then we decided that was enough for today as I was getting very tired and in pain, so we headed back to the chalet, it was very close to us, so a short journey

All in all it was a good day, I even got sun burn on my legs

Back at the chalet I had a lay down as felt a bit rough.

Went into Great Yarmouth to do a bit of shopping it was very busy, spent most of the time in my chair again. Today I felt very tired and down I think it the after affects of all the extra tabs.

After dinner we went to a place called Southwold, a very quite place with a Pier we walked along it and looked out to sea it was very peace full. Under the Pier were lots of jellyfish. We sat and had a cup of tea then headed back to the chalet again. More rest more pain. Took last PROBANTHINE tab today (for sweats)


To day we are going on a boat trip along the Norfolk Broads. The boat went along very slow, we saw yacht racing, some very old boats that had bean there a very long time. 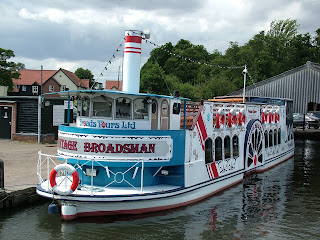 The wild life was very tame the ducks came right up to the boat waiting to be fed some were very fat. The coots were the worse even chasing after the boat for food. There was a black swan quite rare, we were told, all so Egyptian geese with eyes like Cleopatra. That's probably where she got the idea from. 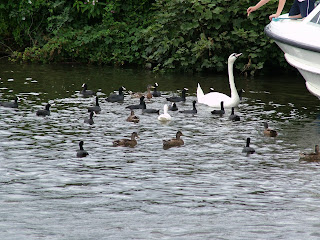 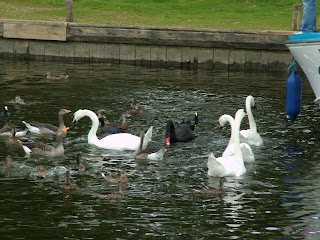 Some of the houses were very expensive to buy, around a million that's if they ever came up for sale, the posts they were built on, were hammered into the ground for 100 ft, because of the marsh land they stood on. George Formby lived there there at one time in a very big house, when he was appearing at Great Yarmouth 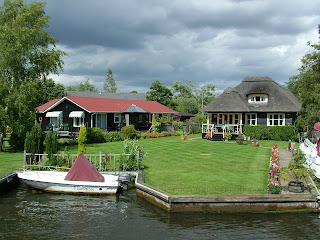 He used to live in Lincoln we were told, he bought the house there because his wife did not trust him enough him to stop there after his shows, so every night he had to travel back to Lincoln.

We also saw a ice cream boat but did not have one as was on wrong side of river. 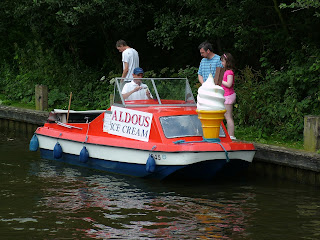 The trip came to an end it was most enjoyable. We had dinner a quick look round then set off back to the chalet again, more rest more tabs. We started packing, for home tomorrow.

Later on that night I stubbed my right foot on a step the pain sheared though my body like electric shocks they lasted quite a while more tabs, a lot later the pain was more bearable.

Lucky my foot was only a bit bruised.

The journey home again was pain full ,but I got a new cushion for my neck which helped a lot, the sweating started on the way home , more PROBANTHINE I think.

We had good weather all week no rain till night time and then one storm late at night & a down pour around 8pm. The holiday was now over but we made the best of a bad time I think.

Virus
A week after coming home I got some sort of virus. Thursday night I was all right till about 1. 30am (Friday) then started to feel very sick then I was violently sick so many times I could not stand up.

I woke Paul up by shouting him, eventually, he is a deep sleeper. He helped me up stairs to bed.
The next day I still kept being sick had to ring physio to cancel. I felt very weak, really bad head. I could not even keep water down.

I just rested & dozed all day. By night time I could keep water down if I sipped it.

Feel quite a lot better, but quite weak, PROBANTHINE does work with sweating. Got weighed to day have lost about 8-10lbs in weight since going into hospital. I think I got the virus because of being run down, nobody else in the house got it.

Hopefully I will keep well now, hope you all do too
Bye till next time.